My 07 Hawk, journeys and repairs

3 replies to this topic

OK, so I have the new to me 07 Hawk at home now, details of the quick decision and trip/truck here

I have an Xterra that has made several trips out to Moab, and had a year of living in on weekends out in CA wile doing some contract work there.  Of course I live in KS and not quite as far west as I would like but here we are.   I have always like the idea of a truck camper and FWC fit my needs list the best but was always the Cadillac '$' of my dreams, then I found this one.  In good shape but had a little damage to the front passenger roof line.  Previous owners were in the desert in CA and were lowering it during a high wind situation and it blew back up and bent up the framing a bit. 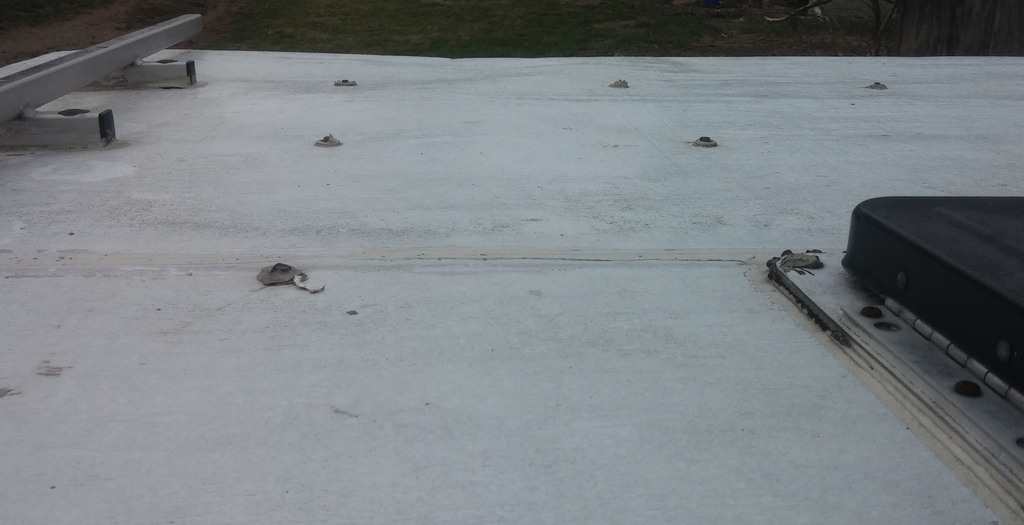 A few undulations in the roof 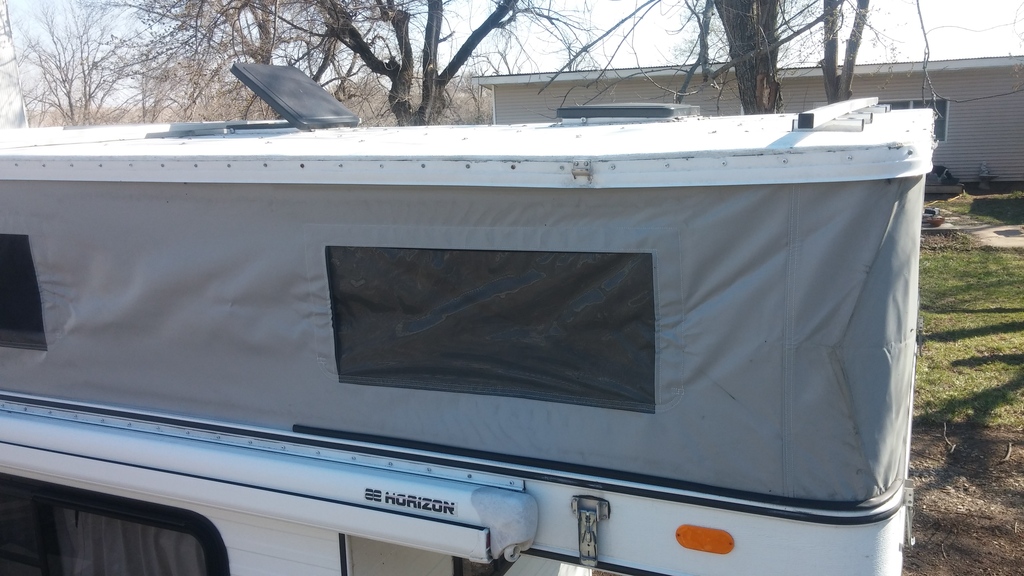 I was surprised when I looked at the top thinking that this one was new enough to have the one piece roof as mentioned on FWC site, I was not expecting to see all the screws holding the roof on and the seam.  ? what year did FWC start making the roof one piece ?  Too late for me to use that information in decision for purchase but others may wish to know.

I was told the roof did not leak and has been holding up well, I did notice a few loose screws on the roof, and decided that would be the first project to tackle. 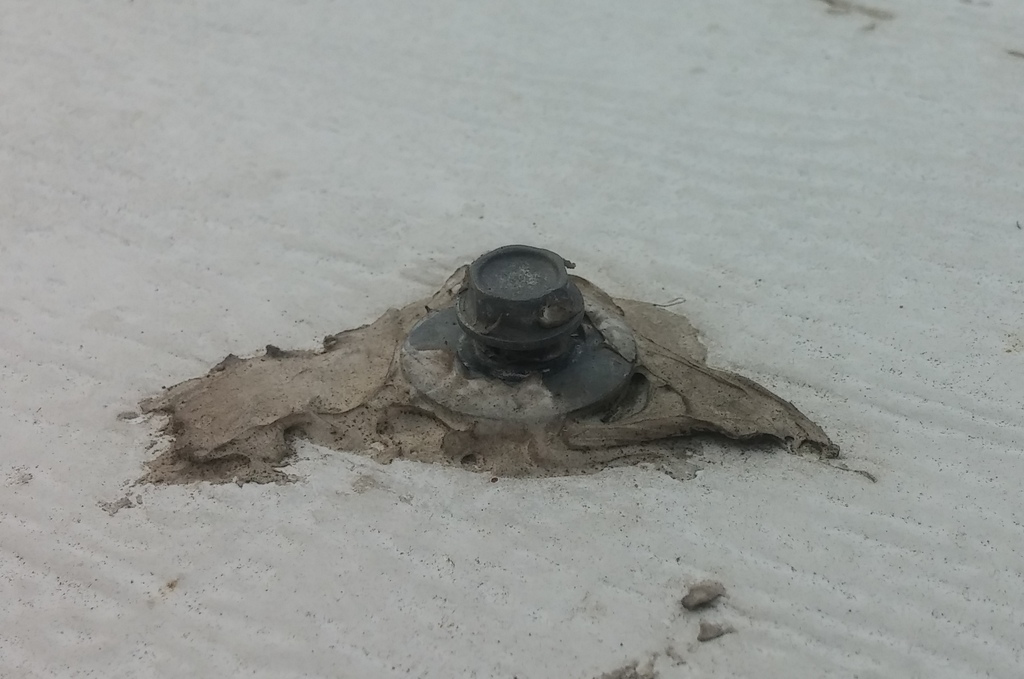 Of course I picked this up the first weekend as the kids were on spring break and we had already planned on going out to CO for a ski trip so the Hawk was unloaded as I needed my truck for use as a truck as we are cleaning up the old family farm and have many trips of junk to recycle.  So first was a base to sit on as I understand these have a floor with very little support to be used while off truck and on stands. 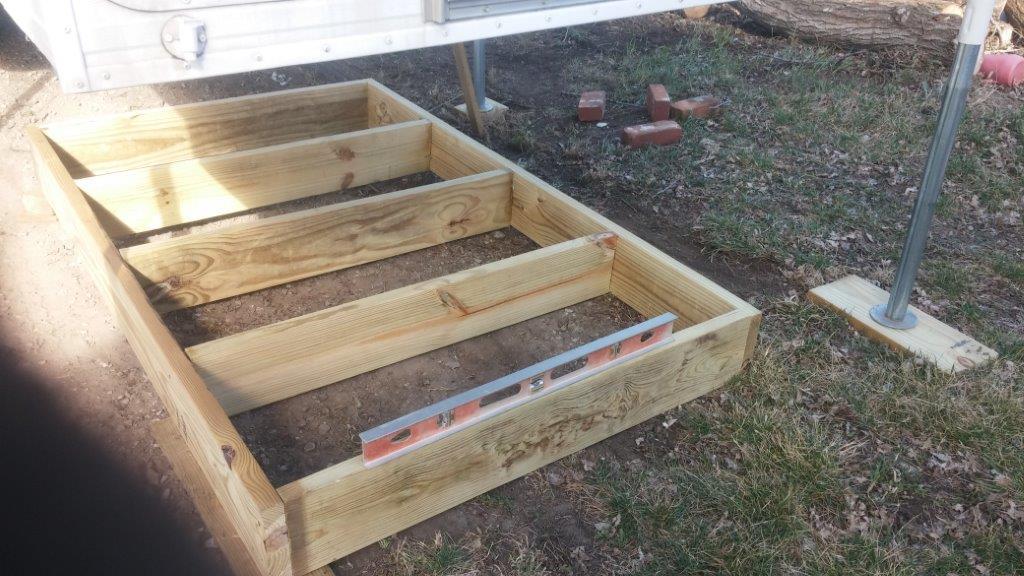 Started with some 2x8 for the base, I placed the riser platform that I had in the truck to give the extra 2.5" I needed to clear the bed rails on my F150.  I likely should have made it a little larger in the rear to accommodate the wider width of the camper by the rear door, but I will give it a go as everything sets well and firm as it is. 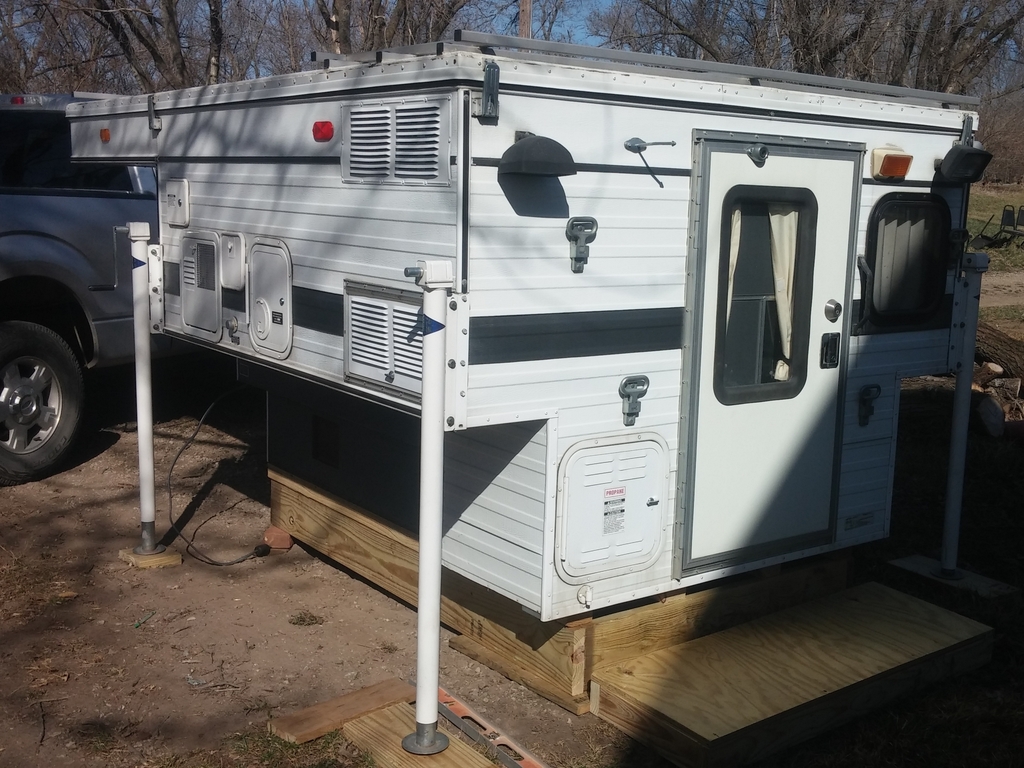 Done with it sitting on the platform, works well and made a bit of a porch for the door with the scrap 4x8 ply,  I used all treated lumber as I expect this to sit out till the concrete gets placed in one of the barns for a more protected storage location.  Once there I expect to go ahead and put some casters on the platform to allow moving it around as needed.

So while out in CO we had some rain and on inspection back home of the camper it was obvious that some water had gotten in and under the mattress.  Off to Lowes to get the needed items for repairs to the roof screws.  Typical supplies as others have used.

10x3/4 SS self taping screws, neoprene washers, 3M adhesive sealant 5200, (hard to find locally) ordered some protect all from the amazon to clean up the exterior. 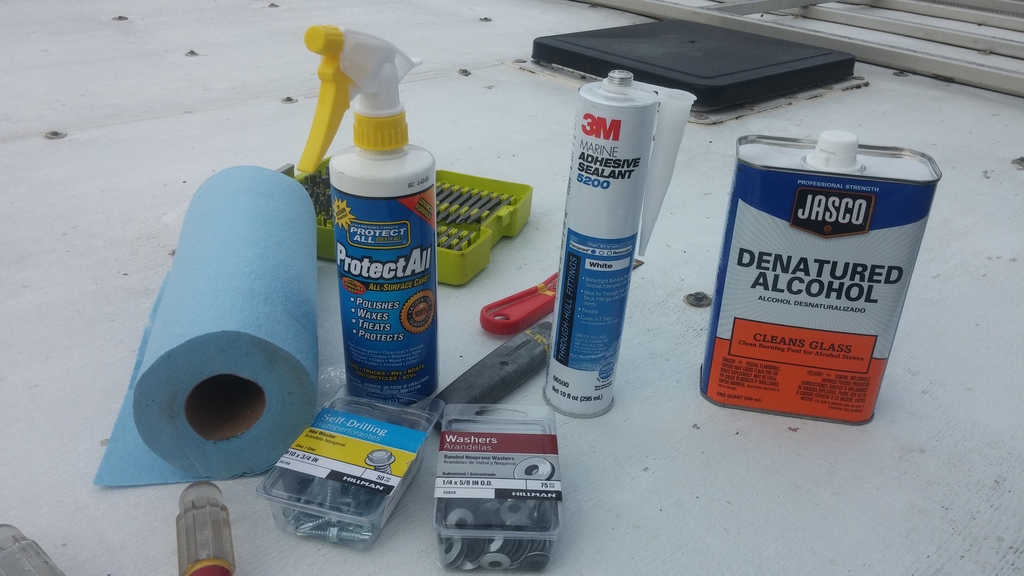 Now to work, once starting, lowered the top and checked everything, I noticed the front vent was not closed all the way, dang kids, mmm was that were the water was coming from?  I decided that I needed to replace the loose screws and go ahead with replacing all of them as history with this damage to the roof. 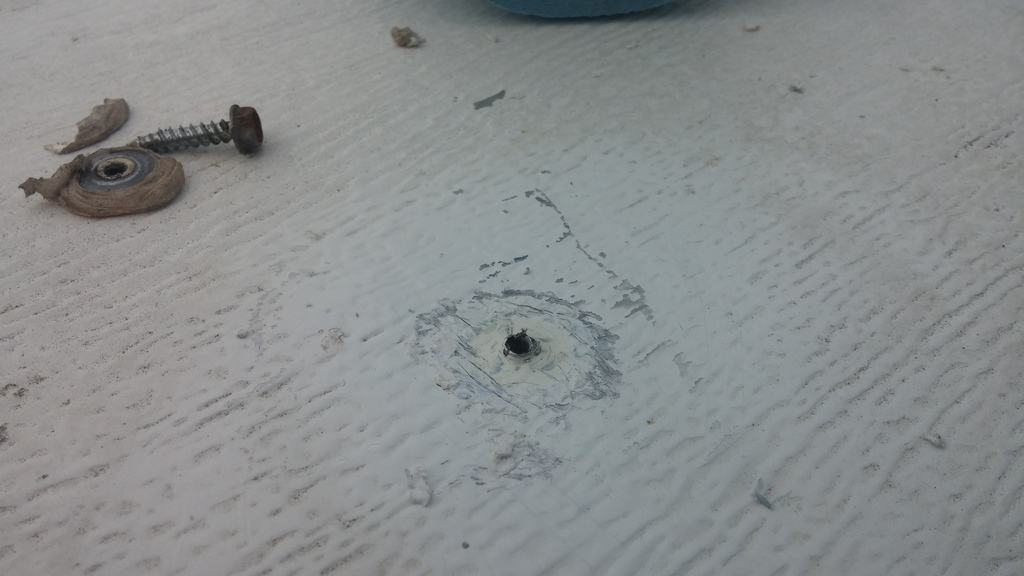 All of them cleaned up well and did not show  any sighs of leaking around them, old caulk was ahered well to the roof with no signs of leaking, no dust or water stains seen.  I did mash down the raised ring around the first few holes but then decided that it acted like a small dam to any water nearby and decided to leave it as I was replacing the screws with some a size larger. 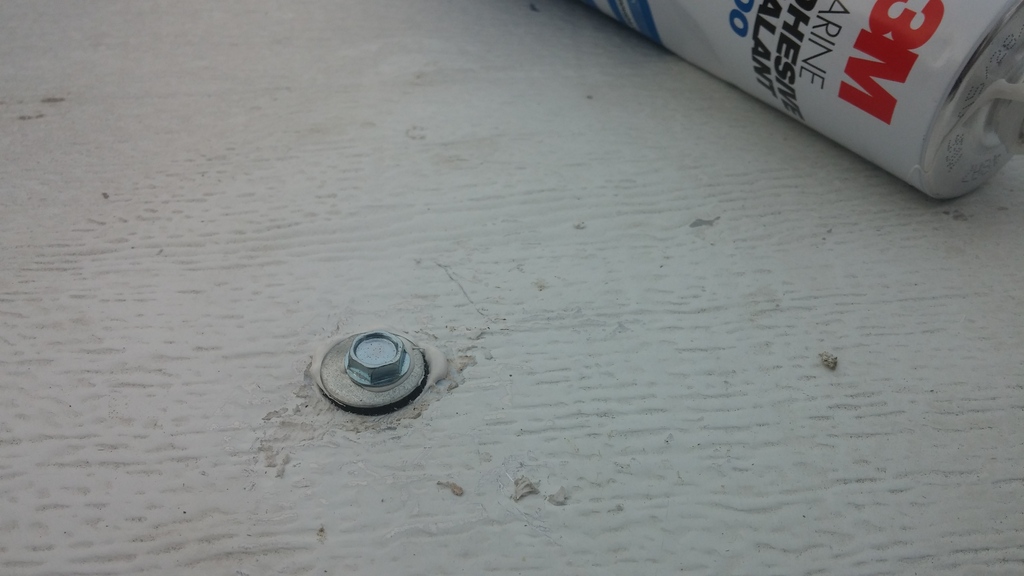 They all screwed down fairly tight, but I think you have to be careful there is a point were you can feel the screw stripping out the Aluminum frames below.   I was suprised that it felt like there was no plywood below the Almunium sheeting for the roof.  it appears to be directly screwed to the framing, I would have expected to have some sort of sheeting under the Aluminum roof, this makes me question the loading of things on the roof, and having to be strategic in placement on the loads up there especially if bouncing down a road some where.

I got about half of them replaced last night before dark, and of course it rained during the night, so I will have to inspect my job later.

I expect to replace the other screws including the rack and vents as it looks rather crusty around them. 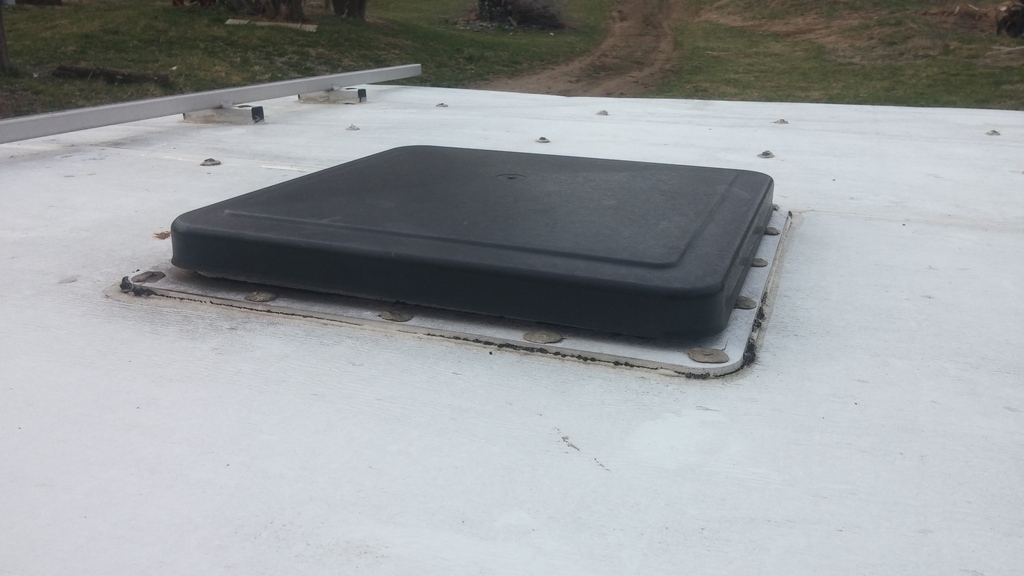 I don't know when they switched to a one piece roof, our 2010 Eagle has the screws like yours.  So far we've had no leaks (knock on wood).  The aluminum skin is attached directly to the aluminum framing.  In terms of roof loading you need to assure that the attachment for racks, solar panels, etc is to the frame members and not just to the thin skin.  Good luck with your new acquisition, I'm sure you'll enjoy it.

Also tagged with one or more of these keywords: Hawk, f150, repairs, base, roof