12 replies to this topic

Some pictures of the first production V-2 on the Expedition Portal XP thread.  A great looking camper! (Sigh, if only it were in my price range...)

The XP campers may be great, but from an aesthetics perspective, they just don't do it for me. I guess I'm stuck in the rut of tradition.

Thanks for pointing out those pics.  I really like the build.  I come from a boating background and I love design.  I guess I'll have to start saving a bit more.

Is it really the first one? We had a contract for the third unit ordered to be delivered at the end of 2013. When we canceled 9 months later, delivery was said to be November 2014. Good to have them finally in production, although seeing the final design I'm relieved it didn't work out. I like the looks and the design concept, but the Taco is seriously overloaded and the bed was unusable for us.

Was the bed too short?  It seems like it might be cramped for feet sleeping with the feet forward.  They'd have to increase the payload on the '16 taco for me to get really excited.  It seems like with the resin infusion method XP uses they should have a very light shell to start with.

I really like the V2 because there are no soft sides and you can look out the windows from inside without bending over. My wife is not a fan because you have to raise the top to gain access unlike our FWC. This comes in handy for things like lunch stops or changing as the day warms up.  But it takes a lot less to pop up the V2 than it does a FWC, so I could live with that. She also is against converting to a flatbed.

Even though I'm glad to see Marc has finally got them in production, we are not looking to purchase. I have heard, I think on ExPo, the next XP design after this is a slide in version of the V2 for full size trucks. That eliminates the required flatbed and can be used on 3/4 or 1 ton trucks, eliminating the possibility of overloading a vehicle. I would be interested in such a camper, if and when produced.

Was the bed too short?  It seems like it might be cramped for feet sleeping with the feet forward.  They'd have to increase the payload on the '16 taco for me to get really excited.  It seems like with the resin infusion method XP uses they should have a very light shell to start with.

The major problem is the low roof at the front where the top pivots. Because the bed is not wide enough for E-W sleeping unless you are quite short (plus the lift mechanism gets in the way), you have to sleep N-S. Ideally, with a N-S bed your head should be forward because otherwise it is awkward to get in and out; however, feet first is workable with practice and enough room to maneuver. Unfortunately, the front is not even high enough for feet, so you wind up with your head at bed's edge where the pillow falls off in the night. I'm a little over 6 feet and had to pile cushions on the narrow counter for a place to put my head! XPCamper was aware of this problem and I thought it would be fixed by adding height to the camper's nose, but I see no improvement in the production unit compared to the prototype. Other solutions such as a longer cabover or a slide-out bed extension were also rejected.

I notice that the dinette was made larger which was another one of our recommendations. In the prototype it was so short that the two of us could not share the foot space.

For what it is the shell probably weighs a little less than a comparable popup. However, the pickup box conversion to a flatbed does not save any weight, and this is designed as an expedition rig with a large refrigerator, large water tank and lots of storage. With two people, moderate gear (half the storage used), no water and 3/8 fuel tank--we had to stop often!--the prototype was over a ton beyond the Taco's GVWR, and the rear axle was 3/4-ton over the GAWR. I appreciate the Taco's toughness and that the prototype was somewhat heavier than the production unit, but the weight is more typical of a HD pickup.

Other details that did not work as well as we hoped included the flat bed which complicates fuel filling (the tube is lower than stock) and raises the floor height. Because of the high floor, the last step into the camper using the built-in steps is 16 inches which was a challenge for my wife. Another feature is the hard top and rear door that provide some security but at the cost of convenience. On trips we want to access the refrigerator or other items nearly every stop, and that's a bother to do when you have to raise and then lower the top--at least that gives you time to answer questions from curious onlookers! Also, we often bumped our heads on the raised door which ironically is touted as an advantage over popups.

All in all the V2 is a very cool design and well made, but I think it tries to be too much and does not get some of the details right. A few people will undoubtedly be happy with it... if they can stand the long and unpredictable lead time to get one. 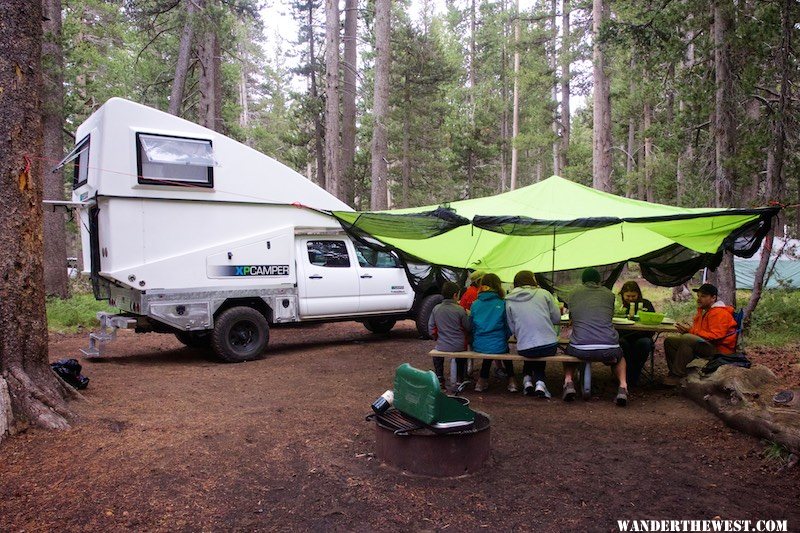 All in all the V2 is a very cool design and well made, but I think it tries to be too much and does not get some of the details right.

It is a bummer that the V2 did not work out for you. And I agree that some of the things you describe are a concern. But there is the old adage about never buying the first version of a product - no mater if it is a camper, car, operating system, or whatever. The V1 has evolved since the prototype. Heck, Four Wheel Camper continues to make changes 40 years on. The change in the dinette shows Marc is listening to his customers. At least he listened to you. I keep telling him to make propane appliances an option for people like me that will only be in north America. He refuses. But I digress. Even a number of the changes FWC has made are based on mods people on forums like this one were making.

So, yes, there are things that need improvement, but that never changes. What is key to me about the XP's in general is the quality of the shell compared to a frame with aluminum skin, the marine grade hardware, the wiring, the electronics, and the appliances (even if they are diesel) far exceed anything else out there unless you want to drop 300-400k for an Earthroamer, GEV, or similar. It is still out of my price range, and I would have to convince She Who Must Be Obeyed, but I still hope to own one some day.

I agree with Ted. I've been looking for the perfect truck camper for years and the XP is about as perfect as I can find.
I made a trip to XP to see Marc's workmanship up close and can tell you it's much better than anyone else in this category.
Of course the price point is different and it's very different than my FWC - which I also love. But XP offers me much more in a truck camper than anyone else can. Marc puts together a camper the way I would if I had his skills and time to do it.
I'm very excited about the V3. Marc is probably already tired of me asking about it - but the idea is fantastic and I've got the right truck for it - a 1 ton duramax short bed.
If it looks anything like the production V2's, I'm going to be a happy guy.

One can change the world, it only requires kindness

Thanks Bigfoot for a nice review.  Does anyone know if Marc lets customers choose to have less options?  What I mean is to build up the camper for weekending with occasional vacation instead of an "expedition" build.  For example use a smaller fridge, water tank, and batteries.  Does he let the customer finish off build outs themselves?  Does Marc offer a shell version?

Back to XPCamper Brand Discussions