28 replies to this topic

Thank you all very much for the insights on how you handle storage. I have been doing similar with back up onto an external hard drive. I want to build in redundancy with an additional external drive or two. After out evacuation here last fall, we concentrated on personal, irreplaceable items only. It was easy to grab a couple of small hard drives (personal data back up and photography). I'm also curious about off site storage and thus far Patrick's idea of back up kept in a safe deposit box - as long as you keep up the habit of monthly updates. Good ideas all and thanks again.

Now that lots of helpful answers have been supplied... I wanted to insert this technically on-topic -- but not very helpful -- item:

This little guy, which usually lives in my tablet/laptop hybrid, is the size of the tip of my little finger, and yet it has the capacity to hold all the content of 150 sets of Encyclopedia Britannica.

I just think that's SO cool! 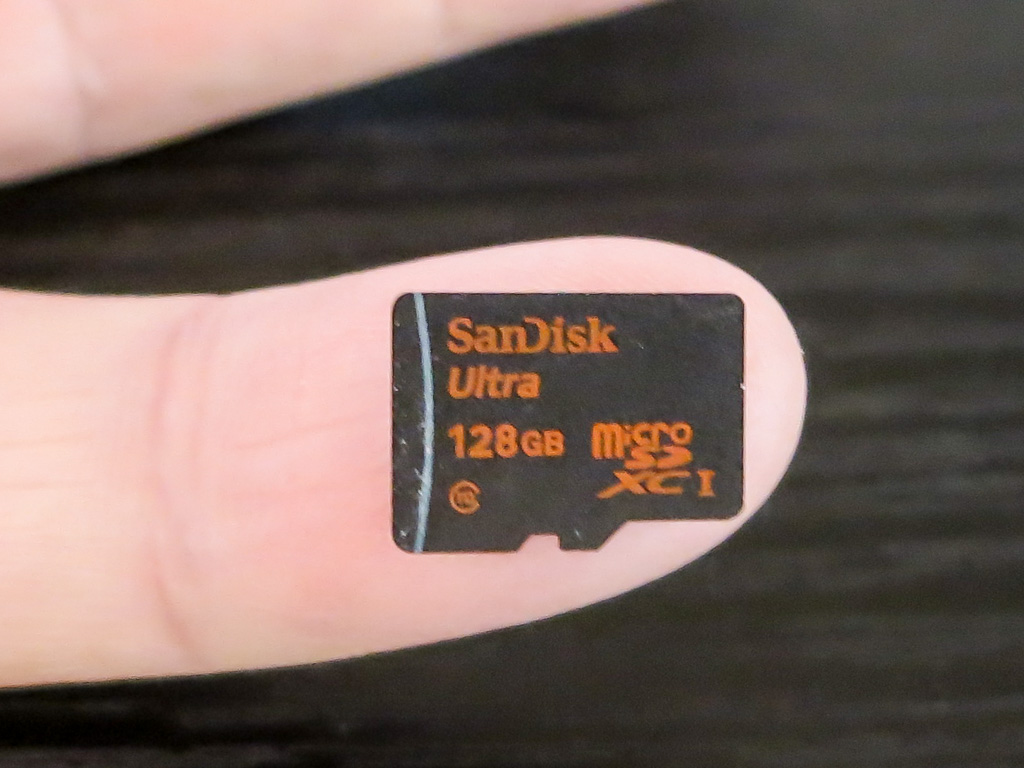 ("150 sets of E.B."?  My first electronic edition of the Encyclopedia Britannica, which included all the content of the print edition but not much more, came on one CD.  So that's less than a gigabyte.  Maybe 200+ could fit on the card.)

If you do full backups, keep two copies at home and rotate with a third that you keep off site.  If you use automated  incremental backups, better understand how your backup software determines what changes have occurred since the last backup as you rotate backup drives. That is, does the software update a changed file index on the computer's working drive as changes occur or scan and compute the changed files based on state of the files on the backup drive.

My concern on backups for photos that you might want to use in a decade or so is that they get rewritten periodically to refresh the magnetic records and copied to current storage technology so that they can be retrieved at a later date. For example, how many of us could read a Sony HI8 video today or read a backup file on an Iomega ZIP or JAZ disk, or a CD-Rewritable disk or even a compact flash card now that SD cards have largely superseded them?  Reading DVD-R and DVD+R are not universally compatible.  Technology doesn't remain still for long.  Choose wisely and keep your backups moving forward to current media.

Many good points made. The challenge for me is as much organizing backups as it is making them. I use database software to keep track of storage devices and their contents, but the increasing volume of image and video files is intimidating. Not to mention that there are often multiple versions involved. Storage is cheap but it takes precious time to sort through a pile of external hard drives (and CDs, DVDs, Zip drives and slides from past years). A backup does little good if I can't find what I'm looking for quickly and work with it in current apps.

As I get older there is the nagging question of what will happen to all these images when I am no longer around to care for them. No one will want to look at so many files even if they could. I think it is important to select the best images and either print them (one-off books are easy to make) or keep them as JPEG in long-term storage. There was a poignant seen in one of the recent Planet of the Apes movies where what they wanted most was to see an image of their child but it was locked away in a dead tablet.

Samsung makes all the chips in the set for faster and more reliable file transfer.

The SSD chip design is more durable than flash memory sticks and is capable of 1000 times more read/writes over the same spot on the chip.  Samsung's SSD chip quality is the same as commercial cloud/internet storage devices.

The SSD is more shock (drop) resistant than hard drives.

Wow, really fast.  A 20 gig (annual picture collection) copy engages the laptop's hard drive and does not let go sending files to the SSD at 10 times the speed of a flash memory stick.

If you handle raw picture files either an internal SSD drive or an external T1/T3 SSD will speed up file movements compared to a hard disk if you have USB 3.0 or 3.1 for the external choice.

The reviews said the discontinued T1 Samsung SSD I purchased works well on Windows which is why I choose the T1.

The reviews said to go with a current T3 SSD if you have an Apple computer while there are no reports of Windows problems with the T3 SSD.  The price difference between a discontinued T1 and a current T3 is minor.

Samsung SSD's are not cheap just FAST!!!  I spent so much time labeling and organizing pictures the price of the SSD was worthwhile.  Labeling 1000's of pictures without a good backup felt like a waste of time.

I plan to get another SSD next winter and have dual backups.  Currently we have full backup on SSD  and another on flash memory.

Interesting that no one is advocating cloud storage....

Interesting that no one is advocating cloud storage....

I shoot RAW +JPEG on my Nikons.  JPEGs get uploaded to a folder on smugmug.com, there is unlimited storage there so I break the things out by event or date within a backups folder.  I then also select the best and/or edited images and move them into a separate subject matter gallery so that someday (hopefully a LONG time in the future) someone can go through and review and figure out which if any they want to save for future generations.  Yeah, I pay for it but it works for me.

RAW stay on a couple of NAS drives.

I tried Google cloud for free but the file upload speed was much slower than going to my T1 and T3 Samsung SSD's (I did buy a second SSD, one in the safe deposit box).  Obviously, upload speed would depend on your internet service.  Also, Google cloud tried to sync my files, cloud versus disc, which slowed down my computer.  I take 6,000 pictures in a single trip which gets cut down to 3,000 after sorting and labeling.  Google cloud sync'ing lasted less than one day and was cured by deleting all the cloud files rather than spend the time figuring out how to turn off sync.

iowahike I agree that cloud storage is not for everyone.  I can take 30,000 images in a single trip and can you imagine how many days or months to upload to the cloud that would take?

Wow, 30,000 images. That would be an enormous task to go through them. Are they all worth keeping? I've decided my pictures are not that great, might as well shrink them to 800x600 and delete 90% of them.

Back to Camera, Lenses and Gear