59 replies to this topic

Back at it the following day, I added the alternator connection through a 30 amp auto-reset breaker.

I slid the camper in, attached the turnbuckles and plugged it in. No sparks, daylight over cab now

I spent the rest of the day loading and packing for the first trip, which happened to be the FWC rally at Sugarloaf, about 25 miles from my home in Sonoma County. I was just a bit excited and checked in a day early to grab a suitable "Solar" spot for myself and NorCalHusky.

Stan got a shot of us though:

The Sugarloaf Rally was great fun, and a great trial of everything in the camper and truck. Being local, I set up Thursday night and had invited some friends out for dinner and a bit of guitar strumming. The Robert Ferguson Observatory had a public viewing night on Saturday, another friend of mine is a docent and had his telescope set up. My wife and I did mange to get a nice hike in, we actually hike there often. I was once a docent for the park and have worked on many of the trails there. It was a lot of fun meeting other FWC owners, listening to the various talks and viewing other campers and mods. Sort of a "Wander The West - Live From Sonoma". We had warm sunshine, cool nights, cold mornings (Well, for California

and a significant rainfall one night. No Leaks! My wife enjoyed the furnace in the morning, which worked great. The awning proved quite difficult to deploy, I guess it wasn't used a lot. I set it up at too flat an angle, only to awaken after the rain to discover it holding many gallons of water. I couldn't believe it didn't break. And, the pictorial directions weren't real clear on how to stuff it all back in place, but eventually it all fell together and was stuffed back into the case.

Sunday afternoon I headed out from the park, waving at a few new friends, and thinking about the trip ahead. Three weeks on the road, only three days to get ready!

Three days to prepare, and there were a couple of things to fix & finish.

I had attempted to flush the water system before the Sugarloaf rally, but the drain petcock broke off in my hand when I went to drain the system. I used some pliers to open it, still nothing. Then, I remembered the PO telling me about a second drain valve inside. After opening it, a dribble started, but nothing substatial. While further fiddling with my pliers, a waterfall began from the opposite side of the camper! I quickly shut the inside valve, and then pulled the petcock. As my brother the plumber used to tell me, if you put a water pipe in wood a carpenter will find it with a nail. Or, a screw in this case. Don't know when this happened, but I couldn't back the screw out because the head was under the plywood spacers on the bottom of the floor pack. It even appears to have been backed out and re-inserted at a different angle. I used a dremel tool to grind the offending pointy tip off, then just dangled a new hose out as I didn't have a new petcock at the time. 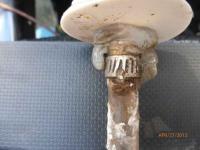 I couldn't get the water heater to fire beyond the pilot, so I decided to clean it. The "Carburetor" was disassembled and orifice cleaned using a welding tip cleaner. I thought about changing the anode rod, but with an uncertain service history ( Well, I was certain it had never been touched) I decided to wait until after our trip to do that. Didn't want a hole in the heater where the anode used to be - yeah, I've changed them in our household water heater before, they can be quite difficult to remove the first time. I've since removed and replaced the anode with a new magnesium rod, no water heaters were destroyed in that project. 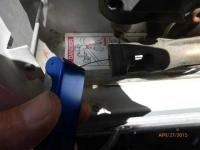 I had previously begun to downsize the shore power from 30 to 15 amps. This involved removal of the heavy, attached 30 amp power cord that was stored in a big tangled mess in the cabinet next to the fridge. I changed the main breaker from 30 to 15 amps (big box hardware store item), and rewired it using 14/2/G romex contained inside ENT conduit. I used the original external housing, but milled the inside to accept a standard junction box in which a recessed plug was installed. While in the cabinet, I removed the various wasp nests that had accumulated from access through the cord hole. They can't get in now! 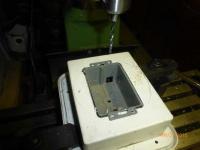 My wife made a gear holder, an idea we saw on tour at Sugarloaf. It sticks to the arctic pack velcro while parked, I move it down to the front "Settee" while travelling. The velcro also sticks to the carpet on the settee, haven't had it come loose yet. 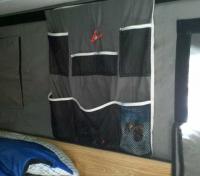 Nice mods. It still boggles me they use a 30 amp service. My only thought is it takes care of the handful of people who'll plug in an AC.

I like the gear holder. We've been talking about such a mod but haven't gotten around to it yet. Now we can copy yours!

Time to start updating, it's been a while.

I started this thread off picking up a Hawk with my '77 F250, then replaced that with a new SuperDuty. Well, The registration came due on the '77, and it was time for the biennial California smog inspection. Of course, that same inspection is required to transfer a vehicle, so it was time to sell it and get the proverbial two birds with one stone. With one less old truck around, my wife got a bit happier also. Me, not so much, after all, my Dad bought this truck in 1979! 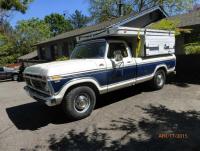 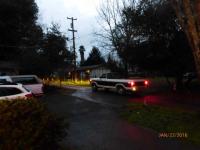 Long May You Run!

Wuck, I know the feeling. Watching my old F250 drive away was painful. It gets better with time... sob!

Over the winter, we've been thinking about a dinette. We stopped in at FWC to check out the various options, and to dangle shiny new campers in front of my wife. She was very impressed, but not quite enough to jump into a new camper, so back to the drawing board.

We've pretty much decided on side dinette, currently we don't have a roll over couch or any real seating. I went out to measure a few things, and found . . .

Quite a bit of water. On the floor, soaking the right side cabinet, the carpeting, ugh. In December and January we had about 20" of rain here in Sonoma county. Yes! We really needed it! But, it seems like all of it was in my camper. We spent three weeks last Spring in Utah, and got quite a bit of rain, and a couple of very hard rainstorms all without leaks, so this was a surprise to me.

Over the next few days, I mopped up and inspected, then mopped up again, and again. The roof and liner were not wet, so no issue there. We were leaving town over New Years, it was still raining, so I tarped it and drilled a hole in the floor to drain the mess. 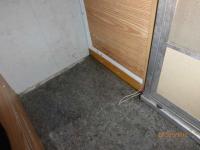 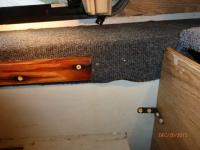 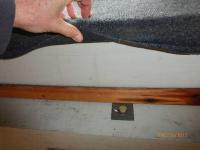 Notice that white paint along the edge of the panels - this isn't a new issue, a previous owner had a problem here.

On return, I found the right rear corner, from the window back, to be a source. The carpet lining the bench was siphoning water away from the base of the wall and dumping it on the floor. After pulling the carpet back, the floor remained dry (still raining . . .), but the bench was puddling now. Next I pulled the side window, the inside trim, and the inside panel. The panel was very wet inside! I put some new weatherstrip around the window and re-installed it, and watched the bench puddle again as the rain continued. Slower this time, but still leaking. I did the same to the rear window, still raining, still leaking. It seemed as though everything I did slowed the puddle, but didn't fix it. I decided the wall had to come apart to re-seal everything. 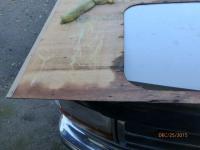 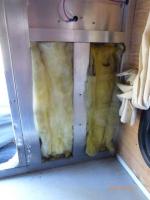 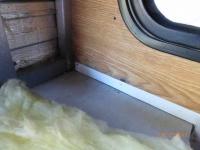 Wow, quite the project wuck! Good job with patience and getting it fixed up right as you work on your remodel.

Adding my congrats.  Looks like its in good condition.

Front fridge is a nice idea as you can pull out and leave out the bed  and still have full kitchen counter to work on.

Edit - finally read the whole post. Stiking out the good condition part. Glad I bought a new one as I don't have your excellent rebuild skills.

Also tagged with one or more of these keywords: FWC, Hawk, mods