11 replies to this topic

Just a quick question from a new photographer.   What would be a good tripod to purchase, but not too expensive.  One to get started with, so to speak.

The two photographers that I value most in terms of accurate advice are Thom Hogan and Moose Peterson. Tom has an excellent essay on tripods that really rang home with me. Basically, it breaks down to spend now or spend later. I started out with less expensive tripods and heads (Manfrotto and others) then found that I wanted something that was lighter and more versatile. I eventually ended up with two keepers, both carbon fiber. One is a Really Right Stuff (RRS) and the other is a Gitzo. The RRS is my goto tripod for 95% of what I do.

Here's a Youtube video from Moose on the RRS TVC 33, plus a Youtube from Joe Johnson, the owner of RRS. I use the RRS TVC 34L, a tall tripod that can support up to 50 pounds, plus a smaller Gitzo. I recommend getting the best tripod you can afford, and the tallest, and with out a center column. With a tall tripod, you can position the camera so that you can shoot star scenes, or wildlife in trees, plus you will have enough tripod to work side hill locations. The reason I say no center column is to allow the tripod to lay flat for work that is low to the ground. RRS and Gitzo both make tripods where the center plate is removable so you can change it out with things like leveling plates, or a plate with a center column if you really want that extra height. I prefer the RRS design over the Gitzo because it has three locking screws that hold that center plate in position. Gitzo just used (Not sure if that is still the case) a friction collet that held the center plate in position. Lots of expensive gear has hit the ground when being carried over the shoulder, and the center plate slipped out.

There are a number of other good tripods out there, but the above mentioned are my personal favorites.

You will need a good ballhead for your photography, and there are a number of them out there. Regardless of which one you choose, I strongly recommend that you get one that has a Swiss Arca style locking clamp. You can then use your camera with an Arca plate, and it will fit any of the Swiss Arca style ball heads. My preference is for RRS and Kirk ballheads, with Acratech following close behind. I use the RRS BH 55 with the screw in type clamp, they also make a locking lever style clamp. When you think about mounting plates that attach to your camera, consider a 'L' plate. That allows you to switch from landscape to portrait orientation without moving the ball head. If you think you're going to get into wildlife photography, you might want to look at a gimbal style head. There are several good ones, with Wimberley being the standard bearer.

So, I've just spent a lot of money for you. If you want to get good gear at a lower price, I suggest watching the local Craigslist ads in the photography section. It might take a while, but it does show up. You can also go for good quality aluminum (are you young and strong) tripods like the Manfrotos, and do just fine. They are just heavier, and usually not as versatile. I do recommend that you go to a Swiss Arca style ballhead though. Acratech is the most affordable.

I hope that helps.

Steve, thank you for your timely reply.  No, I am not what you would call a young man.  Turn 71 Thursday, but in great health.

Adrian, I see carbon fiber in your photo kit ;-)

I picked up a cheapo off ebay. Does what I want. Never even considered that I can't do portrait pics with it.

I'm more than happy with my Manfrotto tripod.  It's heavy.  I also have a Manfrotto monopod.  It makes for a nice walking stick, it's relatively light for how strong it is.  It's nice to keep the weight of the DSLR off the neck while hiking.

There is sooooooooo much used quality camera equipment out there.  There is no reason to have to purchase "cheap" equipment.

Also what size camera and lens are you using?

In what environment will you be using the tripod ie. studio, hiking etc.

I often just extend one leg on my tripod and use it like a monopod.  It makes for quality shots and also helps with the weight of the camera and tripod.  It makes it easier to navigate through crowds/obstacles.

You may want to consider a monopod with legs and get the best of both worlds. 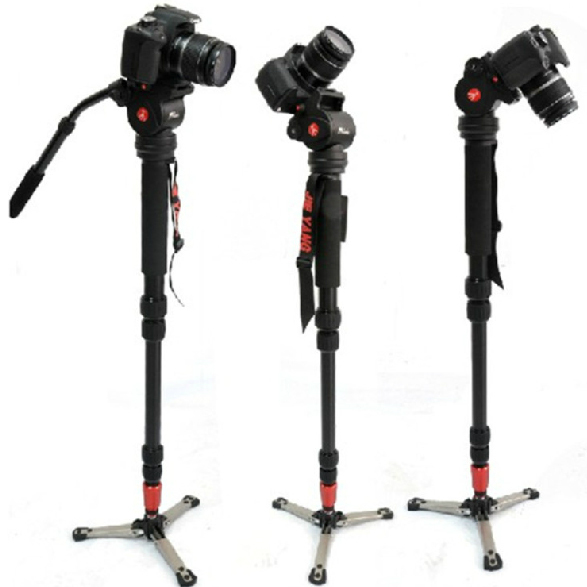 Just a quick question from a new photographer.   What would be a good tripod to purchase, but not too expensive.  One to get started with, so to speak.

The best tripod, if any, depends on the kind of images you favor and your type of camera. Landscapes, birding, macro, travel, panoramas and video have different needs that no single tripod/head will excel at. Big cameras need a more hefty tripod/head than smaller systems. However, the in-camera stabilization of some modern cameras is so good you may not even need a tripod unless you are doing time exposures or some special setup.

Cheap tripods are generally not worth it, and expensive tripods--even made of carbon fiber--are heavy, bulky and get in the way. Of all the photography supports I have collected, the one I use most often is ironically a flexible Gorillapod for mounting a remote camera or flash in odd places. For a beginner interested in general photography I suggest looking for a used tripod (or new on sale) that is as small as you think you will need and the best quality you can afford. Note that a good head is just as important as a sturdy tripod and it may cost nearly as much.

Tripods are a must.
I still use my 30yr old velbon tripod but mainly for gopro and pns cameras. The SLR goes on the manfrotto. Do your homework about what might be right for you. Definitely keep an eye out for deals on used gear.

Founder of D.E.R.P. Desert Exploration & Research Project. A camp proper is a nomads biding place. He may occupy it for a season or only for a single night, according as the site and its surroundings please or do not please the wanderers whim- Horace Kephart.

I'm on board with what Steve said at the beginning of this thread.  I started out Manfrotto, but eventually bought CF Gitzo.  I owned the RRS BH55, but downsized to the BH-40 which is fine for mid-size DSLR with 70-200mm or even 400mm lens.   I don't use a gimbal.

I also use a Gitzo monopod with RRS lever clamp which I find slows me down a bit to compose more carefully than handheld shots.

I had a Manfrotto aluminum 'pod, which was a beast, but it was too heavy to use as a hiking stick.

Acratech is more affordable, as can be Markins for ballheads.  I have purchased most of this gear used from FredMiranda Buy/Sell forum.  The key is to buy from established sellers with plenty of feedback.  I've had no problems this way.

Either RRS or arca-swiss L plates are a must for all my camera bodies.  One side benefit, I learned from Patrick, our traveling WTW member, is to use a RRS mini-clamp to hang my camera off a strap like Black Rapid.

Any kind of support is important as it can be a tripod, beanbag or any hard surface.  You are in for disappointment handholding unless you use proper technique and or a fast shutter speed for sharpness.  Motion blur will kill a image!

Use what you have or buy what you need or can afford new or used.  Not everybody with a camera needs the best stuff nor can they afford it.  I can get some of my best images by using a tripod.  It slows you down and forces you to compose better compositions.

Comments above are great suggestions for considering tripods and heads.  What do you want to get out of your images and what is your budget?  We started out cheap and later read Tom Hogan's article on tripods also.  We now have 7 tripods between us and with a "L" bracket on the cameras we can grab any tripod that works for where we are going.

Back to Camera, Lenses and Gear