33 replies to this topic

A question for you flatbed owners.

How exactly is your flatbed integrated to the mounting of the FWC? I am in the process of having a custom flatbed made. The flatbed fabricator is working off of drawings provided by FWC. I am assuming that I want the bed drilled and tapped to accept a bolt down from the FWC. From talking to my FWC dealer he seems to think that a bolt and separate nut under the flatbed is needed. To me that seems ridiculous as you will need two people to tighten each bolt and nut. It seems so much simpler to just put threads in the flatbed. The mounting points are being specifically reinforced for the application, so there will be plenty of aluminum there.

How are your flatbeds designed? Would you do it the same way given the opportunity to do it over again?

Thanks in advance for your input.

My two cents for what it is worth:  I would not want to remove the camper from the flat bed several times a year.  It seems to me a difficult endeavor if you just have a camper and not the extra stuff I have installed.  Lining up 4 holes while supporting a camper on 4 jack stands will not be easy.  Hell, I struggled placing my former slide in camper exactly where I wanted it in the pickup bed before I built the flat bed.  There were no holes to line up there just get it centered in the bed!  In my current flat bed situation it would not be practical at all since I have also (in addition to four bolts) drilled through the floor of the camper for a grey water drain, second fresh water tank plumbing line and diesel heater fuel line, combustion air and exhaust lines.  All of those would have to be removed in addition to the camper.

As for your question about threaded flat bed for the bolts, that is going to present several challenges too.  I do like Rando's suggestion of rivet nuts that are placed inside the camper during the install if you must but I suspect they may not hold properly due to the nature of the material on the floor of the camper.  I am attaching a bunch of photos below that may help you with your decision.  The photo (from the production floor) of the propane box exhaust vent is telling as to floor composition.

I chose to install 1" aluminum plate welded inside the frame as the drawings suggest.  The install guys were not happy about that because they were restricted as to the location of the plumbing cabinet bolt and even had to move the fresh water fill line in order to get the bolt in there.  They cussed more than once about "engineers" leaking drawings and restricting them during the install.

This first photo is from FWC and it shows the suggested reinforcement plate locations in the frame of your flat bed.  This diagram was still valid in May but things may have changed since then so best to confirm with folks at FWC.  The most challenging bolt location will be the left front of the camper as this bolt is located inside of the plumbing cabinet.  There is not a lot of room inside of that cabinet and I am attaching several photos for you to see.  If you end up placing bolt pilot holes inside the bed and they change the location of a pipe or electrical line then you will be left with going to "Plan B".  In addition, there are no jigs used on the production floor so things don't always end up in the exact same location when they do the build.  Of course, options such as hot water, outdoor or indoor shower, toilet all add to the crowded plumbing cabinet.  I guess it is easier to say that the install guys need some flexibility!  That's why they engineers drew up the plans with such a large reinforcement plate! 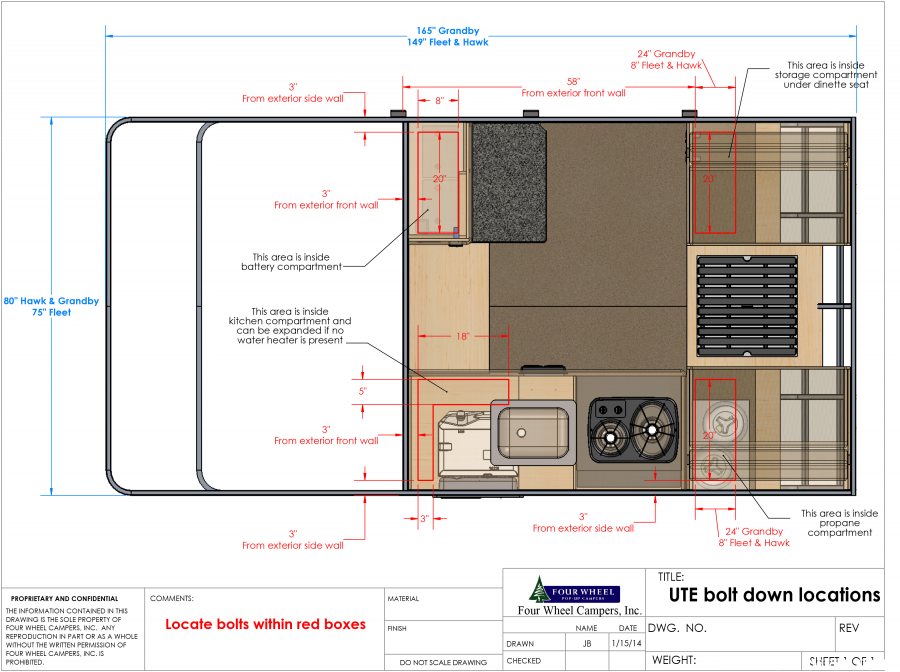 Because of my build and components in the bed, we ended up only placing one of the reinforcements (of two called for in plumbing cabinet) inside the frame.  It is critical to make sure the builder knows where the bolt down locations are so that you don't end up drilling into a frame member. 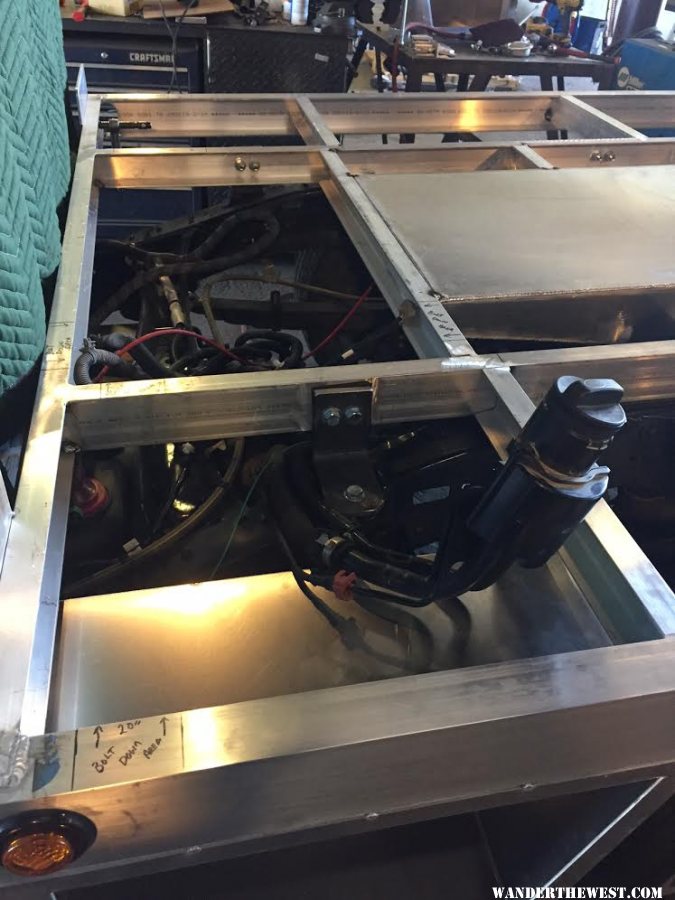 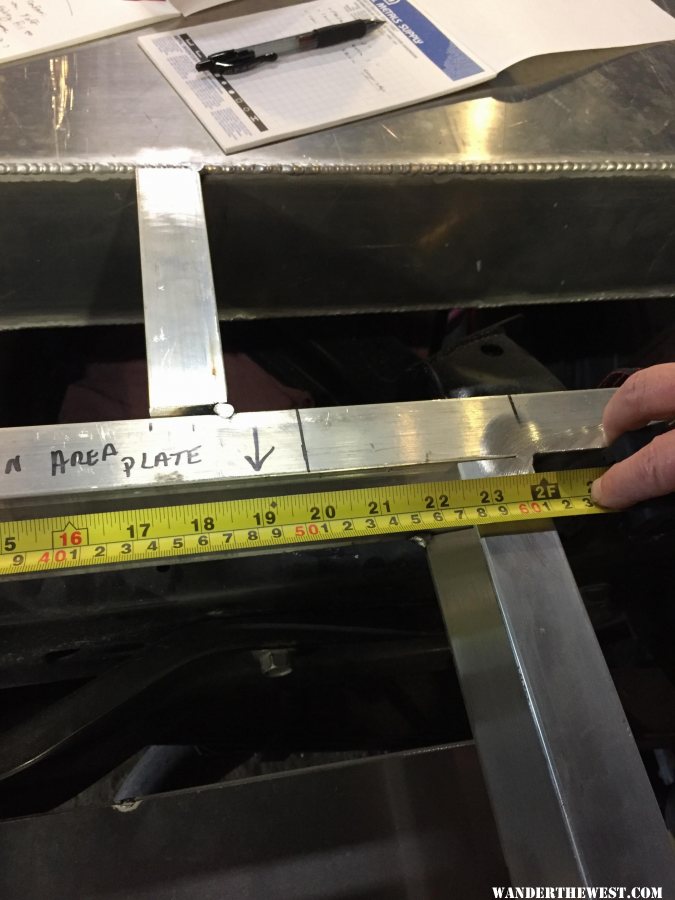 Right Front (under propane tank) mounting plate after bed has been sprayed and before deck attached.  BTW, we screwed the bed down to the frame so that I could have access to any component that would require replacement and may not be accessible from below.  Because of the thick 1" reinforcement plates, we were able to use 1/4 aluminum for the deck which saved a significant amount on weight! 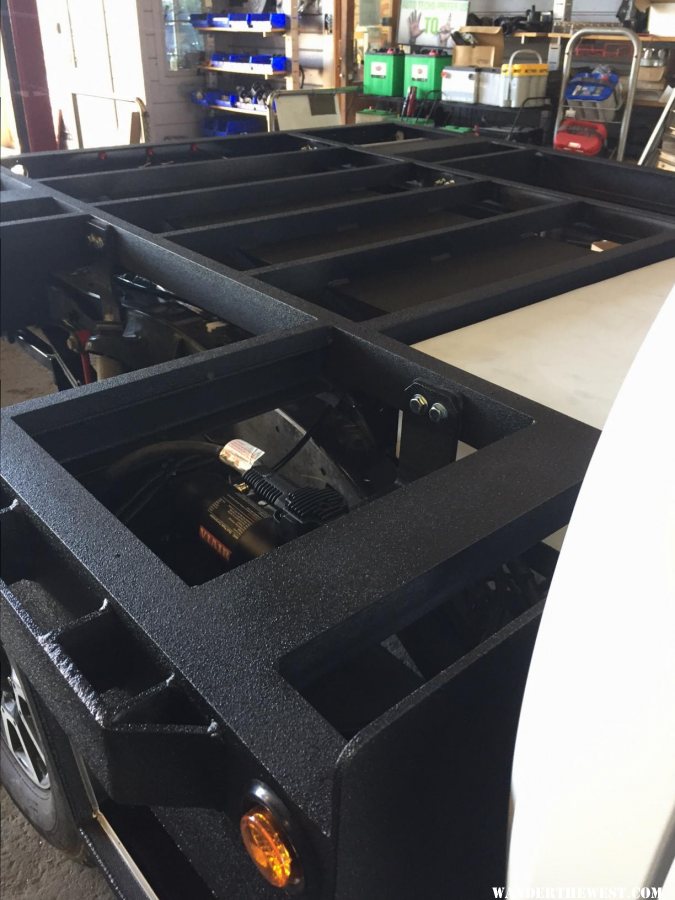 I'm not convinced this material would support a riv nut and hold the camper down! 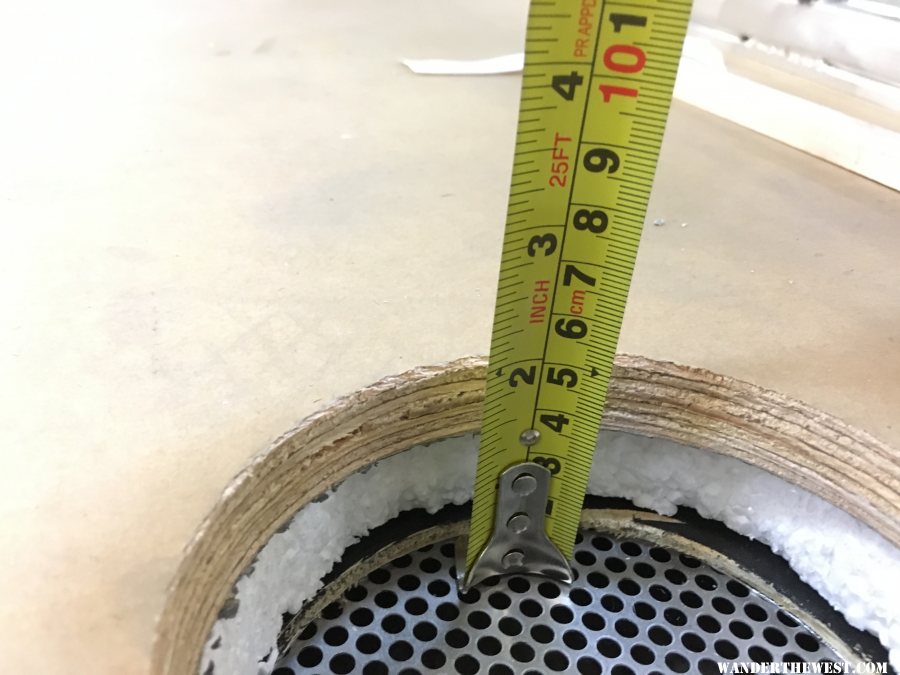 The following photos show the plumbing cabinet.  They start with a shot from the production floor and then others to illustrate how truly small this cabinet space really is.  I eliminated the reinforcement plate in front of the hot water heater because of the extra fresh water tank (seen in photo above before deck attached).  I restricted the bolt location to just the front side of the water heater and further complicated it by limiting that space with my drain line and water line coming from under the bed.  The FWC guys rose to the occasion however and "got-er-done". 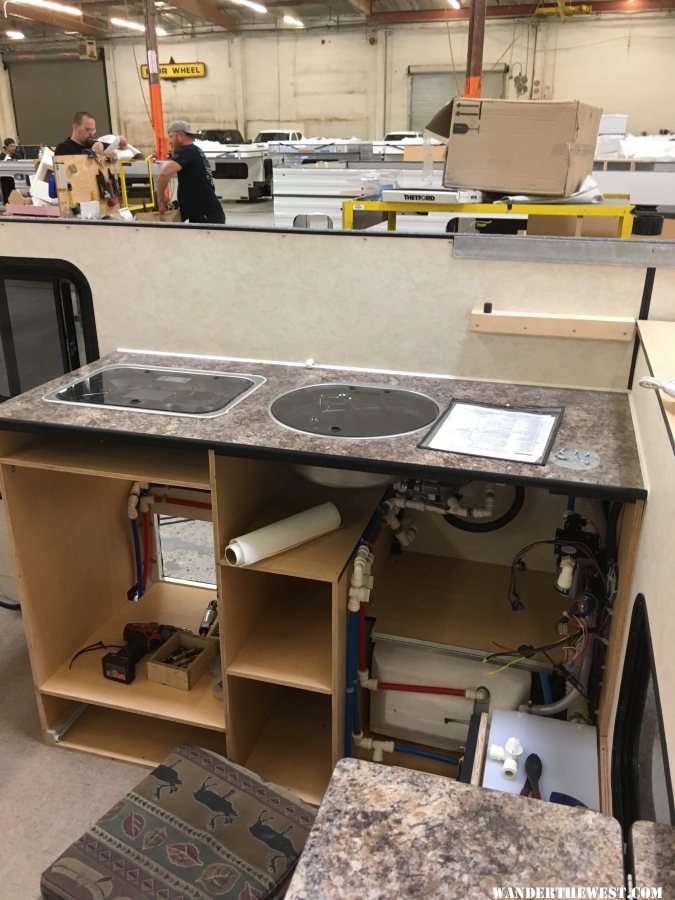 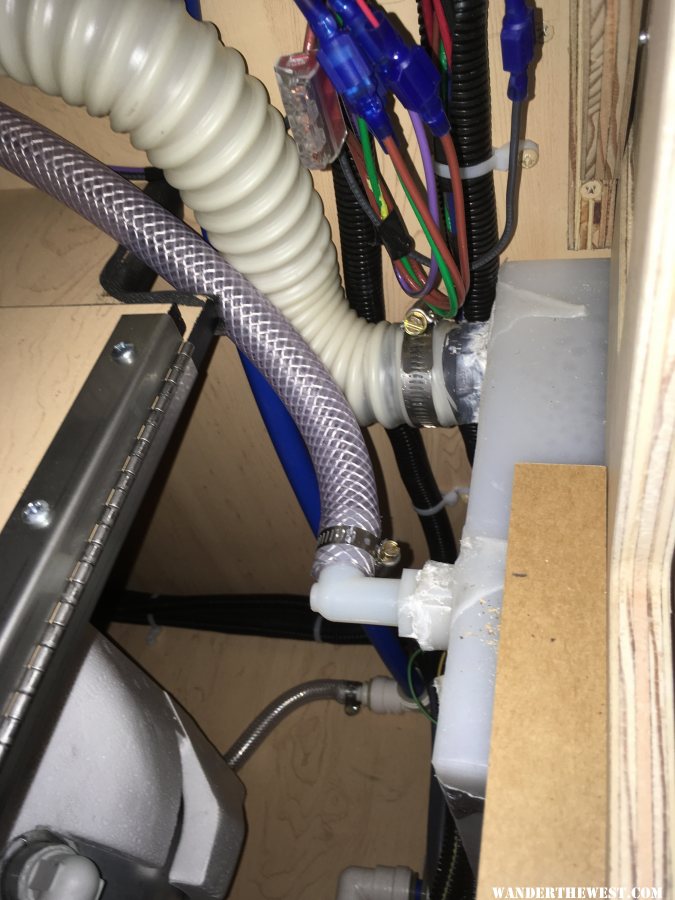 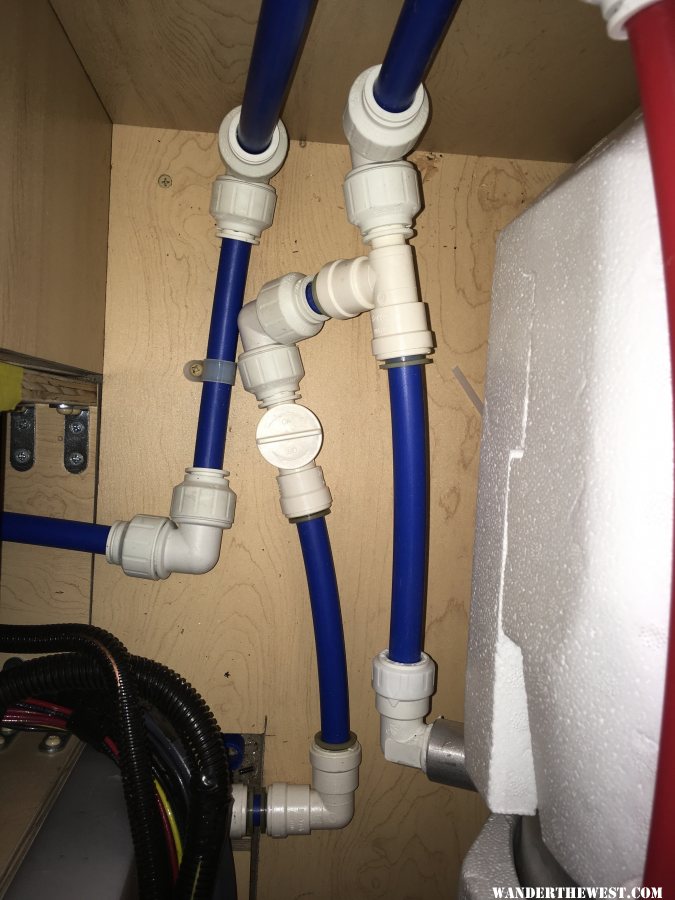 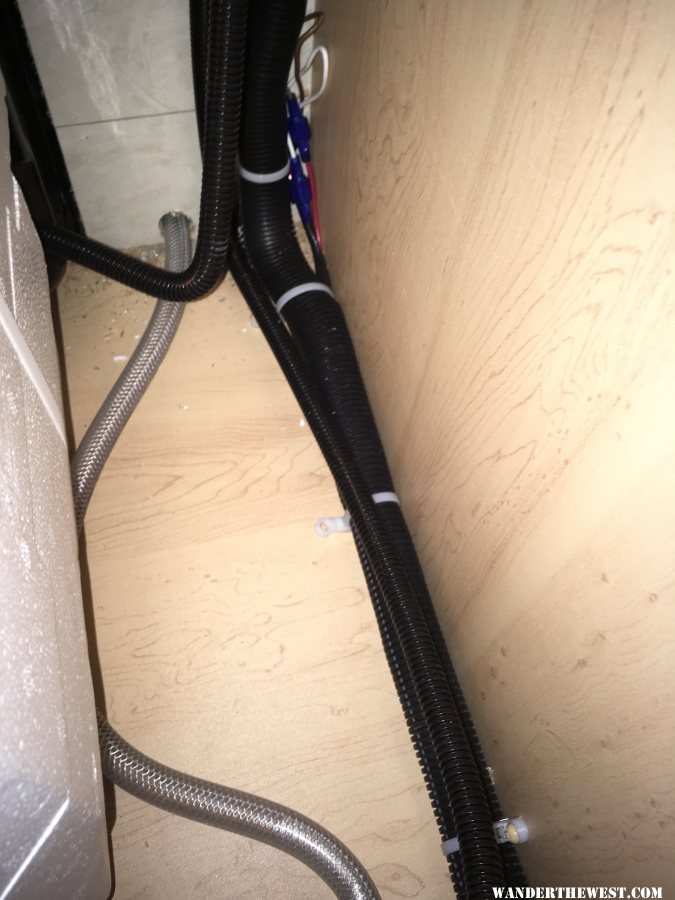 Not a lot of room in here! 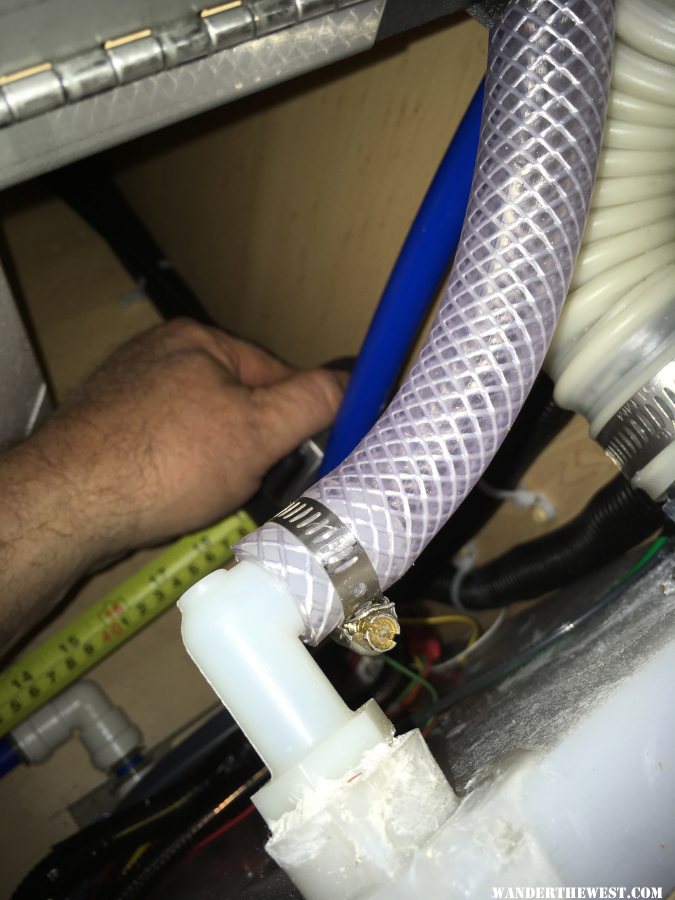 Here's a shot of the finished job with additional plumbing lines drilled through camper and bolt in place. 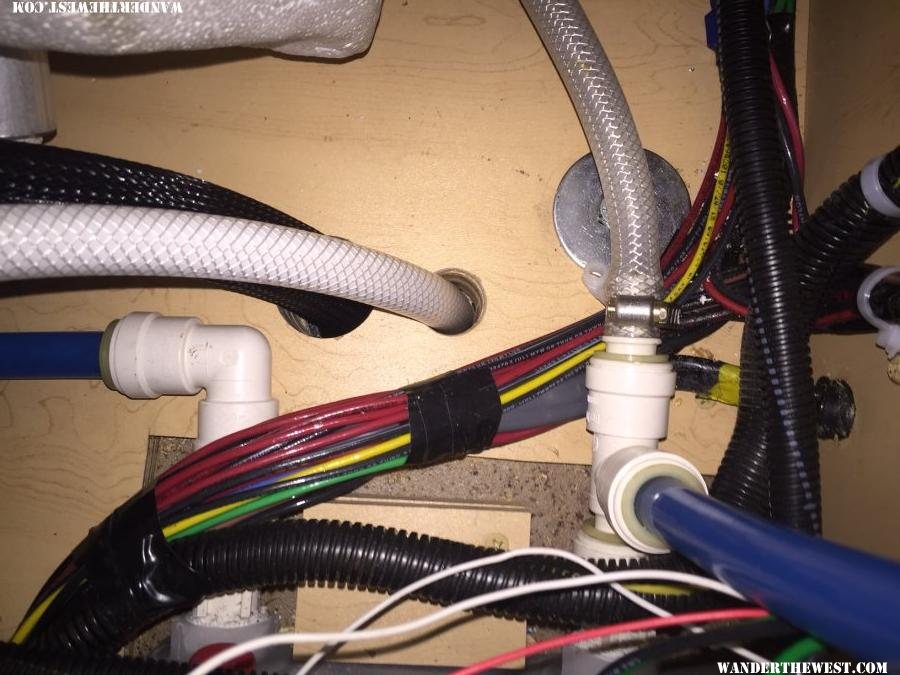 This is truly an exciting time for you!  I hope my experience helps you somewhat in your decision process.

But in general I would agree with CamperCamper that lining up 4 holes to 4 holes to reinstall the camper is going to be really, really difficult to do.  You are either going to have to climb into the camper or crawl under the truck with the camper on jacks to see the relative alignment.   I still thinking putting studs on either the bed or camper would be easier so you can just guide the studs into the holes - but I still think it will be a challenging task.   I would like to make some minor adjustments to my setup, but the thought of removing and reinstalling the camper has given me pause.

Taking off and reinstalling my flatbed Hawk would be a nightmare with six holes with bolts and plated to all line up.

I love the FWC flatbed models (just ordered a new Grandby!) but I would encourage anyone that installs a flatbed model to stop thinking of their vehicle as a 'truck" and more of a "go-anywhere RV"! Because that is what it has become!

CamperCamper, thanks a ton for the photos and the spec drawing. Your build thread has been most helpful to me too. Cheers

Also tagged with one or more of these keywords: FWC Flatbed, Flat Bed