91 replies to this topic

HA! HA! I got a kick out of that. I hope Sherri doesn't read this because I don't want to become bear bait.

We always wonder about hotels too, and question what really gets cleaned or replaced? We sort of made the mistake on this trip of trying to cover way too much territory each day. Sometimes it just got too late to find a camp site, or we were real tired after driving all day. On the next trip we won't try to cover half the country in a month.

Our next goal was to visit the Petrified Forest the Painted Desert. We traveled north on AZ Hwy 180 to the south entrance of the Petrified Forest. This was mid-day on a Friday and we wanted to be in Santa Barbara by Saturday evening. So we had to sort of breeze through both parks. Beautiful parks and the weather was almost perfect. 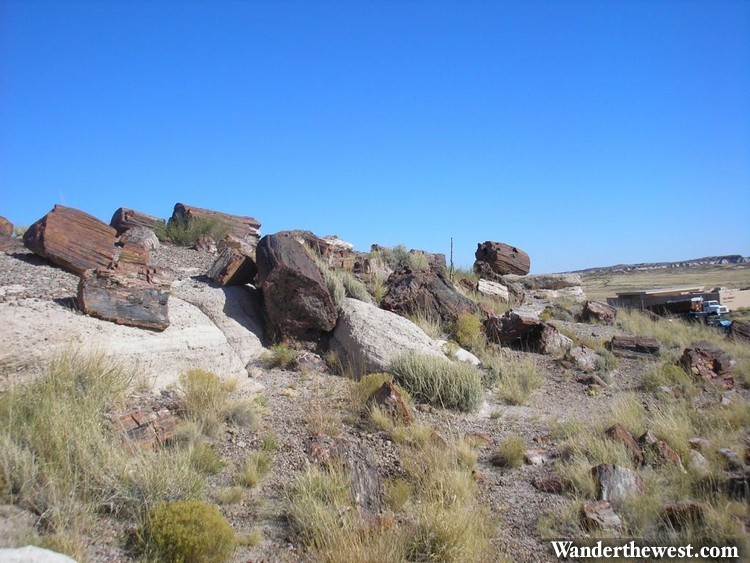 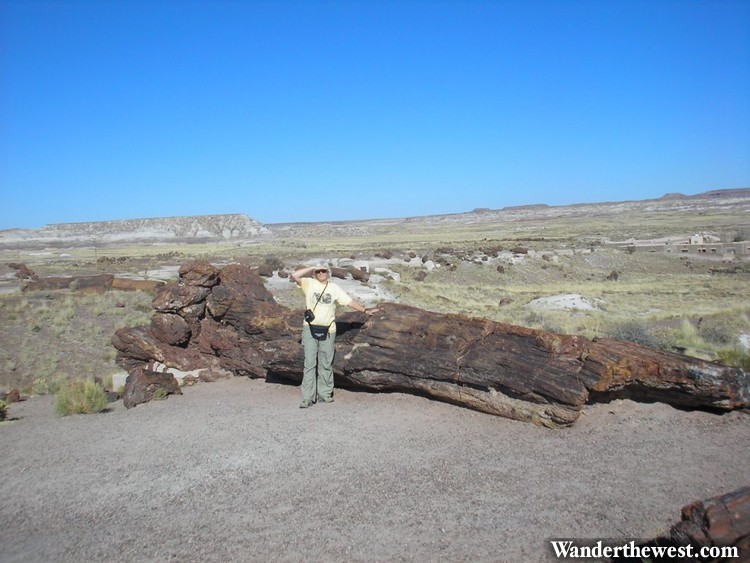 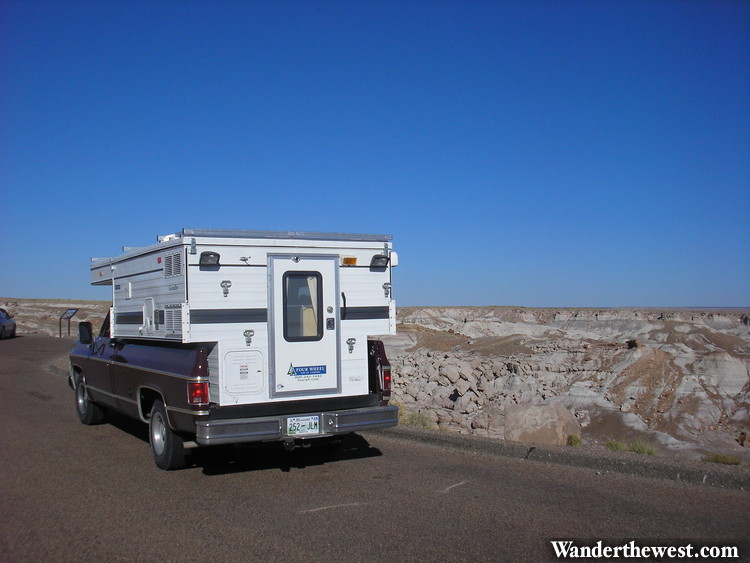 Logs roll down the hills once the softer strata is eroded. 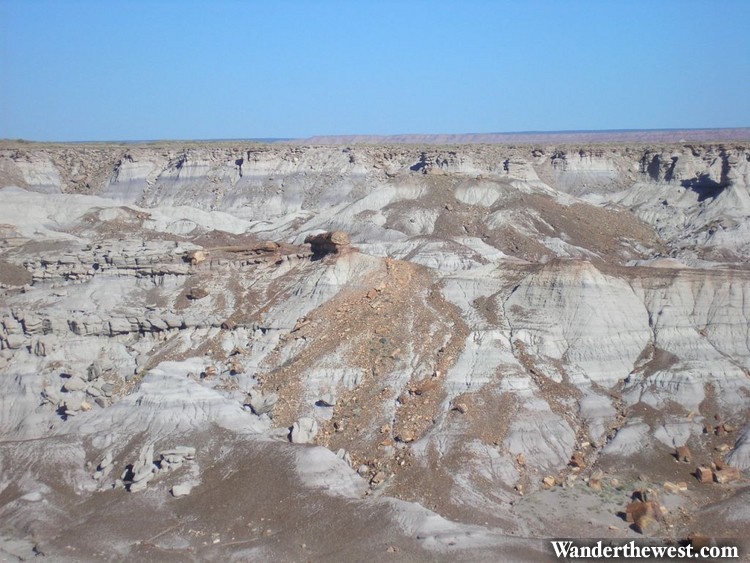 Sherri sitting in front of Painted Desert. She really likes that yellow T-shirt. Seems like she has been wearing for about three days now. 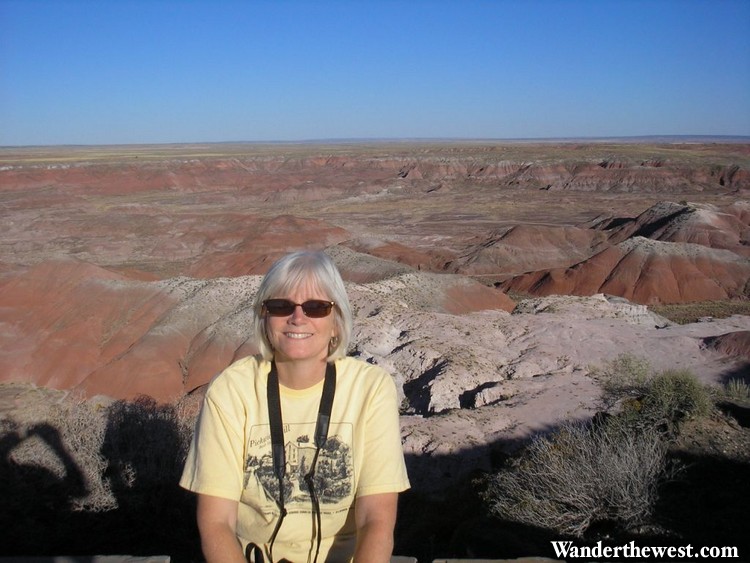 Another of the Painted Desert 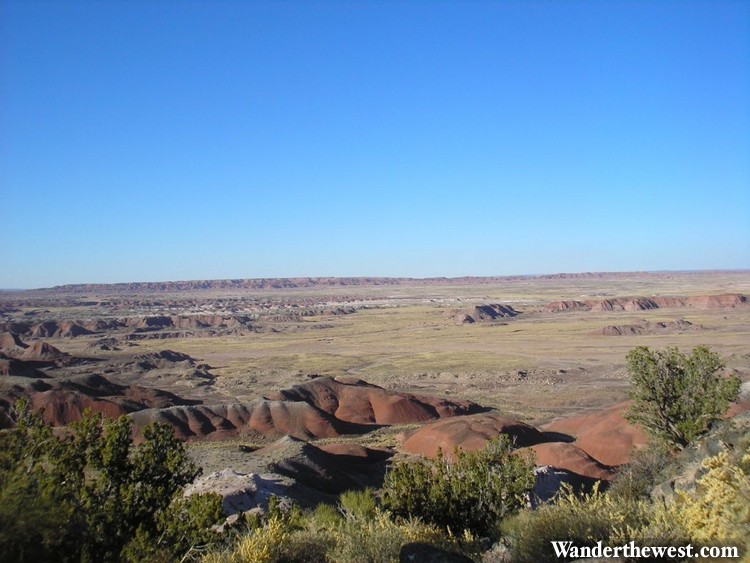 After visiting these two NP's, we had to make a dash for the west coast. We headed for Flagstaff to spend the night.

If you become interested in traveling the west, the distances are a challange. Most of the people on this site camp relatively close to home and this enables them to take more time, which is good in itself. In contrast, with a camper on my truck I have pulled out of San Diego on a Saturday morning and pulled into Hunstville, Alabama on Sunday night. Your drive from Petrified Forest to Santa Barbara in a day reminds me of some of our runs. It really helps to have a low profile popup camper to make those long drives.

FWC and ATC are the only campers I know of that allow this kind of long distance driving with almost the same ease as driving a sedan, mainly because a half ton pickup drives like a car. In addition, our style campers makes long trips more comfortable because people can sleep in the back while under way. Some people do not like the idea of sleeping in the camper while driving, but it is legal and we do it.

Your remarks about making your way to a camp site late at night certainly strikes a chord. Through the years we have become expert at that. It takes experience to find a remote NF campground in the dark or locate a safe boondock at Midnight. Basicly, we keep driving until we find a good site. It is uncomfortable to compromise on safety in choosing a camp site.

Because you are long distance campers, take this suggestion to the bank. Flying J has separate free parking for RVs away from over-the-road trucks. They have showers, food, and supplies. The showers are clean. If you spend a hundred bucks with Flying J within the month on things other than gas, they give a nice discount on the gas.

Our next stop was in Santa Barbara, actually Goleta, CA to visit Sherri's brother. Up until this time, highway traffic has not been an issue. From Barstow down to I-210, 134, and 101 to Santa Barbara things got a little busy. I didn't think traffic would be too heavy on a Saturday afternoon, but I was wrong. However, it's very beautiful in the Santa Barbara area and along the coast. I can understand why people like to live here. There was just a hint of wild fire smoke when we were visiting. The fires got worse after we left. I hope the fires are not getting to any of our WTW friends who live in the vicinity.

Those of you who live in southern CA will probably be bored with these pictures. As I write this from TN on Nov 15, winter is setting in, it's cold, and wet, and sort of colorless compared to these southern California pictures.

At least the traffic was moving 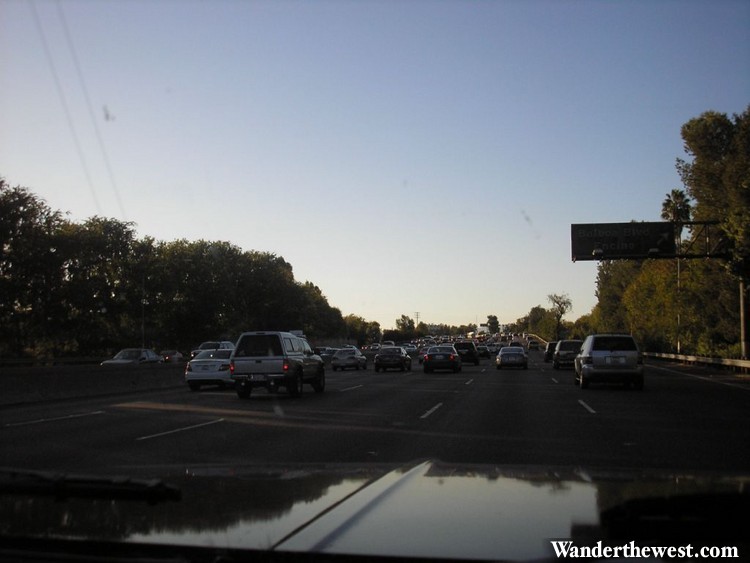 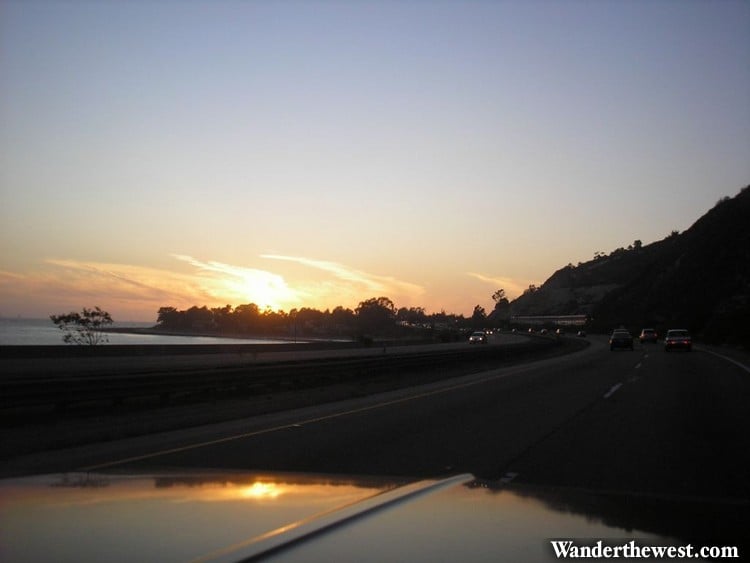 The next day we took a tour of the Santa Barbara area. 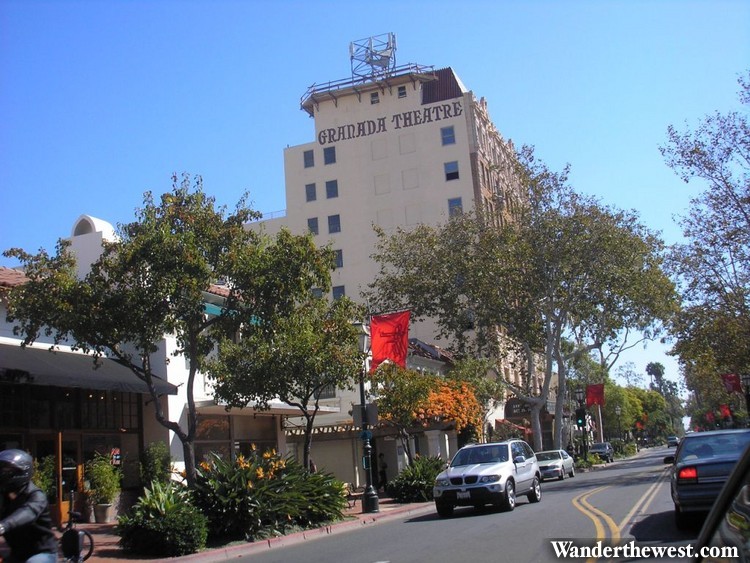 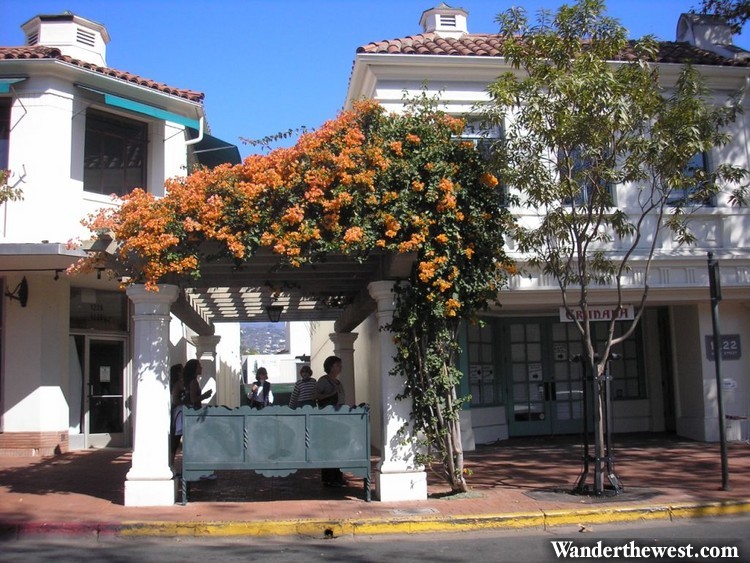 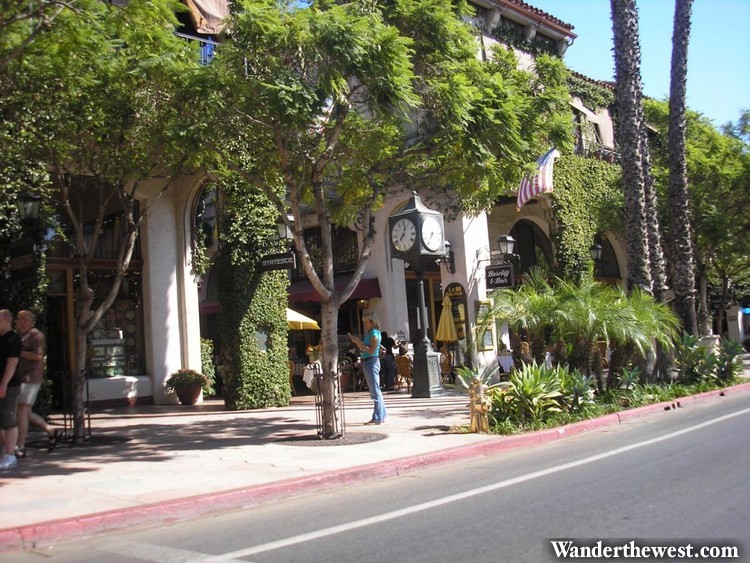 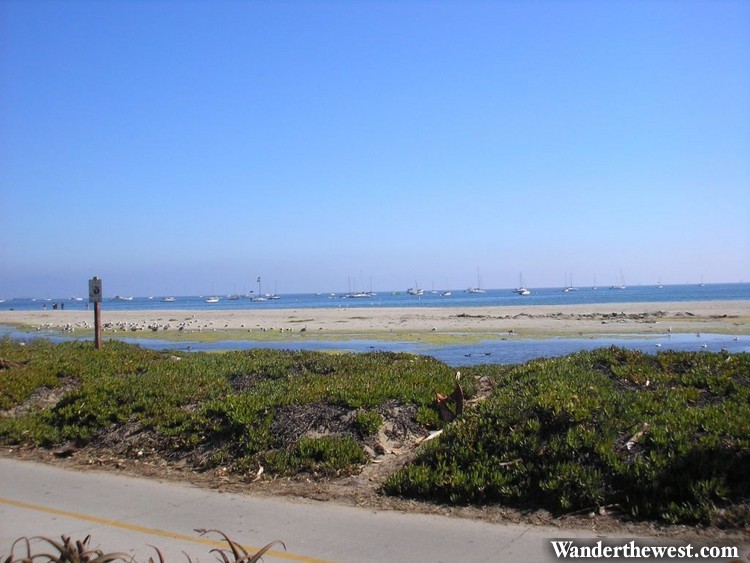 Near Stearns Wharf we saw some other types of campers. 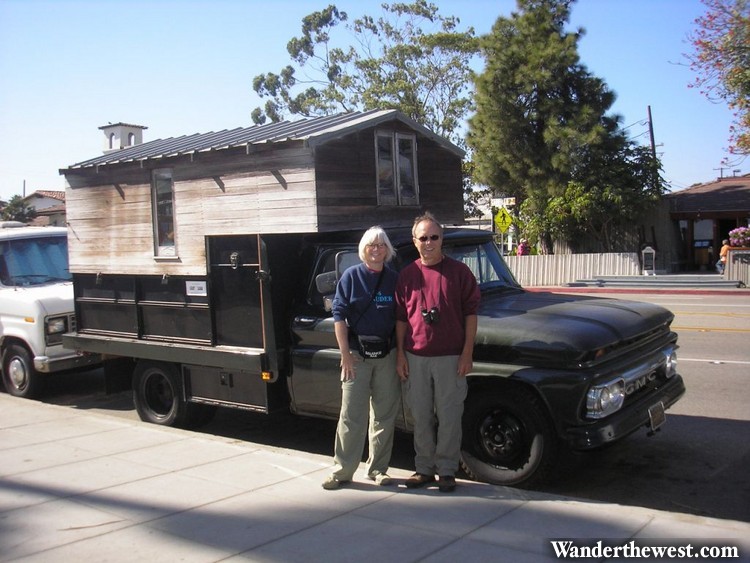 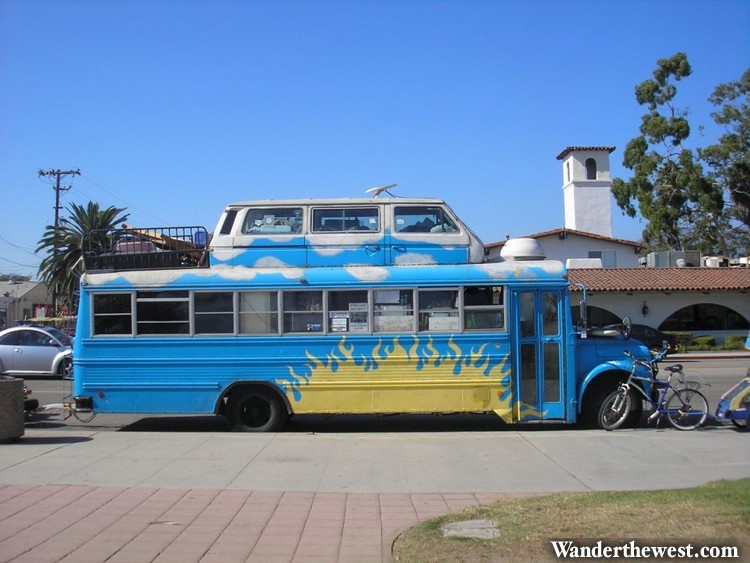 Some views from Stearns wharf 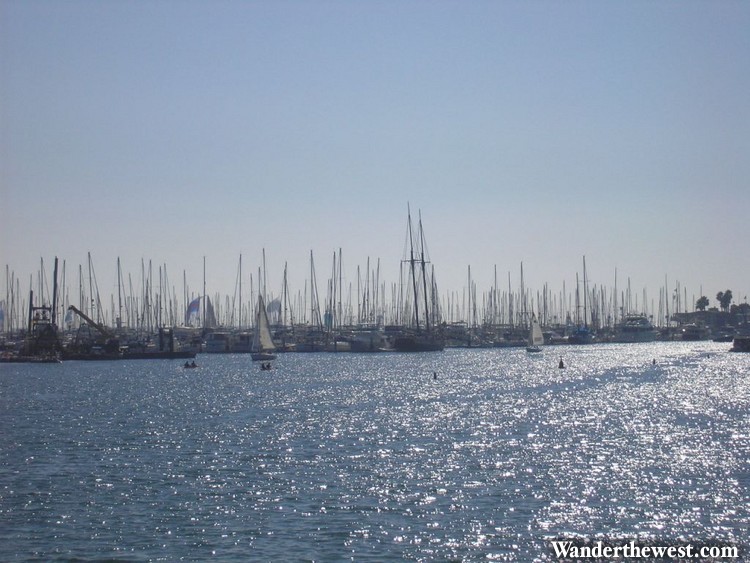 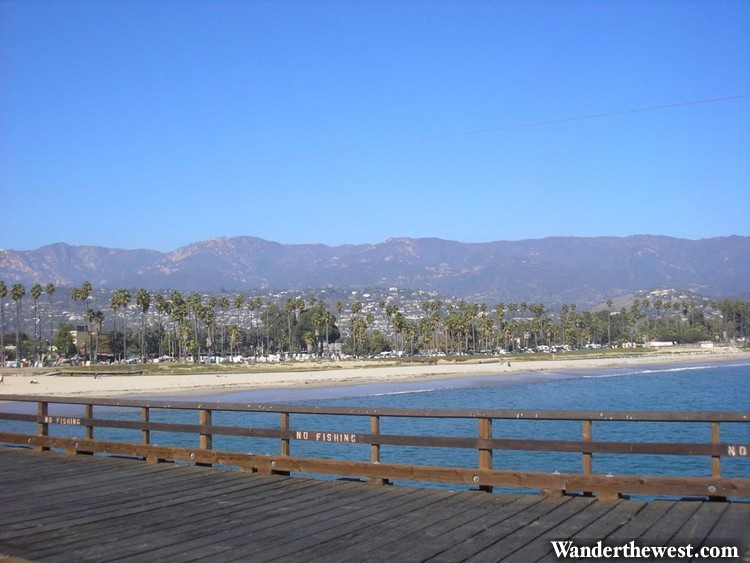 Great report Buzz.....an action packed trip with many off the beaten path visits...

Yes you nailed it on the timing in So Cal..Things are a mess here now..I personally am un affected other than a little smoke..major losses for many:( .....lots of hero's

Ran across and took this shot this morning looking south towards Malibu and the LA basin...

While in Goleta CA, I changed out the heater core in my truck. One advantage of an old truck, if any, is that it's easy to work on. The job took me about 2 hours. We departed for Sequoia NP early on Tuesday morning, Oct 21. En route, we stopped in Santa Paula for breakfast at the El Pescador restaurant. We both had a great, authentic Mexican breakfast. We couldn't eat it all, and as we started doing more and more on this trip, we got a to-go box and put the leftovers in the FWC frig for later. I really like that FWC frig/freezer option.

We stopped at Camping World in Bakersfield, mainly just to take a break and just look around. I decided to fill up the FWC propane tank there. It took only 2 gallons to fill it! Amazing since we have been on the road for 11 days, and using propane every day for heat, cooking, and sometimes for the refrigerator.

We stopped for lunch at in Visalia at a great little place, IN-N-OUT Burger. 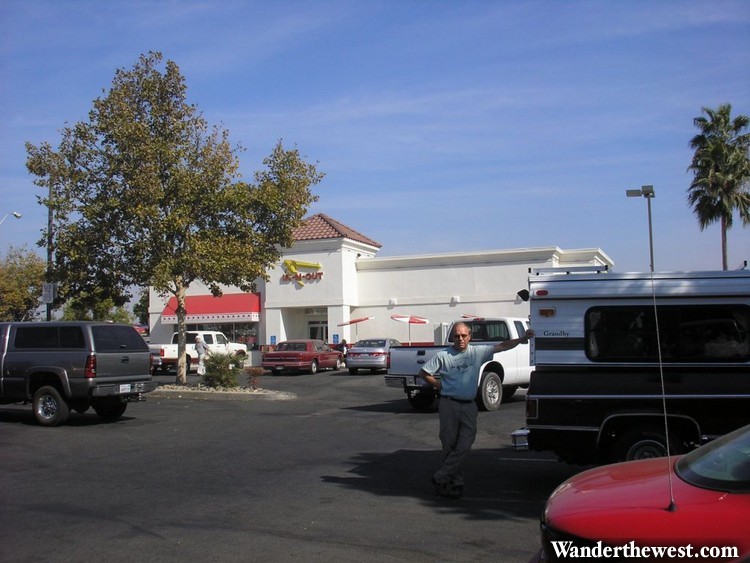 Once again it was getting late in the day when we got to the park and we found a camp site as soon as we got there at Potwisha campground. This was the first place we saw "bear boxes" in a campground. We put some of our food in the box, but we had no issues with bears. 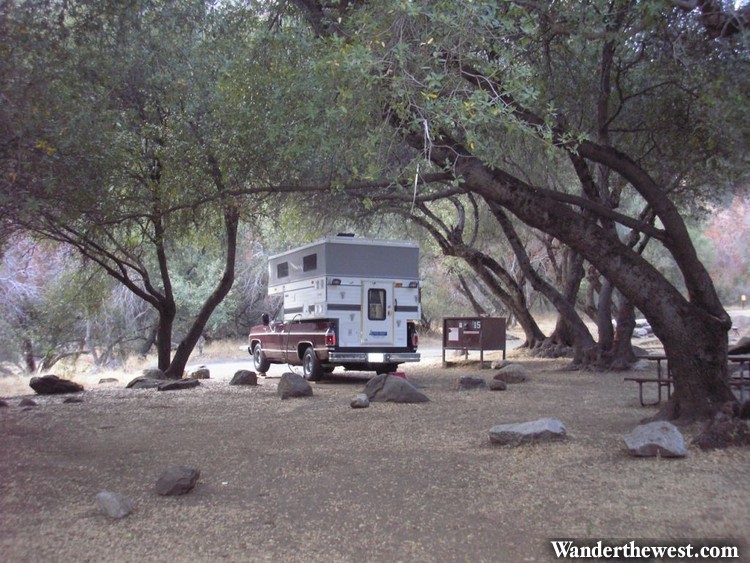 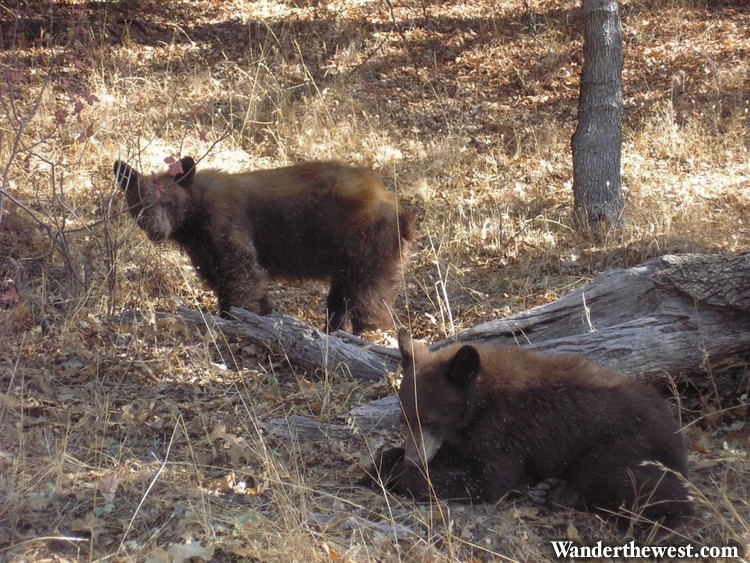 The next morning, we began touring the park. 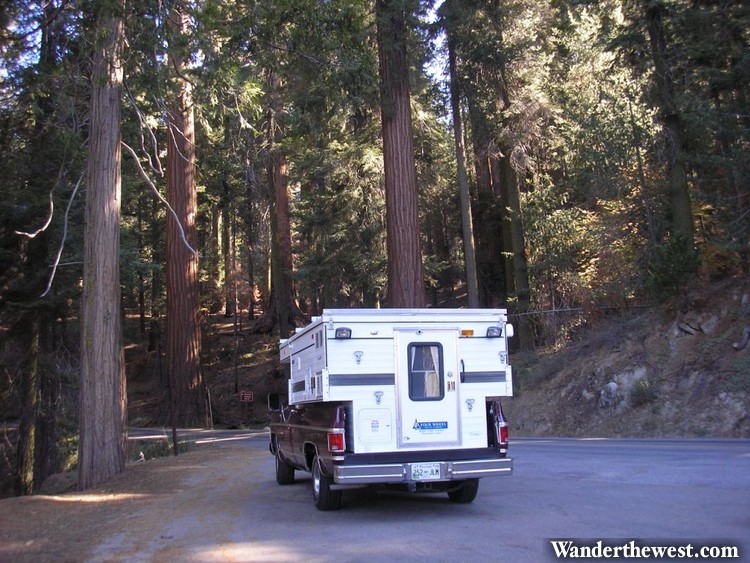 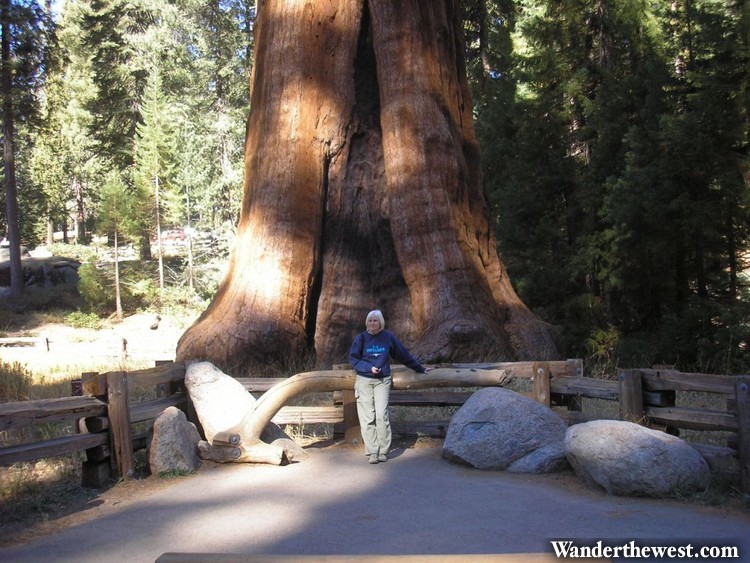 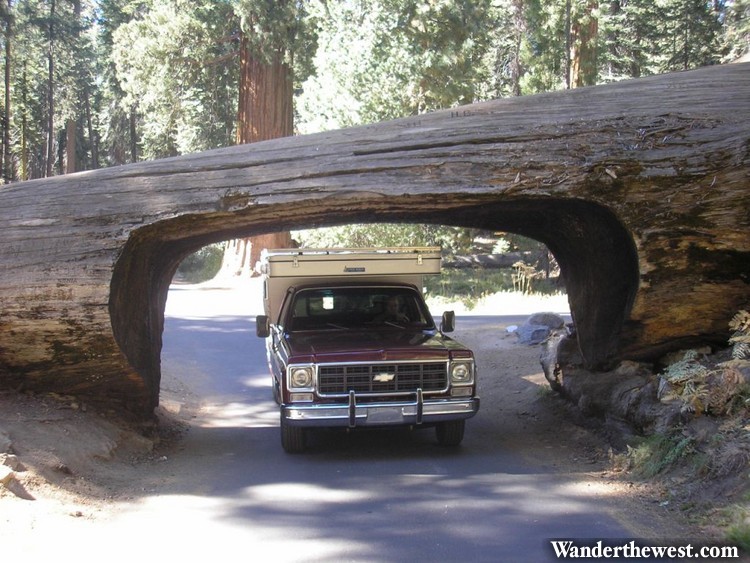 We took a short hike to the top of Moro Rock for some awesome views.
Here's a look east from Moro Rock. Mt Whitney is somewhere on the other side of that ridge in the distance. 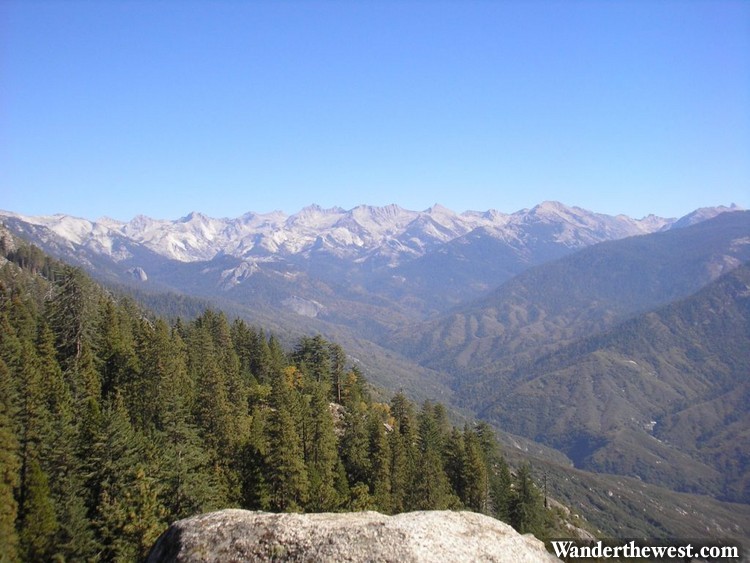 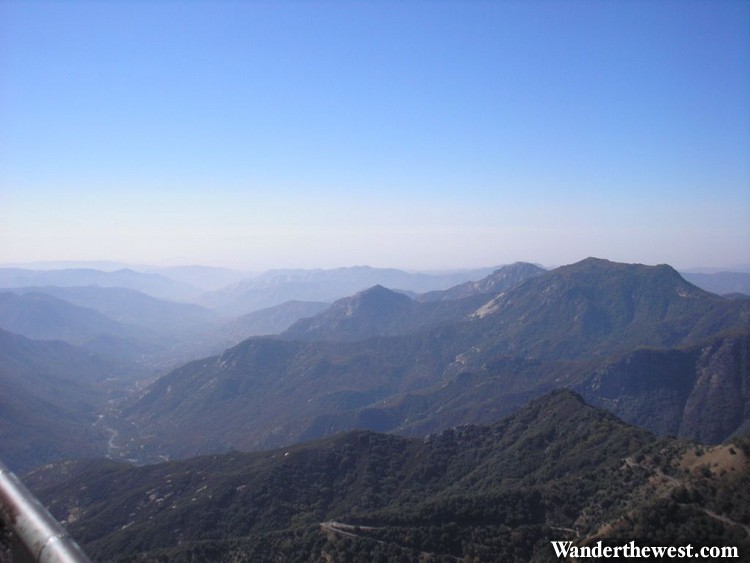 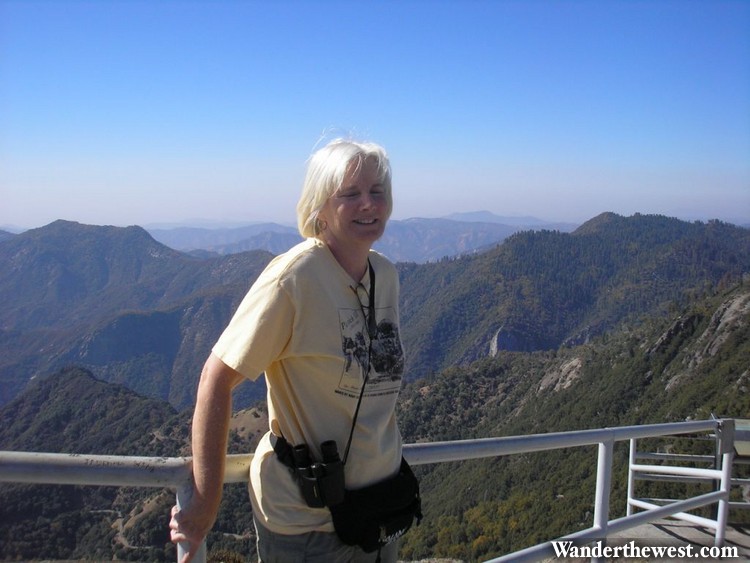 At this time of the year in Sequoia, many of the facilities, campgrounds, ec. are closed, but there still plenty of places to see here and there were no crowds. This was an absolutely beautiful park. We only spent one day here but hope to come back someday and hike some of the longer trails.

We were on our way for a visit to the FWC factory in Woodland CA, so we had to get going.

Our next stop was at the Four Wheel Camper factory on Woodland. I wanted to meet Stan and Chicali and get a tour of the factory. We arrived on a Thursday afternoon. Stan sometimes works on Saturdays so he wasn't there that day, and I didn't know what to expect when I drove into the FWC parking lot. However, I was barely out of the truck before this fellow walks up and says "buzzman". It was Chicali. He new I was coming and recognized my truck from the this forum. What a guy! He graciously invited us in for a tour. We spent the next hour or so getting a guided tour of the production facility. Chicali showed us the build process from start to finish and introduced us to some of the FWC staff and technicians. Chicali really knows these campers! I noticed there were also several customer FWC's there for repairs or updates. Over the past few years, FWC has been incorporating small, incremental changes and improvements to the campers. Chicali showed me some of the recent updates and a couple that I may want to add to my Grandby at some time. I'll probably talk about that in another thread.

That night we camped in the FWC parking and the next morning we took a shower, and then met with Stan. As with Chicali, Stan stopped whatever he was doing and sat down with Sherri and I in his office, over some great coffee, to answer our questions, and just talk about these campers, travel plans, trucks, etc, etc.

Both Chicali and Stan seem very responsive to customer inputs and needs and willingly offer any help they can with the campers. And Chicali monitors this WTW forum too, so he reads about any problems or isues we may have and mods we do to our FWC's. It surely doesn't appear that the weak economy is affecting their production. I would recommend a visit to the FWC factory. Chicali, Stan, and all the FWC staff rock! Thanks for the tour Chicali.

Here's some pictures of our visit. 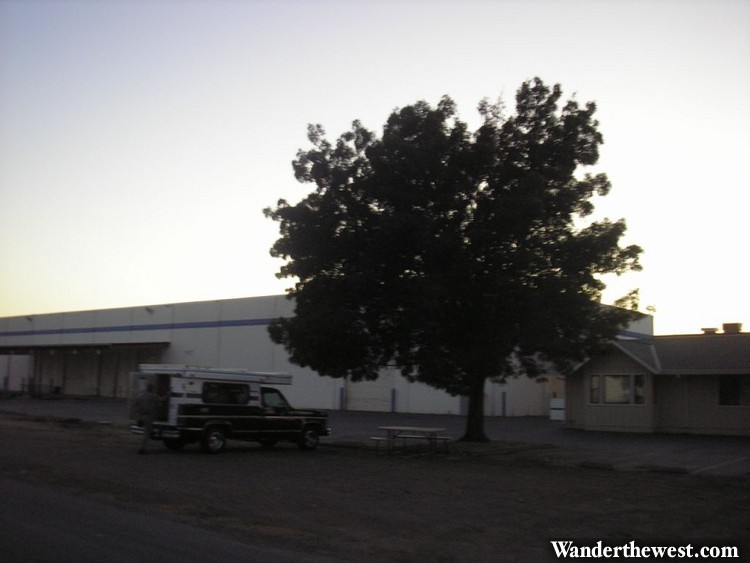 This is where our campers are born. 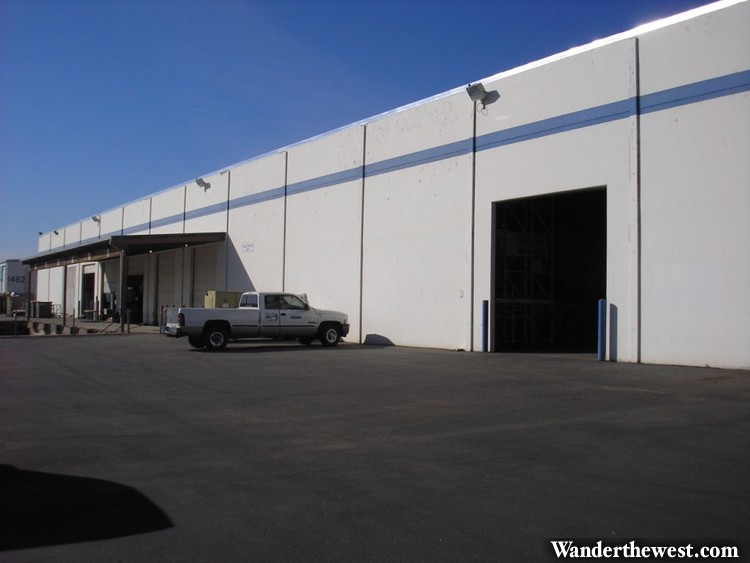 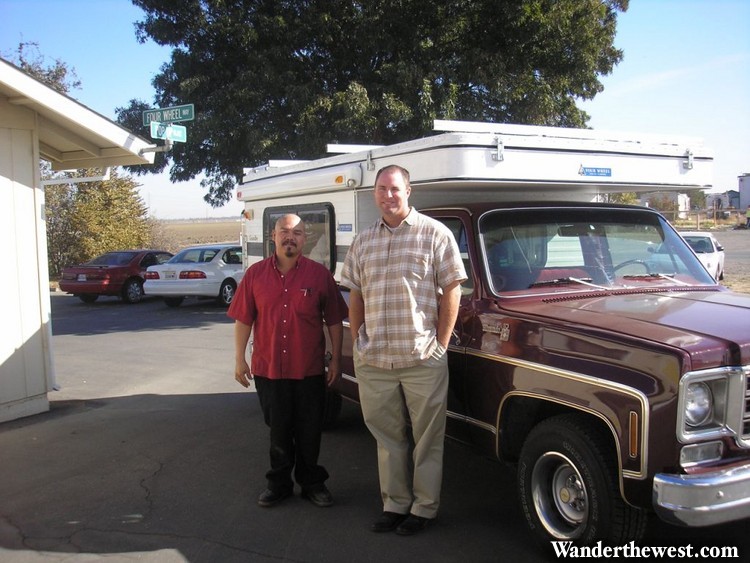 Checking out my truck 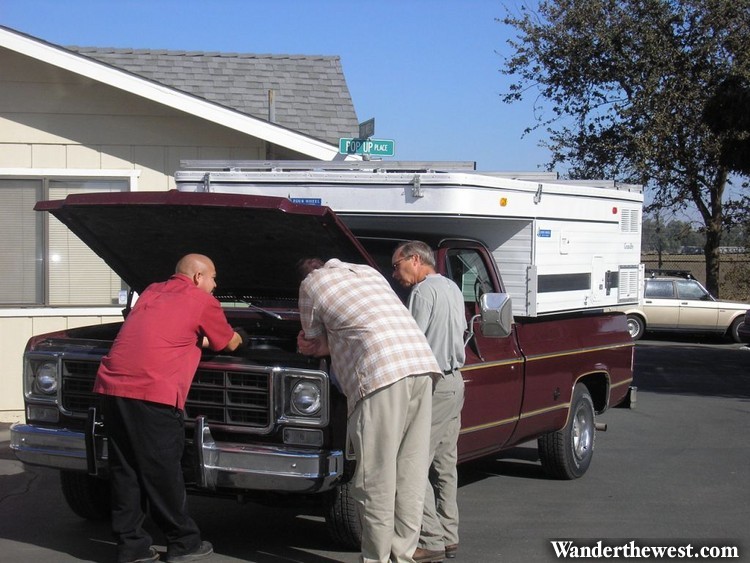 My truck and Grandby 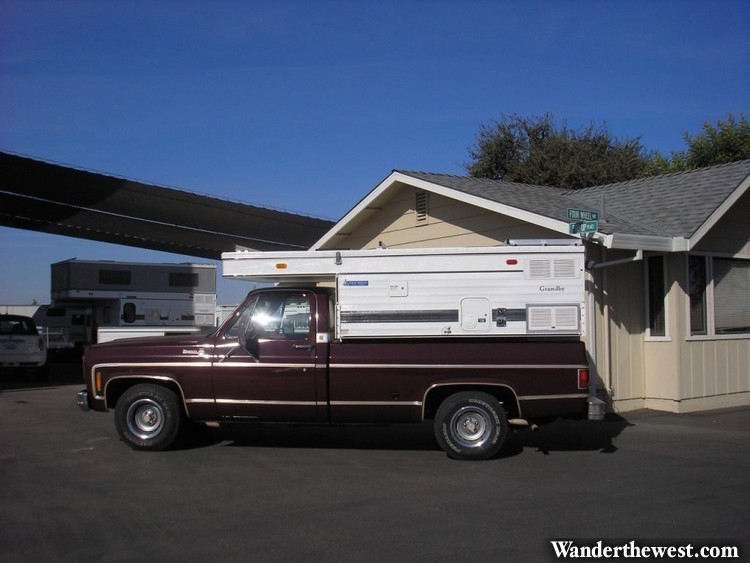 We departed the FWC factory just before lunch on Friday to head toward Lake Tahoe.

I'll bet you're still processing all the emotions and impressions on your spirits from this, and will continue for a long, long time.

Edna and I want to meet you!

It looks like you have dual tanks on that Chevy, 18 gallons each? How was your gas mileage with the Grandby?

Mark...yes we are still processing and re-living portions of the trip. The FWC factory visit was the halfway point so there is much more to come. I hope DirtyDog doesn't get mad at me for filling the photo gallery with my pictures. Our pictures, taken with a simple PHD camera (Push Here Dummy!), definitely don't do justice to the beautiful places we visited. We took about 2000 pictures and it's difficult sometimes to choose which ones to post on the forum.

John D. ...my truck has two 20 gallon gas tanks. I usually ran off one side and kept the other side for reserve. And I had to use the reserve a couple times in the isolated regions of the country! The fuel mileage wasn't very good. For the entire trip I got 11.4 mpg. The mileage would be as high as 13-14 mpg on flat land with no headwind, but in the high elevations and going up mountains, she was really working hard and sucking fuel like crazy. Thankfully the price of gas was dropping during our trip. We bought gas for less the $2/gal in OK. My camper and cargo weighed in at 1900 lbs so it was quite heavy. The truck drove very nice and was very comfortable to drive. It would be nice to have a modern computer controlled fuel injection system and a computer controlled transmission. Maybe someday...

Back to Trip Reports