33 replies to this topic

Sounds like my guy!   He uses a 4" grinder and thin discs.  Steady hand, straight lines.

I think he is very interested in this project and seeing it turn out well.  He is semi retired and mostly does smaller jobs so he doesn't get much custom work these days.

Wow this is very cool!

I could not see any new photo images.

Your project has the rapt attention of a LOT of folks....just wanted to give a heads up that the new images may not have gotten there.

Have you ever seen a Hide n Side up close ? I have not.

I am very impressed how you have taken on the utilmate shortcoming for FWC's....the storage shortage.

I have only seen photos of the hide-n-side.  I have no idea how many were built before the legal wrangling with Chrysler began.  There have been other similar designs as well, such as the Stahl Grand Challenger and the Royal Sport Body.

Unfortunately as best as I can determine in 2016 Scott Clare, Neil Long, and their company Innovative Truck Storage, Inc lost their appeal in the case of Scott Clare v. Chrysler Group, LLC, Case No.. 13-11225 (E.D. Mich. June 4, 2014) which resulted in holding the lower courts ruling that Clare, Neil and Innovative Truck Storage had infringed upon Chrysler's patent.  So I suspect the Hide-N-Side is not ever going to be built.  The Royal Sport Body (never made for Dodge) went out of production due to errors made during manufacture by one of their vendors which resulted in a bunch of unhappy customers and costly warrantee claims on the finished beds.

So I make my own.  It is a bit different from all of them too.

Here is the concept: 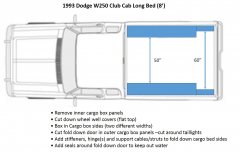 I made camper templates to make sure at least !" clearance is preserved all around.

Here is the front template (I made a rear template too) 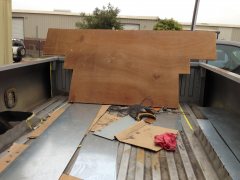 Cutting out the cargo bed interior walls and cutting down wheel wells.

I measured and preserved 11" of clearance from the top of the tire to the new top of the wheel well. 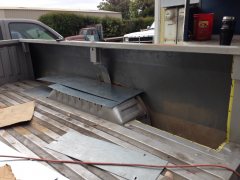 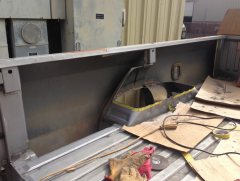 A mockup was made of the storage box to sort out height and clearance shape and weld connect points. 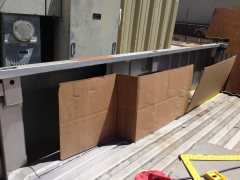 Passenger side storage box coming together 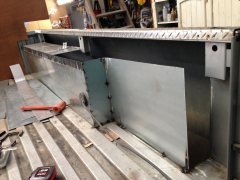 Passenger side fold down door cut from the cargo box exterior skin it will be attached with hinges at the trim line (the hinge will be under the black rubber trim. 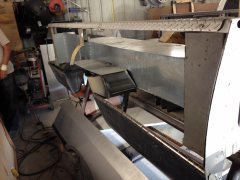