29 replies to this topic

I woke up with most of the windows of my house open overnight -- first time this year. That tells me that the meteorologists have it right -- today is the first day of [meteorological] summer -- summertime!

It looks like summer in The West, too, with the clarity of high pressure and and coast-hugging fog: 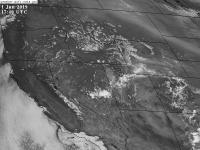 You can see the smoke from wildfires in Alberta, drifting down into the USA.

Yup summertime here on the Monterey coast,FOG with some afternoon sun.

Sure beats the weather in other areas of the country though.

Yea summer! Floated the McKenzie for 22 miles for the first day of summer.

Here in Pennsyltucky, we were getting severe thunderstorm and tornado watches and warnings daily last week and we're still having near-daily thunderstorms this week. It seems way early in the season for that as I normally associate it with hotter weather than we've been having.

The local TV station's weather crew was breaking in to broadcasts to warn residents in various local areas to take immediate cover as they were seeing rotation on weather radar.  I can't tell if that's because weather is more severe than it used to be or the weatherman now has more sophisticated tools to see it.

I'm still trying to get a sense of when the color echoes indicate rotation. The weather guy starts pointing at something he says is rotation and warns viewers to take immediate cover.  But I could also see another very similar set of colors nearby and he's not mentioning that area.

It has also been useful to see how quickly the tornado warnings pop up and go away.  And the storm tracks allow me to click on the tracks at tick-marks along them to see time-of-arrival of the cell at that point.  And if I click on the beginning of the track, up pops the cell name, it's speed, and the size of the hail (if any) in that cell.

At one point we were in a tornado warning and I could see storm tracks close by on either side of us.  I went outside with the iPad and was fascinated to watch the storms pass by while I compared what I was seeing on the RadarScope display to what I was seeing in the sky.  I didn't even get wet as they passed.  To my south, I could see spinning tendrils of cloud drop down out of the ominous-looking wall-cloud, intensify a bit but then slowly just kind of fade out and disappear.  Then my view across the corn fields blanked out as the violent rainstorm swept through.  To my north, the clouds were darker and roiling but I didn't see a wall-cloud.

I'd like to have lightning strikes but in RadarScope that only comes with a recurring-payment version and I'm not quite willing to do that at this point.

Yes, it is summertime. We took an easy few hour up country trip today. I felt good enough and safe to drive, a milestone for me. The Lady did not squirm around too much in the passenger seat as I drove. We drove up a small paved road til we hit snow still covering the road, about 6600 feet in elevation. A few vehicles were parked, snowmen were built. Many were hiking further up the road. We decided on a cross country route to a little known historic high country summer ranch site at around 7000 feet on the edge of a meadow. Travel was over huge snow patches, granite slabs, and sopping wet ground. The old compound looks long forgotten. In a few more years the old buildings will start to collapse. We last skied past this place about 15 years ago. It was good to return. The views from the meadow are outstanding of the snow covered Crystal Range to the east. We were always surrounded by the songs of mountain chickadees. It is summer.

Summertime???? Well this week is starting better than last week anyway, just got my cut-offs out-supposed to be 93-wow! Last week, took the new dog (3 year old BC/Aust. Cattle dog named Timber)) up to the Devils Garden on the Modoc NF to see how she would do. Temps in the 70's, good fishing, hiking  and beer drinking weather but after a few days,the weather changed-a cold front moved in,with high winds and  a freeze warning was issued and a 20% chance of snow-yep snow.  That was enough for me-headed home, had enough of the cold, might as well sit in my house.  Boy, flood warnings out cause the snow pack is melting, can't win them all I guess, but the heat sure feels good

Sure sign of summer here now - front mount snowblower off the tractor,The front end loader is back on.

I'm hearing thunder (so must be lightning) here in Central Oregon right now -- and so far it's dry... 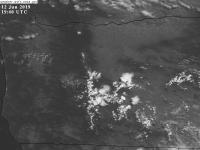