60 replies to this topic

I have a low cost wired Pyle 7200 backup camera with a snap on rearview mirror monitor. It will accept a second camera. No recording function but it sure helps when backing up. I have a wireless backup camera I bought to install on my box trailer but I have not gotten around to installing it yet.

I recently received the Southco rotary latches and latch actuator to install into my cargo bed with fold down side access to wheel well boxed in storage. I have previously posted pictures of this slow moving project and I hope to have it completed and installed on my truck soon.

I like your rear bumper set up. I need to figure out something for our truck. However it is a bit of a challenge considering the Keystone extends part way across the width of the tailgate when the tailgate is down. I have an idea using an articulated bracket that will work with the camper on the truck or off but I need to get with a fabricator.

Wow! 6 inch lift is a lot!. My tuck suspension is stock and it is already a climb to get in. I have been on some pretty gnarly offroad tracks with the camper on and I feel no need to lift the truck any more than it is. No need to raise the CG any further.

I am aware of Jungle Jim and Ramcharger central. I have considered ordering polyurethane bushings from him. I am also considering getting longer front leaf springs to make the ride a little less stiff. I want to upgrade to Bilstein 7100 reservoir shocks (or equivalent too for those long drives down washboard roads.

Ref posts on my truck:

Nice to see posts from another first gen owner.

Apologies for hijacking your thread on your truck. Here is a link to some images of the interior of my truck cab that you requested.

Sound damping material on floor (it really helps cut down a lot of noise from around the shifter cutouts!)

Have not seen a post on mirrors yet, is there one? First thing I noticed is a lack of rear and side visibility, thinking a rear view camera that replaces the rear view mirror but will also allow and added camera for side view. Or should I add extended side mirrors? Also my truck did not have the optional sway bars and being so tall I am now really noticing the corners! Would like to know if I can get away with just one and if so should it go on the front or back? which would give the most benefit ?

Thinking I should be able to squeeze a compressor in that space, what are others doing with it, and should I seal it up? Thinking about a door to his and store. Search hi and low for a porta potty that would fit the space and allow an adult Male to use, if you know what I mean. It had the option to have a quick release which makes it solid and easy to service. 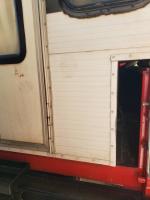 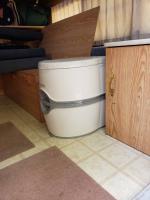 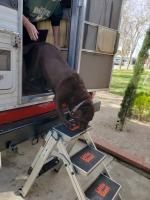 I have the parts to set up a "back-up" camera as my center rear view mirror. Been the plan for a while, just a round-tuit.

I dislike urethane bushings and avoid them when at all possible. The only such that I've found to not be disagreeable are those made by Old Man Emu.

The RoT with the bushings made in the US is that once they squeak they are done and need to be replaced. Once started squeaking you will never, ever stop them from squeaking for any length of time. Sadly sometimes their life-span before they squeak can be as little as 40 feet.

A desert race team that I had a passing acquaintance with was using the best urethane radius arm bushings that they could buy in their Class 8 Desert Racer. If they were lucky one set would last a whole race, but more often than not they had to replace them at least once per race. One race they ran out and had to put OEM Rubber in there in order to finish the race. 4 races later they realized that the rubber bushings were still in there. From that point on they only used OEM rubber radius arm bushings. It's not that urethane can't work, it's that most of them are made to a very low price point.

I put our compressor under the bed outside of the frame rail & forward of the driver's rear tire. Because the fuel tank is right on the other side I had to make the bracket clamp on if I didn't want to drop the tank, and I did not! Air tank sits in the same location on the passenger side. I used 10 feet of copper tube to cool the compressor's discharge before it reaches the tank and the pressure switch. Probably excessive, but I bought the roll just for that job so I used it all.

10’ of copper tubing to cool the discharge air? Brilliant! Any leaks at the fittings due to vibration?

The previous (original) owner of my truck pulled a fith wheel trailer. He had white painted steel extension tubes fabricated and installed to move the side mirrors further out. They work well but are showing rust spots and age.

My only complaint is that the longer tubes coupled with the tilt toward the rear displace the mirror location further back due to the mounting angle. I have long thought about putting a compound bend in stainless steel tubes to move the mirrors closer to the front. I will likely make this mod as soon as I get the modified cargo bed completed because I am going to repaint the entire truck.

Link to pic of driver side mirror on extended arm

Hello ntsqd nice clean looking install. My first thought about the copper is looking like a condensate trap. Might be wrong not an engineer. Have always seen the bleed at the lowest point. Lg compressor’s use a radius tube but don’t think I’ve seen loops.

Would you mind tossing a pix of your mirrors?

Really need some safe grab handle with it being so tall, so added this one. Had Derral from the weld shop add this tray underneath to add more batteries or compressor. Have a fresh AGM for the house part, but now I have room for options. Modified an old Warn front bumper for the front. Added Jungles shackle, but springs are hitting the frame, time his front support to move it back. 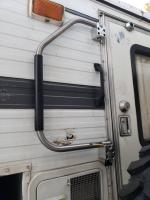 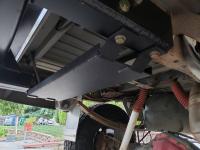 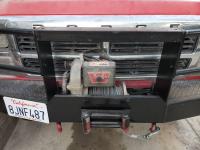 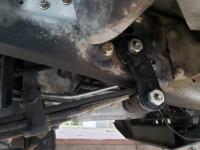