Prospective buyer here. Will a base F150 and a FWC Shell model work?

56 replies to this topic

So, what, you loaded up and weighed yourself one time and you'll never be over the GVWR of your vehicle? Geez. Give me a break.

Yes I loaded up the most I would ever be loaded up and was fine..

2017 Ram Tradesman 1500 with 8' bed and the 3.6 305 hp engine.  This truck is about as base of a truck as you can get.  Still has power windows/doors, cruise and a 32 gallon tank, so I was happy.  GVWR is 6600 but the Payload is 1880 which put us a bit better then most of the Rams.  We added a new Grandby in 2018 while updating the Ram with Firestone Air bags and Cooper E rated All Terrains.  Mpg runs between 13 and 17 with 15 being typical.  We have a small fresh and gray water tank and we try to use a lot of our former motorcycle gear (lightweight) when camping.   My only regret with my setup is that I wish I had 4WD and an extended cab for carrying a bit more.  However at that point, I would need to jump to a 3/4 ton to stay under the payload setting.  Love our 1/2 ton and Grandby. 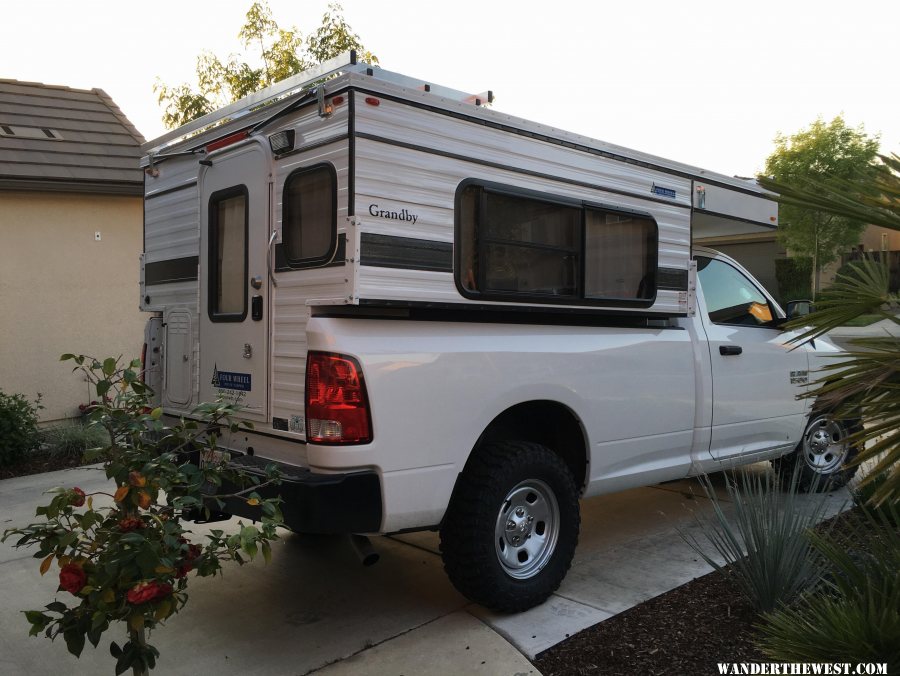 We've been running our 2017 F150XL for a year now with a Hawk shell and it's worked great. We have the 2.7 Ecoboost engine, air bags, 6.5 foot bed. We top out at 6350 lbs. fully loaded and weighed at a local truck stop.  Our vehicle is rated to 6500 lbs. The engine doesn't seem to strain at all, gets 17 MGP, has been on quite a number of road trips throughout the west, including a good bunch of rough driving in the Mojave desert.  Couldn't be more pleased.

Bjammin, Thanks! This is the experience I've been wanting to hear about. So you are saying that the camper plus humans plus stuff and you are still under the max payload? Any issues with rear suspension, handling, upgrades? I see Ford offers the 2.7l EB pyload package, did you get that?  Did you consider any other engine options, 4WD? If you could do it over again, what would you change?

I enjoy reading these threads as they are very educational. It is fun to read about what mods folks do to make things work. Also what people with they had done differently.

Natetripsus I am curious what you are going to buy now.

Thanks again to everyone who has contributed to my educational research. I'm so obsessed with wanting a FWC, my S.O. can't stand it any longer. She wants a house, I want a truck and camper. =)  The whole thing began with me spec-ing out the most minimalist rig. Actually this journey began a few years ago. I had an 07 Ranger Sport 4x4, 4.0V6, 4:10 axle, 1700lbs max payload. I was aiming to get a FWC Fleet shell on it but the thing got horrid mpg (empty), was not very efficient for my contracting work, had under body surface rust, and about 100k mi on it. My choice was either to get the FWC or get a new vehicle but not both.  After months of research we settled on trying out #minivanlife. I bought a compact cargo van- all purpose vehicle for my work, can be converted to a micro camper and is super efficient. Problem is the camping part was not much better than just tent camping.  I discovered, after a 2500mi trip around the western US, that I want more than anything the ability to stand up and move around inside, and she wants a heater and insulation. I had bought an amazing work vehicle, an efficient road tripper,  but a not so great camper so here we go again.

The new plan was to get a Taco or Frontier and a FWC Swift or Fleet shell but the payload #s don't work despite this popular combo. I don't get it? I must assume that people are just driving over GVWR.  I can see it might work with a shell model, just me, and maybe a bag of chips...  And yes I know every truck will need a rear suspension and tire upgrade. Now, looking at the F150 specs, the new aluminum bodies mean that the base models actually wight less than a Taco, have more space, capacity, and a lower price (depending).

A real breakthrough in my research happened this week when I discovered CruiseAmerica's Truck Camper rental. Its a Lance hard side (1600lbs dry) on an F150 Scab, V8, 2wd, (no heavy payload pkg).  A customer on youtube posted a vid about their experience and said it all worked great and the truck got about 15.5mpg + 2ppl, dog, gas, stuff. Well, if it can handle a camper like that and be good enough for fleet rental use, then the lighter FWC Hawk shell (940lbs) would be even better!  Of course, it has to be the 2wd v8 model that has that payload capacity sweet spot of 2320lbs.  This F150 config is widely available and affordable.  If you add the 4WD then everything goes to hell: payload, efficiency and cost wise. Then you need the heavy payload package and the price becomes greater than an F250. enter the rabbit hole.

So it begs the question, getting a 2wd 1/2 ton costs less in all ways and can carry the FWC Hawk or Grandy shell no problem,  but will I regret it? My last 4x4, I think I turned on the 4wd three times since I owned it but never actually needed it.  I live and work in the urban world, I like the Sierras (Tahoe, Gold Country) and AZ during mild winter conditions, and I've thought about the occasional off-road campsite but have no interest in over-landing or sport off-roading, Mostly concerned about slippery bad weather conditions. I hope to take long trips around western US and Canada mainly.

Any 2WD Truck campers out there?

4WD: get it or regret it? Must or bust?  2WD seems really efficient to me.

P.S.  By buddy has a newish Taco and we took it on a dirt road in NV (no camper).  When we got back to pavement, the 4WD got stuck ON and would not turn off. Turns out the switch failed.  Under warranty fortunately but what a hassle for just a flat dirt road.

You put a lot of great "thinking" into your info/choices.

As stated, I started out with a Ford Ranger 2WD.It worked out well took several long

trips,Alaska the longest and overall the truck was just OK. Had a small V6 so the power wasn't there.

Changing to a "bigger" truck was the option but sure didn't want to buy a new one.

The first gen Toyota Tundra was recommended to me by Marty at ATC. When I found a good match it happened to be a 4WD model.

I have only placed it into 4WD mode once in some snow over Carson Pass and on the Old Denali Highway (for better traction on the 130 mile gravel road).

I Didn't "shop" for a 4WD truck it just turned out that was what my choice at the time.

I don't regret it I actually like the way it drives.

of the picture.We just really like our rig and where it can take us.

So back to the choice 2WD vs 4WD our camping is similar to what you have described. A 2WD with good suspension upgrades would

be my choice if I were to start over.

Your thread has been a very interesting one to read with all the other member posts.

Yes.. lots to think about..

It is interesting how many seem to be driving around over GVWR without a care in the world..

I think a lot comes down to your needs. Like I said earlier, my truck/camper combo when fully loaded is right at GVWR.. That doesn't account for the air bags and good tires (and upgraded front brakes). Honestly, you don't even really feel the camper on there.. my wife was driving it through San Diego and was going fast and had to remind her we were carrying our home for the next 3 weeks, she said she forgot about it and the truck drives just like without it.

For us, simplicity is the key.. We can easily keep the weight with camper and all gear at 1500 or less.. not a problem.. some like more amenities..

For your application I think 2wd will be fine and, from what you describe, better suited to you.

I'm always cautious with mpg projections. Am happy for that couple and don't doubt their numbers but for my own comfort would want to search around for some more reports. Ford has made a real effort to offer engine choices to best match customer use and fuel economy.

Not what you're asking but we did both a house and camper around the same time. With a little luck and good timing each can be rewarding but they also can mop up time, attention and money. Our reality then was that, even working together, we could only handle one of them at a time and the house won out for more years than I care to remember. In the end though we came back to the camper and it has all worked out - thankfully.

Good luck with your decision.

So I did take a new F150 on a test drive at the Ford dealer.  They didn't have anything I would buy nor am I ready to buy but I did test drive the 3.3L regular cab short bed 2wd. At least this gave me a baseline comparison.  I thought the truck was plenty powerful for the smallest lightest wheelbase with a 1990lbs max payload. With airbags and E tires etc, a FWC Hawk Shell (940lbs) would make a fine, low cost, compact turtle home for one guy and a minimalist amount of gear and provisions. As soon as you add 4WD, the payload drops forcing you to get a longer wheelbase and bigger engine and lots of upgrades if you want max payload. Everything in small space design is a compromise. You want more of something, then you have to subtract from something else.

I was rather disappointed at the quality tho, the dash on this new truck was all warped and bubbled on the passenger side. The outside looks great but the interior has major QC issues. The salesman pretended not to hear me comment on it. I googled the issue and apparently its very common with Ford barely acknowledging the problem, a class action is in the works  Really makes me rethink wanting a Ford. I looked at used F150s online and there are some good low mi deals but wow, the interiors all look really worn out.

So I looked at a Nissan Titan XD v8 4x4 King cab with 2500lbs payload. The base model S comes standard with loads of options, the design and quality of the interior was superior and they offer a 5y/100k warranty included. As a small business owner they give all sorts of discounts. Just sayin. If a 1/2 ton truck needs upgrades and a 3/4 seems overkill, then this tweener option is worthy of consideration.

I guess this thread has gone off topic from FWCs to trucks but at least I'm sold on an FWC! I am leaning Hawk shell now as more cab seems better than more camper. Long bed Scab with a Grandly shell is the best of both worlds but seems too long.  Anyway, I'm waiting till the 2020's come out and then we'll see.

Also tagged with one or more of these keywords: Ford, F150, FWC, Four Wheel Camper, Shell