Alaskan converted to a travel trailer [FOR SALE]

I've posted on WTW a few times about my Alaskan travel trailer that I converted to a travel trailer. I LOVE the conversion and it has served me well.

I've been dating for the past 6 months and my new "better half" started going camping with me. I've heard no complaints but I suspect a real toilet, shower, A/C, and modern amenities would be greatly appreciated.

That said, I've decided to (reluctantly) sell the Alaskan and buy a new, modern travel trailer.

It's mounted to a 6x8 cargo trailer (purchased brand new) and skinned with white sheet aluminum under a 3/4" square stock steel frame for support.

I rebuilt all four roof pistons and installed new o-rings. The manual pump weeps a little oil but works well...I could not see spending $700 on a new pump (as quoted by Brian Wheat).

Overall, it's in great shape and is ready for adventure. Original stove works well and original rebuilt furnace works well...just keep in mind that it's a 60 year old truck camper in it's original condition. For the most part, I did not touch the exterior of the camper or interior other than having the seat cushions professionally reupholstered. I did remove, clean up, and reseal the front and rear windows with new butyl tape and silicone caulk. The roof vent was done in the same manner. I did not get around to doing the big side windows.

Laden with my all my gear, the entire rig weighs 1,900 lbs as per a certified weigh station in Phoenix.

I live in Mesa AZ. Asking price is $5,000...which is a fair price considering the parts and labor involved. If anyone is interested let me know. I thought I'd post here before placing an ad on Craigslist, Offer Up, or FB. 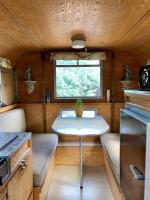 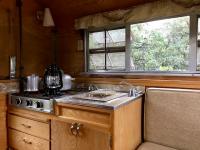 You did a nice job with that conversion.

Thanks for the compliment! It was a super fun project...actually not super keen about selling it.

For me it's perfect...I have a small portable tent set up outside as a shower / toilet...and I don't care about the A/C and other stuff.

I've heard no complaints but modern amenities for many newbie campers is a "must"...and I'm good with that. I'm just happy to share my love of camping with someone.

Again, if anyone is interested, please let me know.

Beautiful camper and setup! I don't even mind not having a bathroom in mine.

Is this still available?

Also tagged with one or more of these keywords: Alaskan, travel trailer