34 replies to this topic

I had put some sealant on one of my Bobcat windows.

It seems the stitch holes were not as tight as others.

Is that the problem some are having.

I have flaps attached so it doesn't matter.

I only noticed them as sun shone through them.

Frank, I've done the seam sealant with an ATC approved product.  It stopped the leakage through the stitches, but the water still accumulates between the mesh and the clear plastic and runs along that bottom seam until it comes out either end.

Thanks Vic. I haven't had that problem but over the years we haven't camped much in the rain.

My flaps cure the issue.

That is so weird that some leak and others do not.  If you can, please post pictures of your window seams/folds.  I posted mine in my build thread starting at post #206.   There are FWC Hawk pics in post #202

Mine are like your photo 2066.  I'm fairly sure that the water runs down to the bottom then along the seam (as others stated).

I think we have a fix.  We tried using the outside flaps, bought two different ladders to put them up/down with.  Was totally turned off by having to either:

1) Play it safe and close the outside flaps before bed - just in case it rains.  ESPECIALLY so when it is HOT outside and a thunderstorm is going to come through for sure at night.

2) Run outside and deploy (even if it is just to roll them down) in a powerful rain storm.  No fun...

3) I was about to use Turbocity Tom's method from this thread and decided to try one more time...

We had already sealed all the seams, which helped a lot.  Now at least the stitching didn't leak.  Water still pooled and run along the bottom and dripped out the ends though.

So, with a container of HH-66 Vinyl Cement in hand, and my wife ready to help do some stitching, we set about to create a "dam" that would stop the water making it to either end.

I applied HH-66 to about 3/4" of the bottom end of the Velcro that attaches the clear plastic part of the window, making sure to get some into the very bottom of the gutter too so water can't sneak in under the seal/dam we are making. 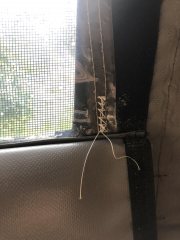 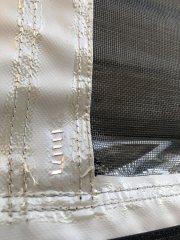 Then, with one of us outside the camper and the other inside, we applied 6-7 stitches (most of them double, ends quadruple) to hold the glued Velcro bits together.  Let it cure and test...

Tada!  Water runs down the gutter between the mesh and the clear plastic, and now encounters a tight seal before the end of the gutter where we stitched/glued it.  The water builds up high enough (not 3/4" though) to then run out of the mesh rather than find an easier escape inside the camper.

We tested all 4 windows with a garden hose on pretty high pressure and no leaks.  If it leaks now, it will be because rain pushes sideways hard enough to penetrate the velcro way up on the sides of the windows.

We're keeping the outside flaps rolled up for now.  Supposed to be a thunderstorm tonight, and instead of making sure the camper is locked up tight, we're going to leave it popped up to test the new windows again in real weather.

That looks like a good mod. Thanks for working through the problem to a good solution and sharing it!

Yes, this is the one drawback on ATC campers for me. My Ocelot windows leak without the outside covers. I know it only takes a couple of minutes to run outside with a step ladder but it's still a drag when weather rolls in. That said, I'd still go ATC for there flexibility and willingness to build the camper you want. Good people.

We seam sealed the stitches on our Ocelot and have not had any issues with leaks. Just like the old tents before the seam tape came along.

We never had an issue with the Bobcat windows leaking, but did have one isolated slight leak with our FWC Grandby.  It happened once, after traveling in a strong wind and rain.

This is something of a test in attempting to add this image of our flaps.

Currently, we are traveling with this pictured Puma.  We also have an old Keystone rebuilt by ATC that has the attached outside window covers.  Both styles work fine.  Thanks to one of the posters ahead of us in this topic for demonstrating how either type of flap can be propped open with a simple home made device.  A shout-out to Marty and the boys.  We are still traveling and went over 4K during the Christmas Holidays.

Back to All Terrain Camper Discussions