Aging backcountry enthusiasts in northwestern Montana, the wife and I just learned about FWC a week ago and bought a 2013 Grandby several days ago. Picking it up next week and have some questions. Plus you folks know about things that we haven't even thought of yet so any advice/input is appreciated. We want to spend some time in the FWC and either (1) keep and modify the Grandby, (2) go back to a Ford F250 to carry it, (3) sell the Grandby and get a Hawk shell and modify to our needs, or (4) something else.

We'll start with the Grandby on a 2012 Tundra (double-cab, 4x4, tow package) with 6.5' bed, meaning the camper will extend 1.5' beyond the bed. Reading through this forum, it sounds like half of you would leave the tailgate on and half would remove it. Thinking of leaving it on at least for the drive home. Truck tires are new 10-ply Michelins. Having the Boise FWC man install 3-way plug and eye bolts in truck bed, and adding progressive springs to the rear axle. The FWC man in Bozeman recommended these helper springs over air bags, so we're taking his advice. Truck is listed at 7,100 lbs GVAW with maximum of 4,150 lbs in the rear.

How are we doing so far? Will this combination drive home just fine, or will the Grandby squash my Tundra like a bug? Also, I'm a minimalist and the wife's a maximumist — will I ever be able to convince her to go to a smaller FWC after she's camped in the Grandby? Oh yes, we travel with a large border collie and a medium shepherd mix, and I often end up as the 4th priority for sleeping space.

We spend most winters camping around southern Arizona, and get out in the backcountry when we can during Montana's short summers. Besides recreation, I still work as a wildlife biologist and landscape photographer (intermittently during COVID), so I need a work camper that isn't afraid of rocks, branches, hail, locusts, plague, etc.

Any thoughts are appreciated! 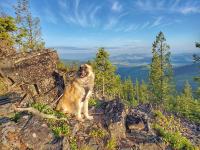 Have a great time I have no experience with Toyotas and Granby's but I have had 2 with a short bed Ford both for many years and many trips.  I left my Tailgate on. It just made sense! The floor of the camper is meant to be supported even the last 1.5 feet.  Just my 2 cents have fun I love FWC campers


thank you all for a great site

Welcome to the cult John.It does sound like you are on the right track.

The one thought I have always had about leaving the tailgate on is,

How do you get to the "crank hole" to lower the spare?

without the tailgate on.It seemed to be OK fro him.

Can't give an opinion about your truck/camper combo. There are both sides about weight.

I have a ATC Bobcat on a 2002 Tundra AC 4x4 and it works just fine,but it's a bit lighter than

your Grandby I think.

These campers offer a lot of fun but space is a premium.

Good luck and have fun.

Thanks Frank. Cult seems to be the right word! Pretty interesting group here.

We've looked at access to our spare tire when the tailgate is down. I read where someone drilled a hole lower down in the plastic part of the bumper to access the tire lowering mechanism, but I'm thinking about just risking the drive home "as is" since we have brand new tires and will be on pavement the whole way. Haven't made up my mind yet. Or more accurately, I've made up my mind several times in several directions.

Welcome aboard. We started with a 2003 Hawk on a 2000 Tundra on the truck full time. Went through a couple of sets of rear axle bearings. Upgraded to a new Tundra in 2011 and then upgraded to a new Hawk in 2014. Again, the camper is on the truck full time and we have had no issues. That being said, I would be concerned about the extra weight of a Grandby so far behind the rear axle. I think eventually moving to a Hawk or to an F250 would be a good idea. In the meantime, getting it home on your current rig with new tires should be fine.

Can't help you with the wife. You wouldn't be the first to buy a FWC only to sell it and move up to something with more amenities (like a bathroom) to appease the better half. I just happened to get lucky and when we are home my wife can't wait to get out in the camper again.

Thanks Magellan. I'm curious, when the rear axle bearings went out on you, did they give you any warning or did they fail suddenly? This new-to-us Grandby has a privy but no shower. At least, lacking a water heater means it's about 80 lbs lighter. We'll soon find out how well this explanation flies.

The bearings went slowly. We were able to replace them before they failed completely. But that was on a 2000 Tundra, the first year they were made. Our 2011 Tundra has had the camper on it full time since we got it new in 2010 and it has had no issues at all with the rear axle bearings. So I wouldn't worry about it on your 2012.

I should mention that we do have airbags on the back. They don't help with how much the truck can carry. They just put the truck back to a level ride.

I never verified this so I may be lying.

I don't know what the Tundra bed looks like, but with the Toyotas I've had, the raised ribs in the bed floor don't come all the way to the back of the bed, so a few more inches of the camper floor are unsupported than it appears if you don't take that into account.

With the Eagle built for my 1st gen Tacoma, at least 8-10 inches of the rear of the floor was unsupported, so it seems like FWC is fine with a certain amount hanging off, but I don't know how much would be too much.

Could you build something to go between the bumper and the back of the camper so it's supported further back? That might cut your overhang by half or more. I've seen that done somewhere.

I've never heard of a maximumist before, but I like it and I'm going to start using it on my wife too.

I am an older photographer with a 2014 Grandby on a F350 and live in Hamilton Montana. Truck is stock but I am always adding stuff to the camper. I regularly get to Northwest Montana and enjoy Utah as often as possible If you want to chat give me a call sometime. 406-360-1226

Also tagged with one or more of these keywords: Grandby