​Picked up the 2013 Grandby with our 2012 Tundra​ and camped a few nights during the 520-mile drive home. All told, everything seems to work well together.

Before leaving I bought new tires (10-ply) and removed a 95 lb. brush guard. In Boise I had the FWC dealer install the eye bolts and 3-wire plug, and they also added progressive helper springs on the rear axle. The Grandby slid in and covered all but 6" of the tailgate. For some reason, the front turnbuckles wouldn't reach from eye bolt to camper bracket (even when unscrewed into 3 pieces) and I had to add heavy-duty locking D rings on the front turnbuckles. Has anyone else had to use extenders when mounting your camper? 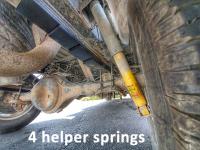 The roof has a 130w solar panel, and the wife can't lift either end to pop the top. I know the roof pistons don't last forever, but how can I tell if/when they need to be replaced? Her birthday is coming up — might get her one of the hand cranks like this one: https://www.amazon.c...5d-b31d6b1bfbee
​
​Backup camera in the tailgate now faces down. Found a plug-and-play ​replacement that I could mount on the license plate or the camper, but it runs $200. Has anyone just removed the camera from the tailgate and mounted it elsewhere? Anyone else as cheap as I am? Anyone else feel like FWC should pay us to advertise for them? It's almost like they used their stickers to hold this camper together. I edited one of them with a sharpie. 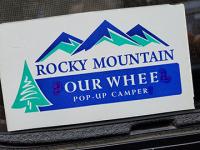 And then there's the weight issue. With extra springs, the truck handles surprisingly well and doesn't squat or shimmy or bottom out at all. Weighed the Tundra before and after adding the Grandby. The camper weighs about 1,810 lbs "as is" (full propane, no water, 4 jacks). Tag on camper says dry weight of 950 lbs, so apparently the added options comprise the other 860 lbs? Truck and camper together top out at 7,900 lbs, which is 800 lbs over the truck's GVWR. But the front axle is 400 lbs below the GAWR while the rear axle is 150 lbs over GAWR.
I understand that helper springs don't change how much weight the truck is supposed to carry, but I was pleasantly surprised by how well the Tundra handles with the Grandby's load. Takes a little longer to start and stop, and it leans a little more around corners, but otherwise the Tundra seems to handle almost as well as without the camper. Now, if the bearings blow out or the axle breaks tomorrow, I'll be surprised but not pleasantly. Gas mileage without Grandby 15-18 mg, with the Grandby 13-15 mpg, driving 65-75 mph in mountainous terrain. (Can't drive a stock Tundra over 75 mph until they build gas stations closer together.)
​Thoughts? Thanks!​

Many people either add or upgrade their rear sway bar to a Hellwig Bigwig sway bar to help with the leaning...

Yep, sway bar. buy the speaker crank, remove the legs. I added another piece of plywood under the pieces in our Ocelot to provide more support for the speaker stand pole.

Glad you enjoyed your Grandby and time in Idaho.  Thing about the Tundra is a small gas tank, and many of my trips were based on proximity to gas.  Fuel capacity is partly the reason I went with a bigger truck...36.5 gal gas tank!

For lifting the roof...

The roof has a 130w solar panel, and the wife can't lift either end to pop the top. I know the roof pistons don't last forever, but how can I tell if/when they need to be replaced? Her birthday is coming up — might get her one of the hand cranks like this one: https://www.amazon.c...5d-b31d6b1bfbee

That speaker stand is a great solution.  My wife has an old shoulder injury that prevents her from lifting the roof.  I removed the legs on the stand because they aren't needed for raising the roof on my Hawk.  But I use a piece of rubber mat square on the board on the ceiling to prevent damage.  The speaker stand makes raising and lowering the roof an easy process.

Congratulations on your new to you camper.

I have the 38 gallon capacity fuel tank on our Tundra. Helps with range.

I don't have sway issues. Do have firestone airbags and E rated tires. Works very well.

And it is your camper -- you can cover up all the logos with anything you want.

For lifiting the roof I use a ratcheting cargo bar:

Compared to the speaker stand, it is not only a lot less expensive, but smaller, lighter, has padded feet both ends, no assembly. It can also be used to secure gear, which is its designed purpose. I use it to keep gear boxes from falling off the bench in the camper. I just grab it, stick it under the push panel and crank.

Be aware that the cargo bar has a 50 lb. weight limit and the speaker stand has an 80 lb. load limit.

Glad to see you bought 10 ply tires. Biggest concern with Grandby on the Tundra is the overhang on rear which shifts weight backwards, not good!

We considered buying  a new FWC but my wife could not lift it either. So went to a Hallmark Milner which she can either hand crank or lift with rechargeable drill.

What's the rule of thumb as to how far over the GVWR you can go on a Tundra?  In opinion of course!

I have a buddy that is solving into it right now with his new Crew Max 5'5" bed and has determined ~1200lbs of camper should be safe.  But really curious as to how much weight can ya go over GVWR before having an axel issue?

Tundra's have alot of power, they will pass everything but a gas station. The concern you should have is stopping.

your truck with the camper while driving in the mountains. In all my years working in a Toyota Dealership service department, I saw alot of overheated rotors from over loaded Tundras. Both the engines and transmissions are solid. But it's still a 1/2 ton truck, with 1/2 ton brakes. The quick links work well to extend the tie downs, I agree you should use lock nuts on your turn buckles, or throw them away and get some Torklift Fast Guns.

Also tagged with one or more of these keywords: Grandby, Tundra