Side Rack Instead of Yakima Rack

19 replies to this topic

When I removed the factory rack from our Fleet to lay down flexible solar panels, I had intended to install Yakima tracks so I could carry the chairs and a few other items that I had been carrying on top.

We meander, so we generally change location most days. The problem with gear on top is that if we decide we want to setup the chairs after popping the top and setting up, we have to drop the top, get the gear and then pop-up again. It’s a minor hassle, but more often than I care to admit, we just don’t do it.

Well, the first thing I noticed after taking off the rack, the gear on it,  and the Zamp panel was about a 1 mpg improvement in gas mileage. I really liked that and began to think about alternatives to a rack on top.

The solution was a side rack, inspired by FWC’s surfboard rack. It holds our two chairs, which are now easy to get at, even for lunch on the road. It can also carry our folding crab pot and clam gun. I think a kayak or canoe would be too wide, so a side rack isn’t for everybody.

Materials: 4’ 2x2” x 1/8” Al angle, 6’ x 8’ poplar cut down the middle to make a right-angle. I should probably have gotten 6’ of Al angle so I could run a second bar across the bottom to carry more odd stuff. 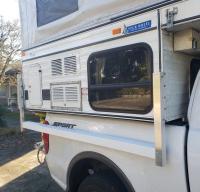 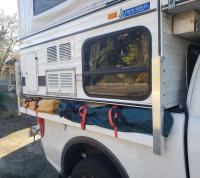 You could easily fit a bag of skis there. Cool idea!

Excellent idea to use the jack brackets....and you seem not to overdo it with too much weight.

You camper fits really low on the truck sidewalls.

We have about 5-6 inches height which gives more storage space.

I got some paint protection film that I plan to put on when the weather warms up.

We've made two short trips (mostly main roads) and gone from about 15.5 to about 16.5 mph according to the Ranger's mpg reading. We will complete our vaccinations in two weeks and plan on a 4 week trip on varied road types. This should give us a much better picture of mpg. The directors chairs on top I'm sure created a lot of turbulence. I'll post an update.

As an aside, while vaccination will protect us from serous Covid19 consequences, we will continue to wear masks and distance to protect others in case we get contagious.

I am interested in your notion of trying to improve fuel mileage.

For the hundreds of Freeway miles we put on getting to somewhere interesting , so am I.

Do you know what the little stick on fins are called that a lot of the young folks add to their street racers ?

They are supposed to break friction on a trailing edge....I think

I have seen them on commercial trucks lately so they must have some effect.

I have toyed with attaching some to the rear top and maybe sides of the Hawk.

Like you I try not to carry anything up top unless and until we reach the dirt.

PS Our 2016 Tacoma has essentially the same thing on much of the body side trim.

I'm not a mechanical engineer, but I do know that it's turbulence that creates the drag that's the main drag on your mpg. And it's usually tricky to find and to identify what you need to do to reduce turbulence. It's worth noting that today's cars pay as much attention to the aerodynamic shape of the back (probably more) than the front. In my case, the chairs and rack were obvious.

Without the benefit of a wind tunnel or a test road, it's hard to know if an investment in fins, fairings and such is worth it.

The test road is an interesting technique: You need a seldom traveled road with a nice hill that, coasting, will get you up to 60 or so mph and that drops down to a relatively flat or slightly uphill stretch. From the top of the hill, only coasting, you see how far your vehicle will coast, first without changes, and then with changes. Just make sure any head or tail winds are the same for each run. The greater the coasting distance, the less drag.

Also tagged with one or more of these keywords: rack, yakima