16 replies to this topic

Thought I would post this information for those who might be thinking of changing out your FWC installed Atwood propane heater.

Last year, after a couple of trips with 20 deg nightly temperatures, I decided to explore a diesel powered heater solution when I ran out of propane on both trips. I initially wanted to just remove the propane heater and install a diesel heater in it’s place but after some problem solving, I figured a way to open up the propane heater space and install the new diesel heater outside the camper to recapture the space for more storage.

This solution will not work for everyone but may spur some thoughts on the possibilities. First, my camper is mounted on the truck using the Torklift frame mount system. I previously had the bed mount on my older F150 but when I got my new truck (F250) in 2018, I decided to use the frame mount. My F150 (2013) showed signs of deformation in the bed due to the Hawk pulling up.

This allowed the area under the camper where the camper turn buckles are usually connected to be a free open space. The following photos will help to clarify how this is all installed.

I piped the heated air through the second access door. The inside air is not recirculated. Outside air under the camper is drawn in, heated and sent into the compartment. The 2KW heater is more than adequate for the job. Anything larger than this would be an overkill.

Initially, I had purchase an inexpensive Chinese Diesel Heater ($150) After receiving it, (they sent the wrong, 5kw, size) I set it up on a test bench and didn’t like the build quality and the larger size of the 5KW heater. I bit the bullet and purchased the German Webasto heater on eBay.  I eventually sold the Chinese version on Craigslist.

The Webasto is hands down is the much better made product. I’m suppling the diesel fuel via the 2 gallon Rotopax container mounted (Rivet nuts, love those things) on the front wall of the camper. On my maiden journey with this new heater, in 20 deg night time weather with the heater on for 8 hours/night, the  tank will probably last 4-5 nights. The heater will cycle off/on being regulated by the controller.

Hope this helps anyone looking for more information on this type of heater as I had a difficult time finding detailed install information for a FWC. 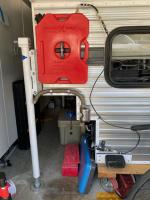 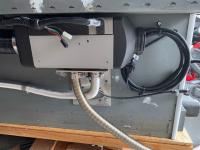 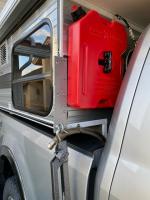 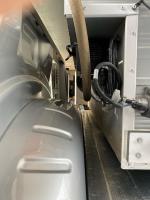 Great post and thank you for the pictures. One of the reasons I decided to go with the Grandby shell is because I plan to install a Eberspächer or Webasto diesel heater. It would be great if that were a factory option.

Based upon you and a few others recommendations I too am installing the Torklift system on my RAM so I will have that space available to use. I had been thinking about using that area for water storage but that conflicts with my cold weather camping so I am still undecided on what to use that area for.

I did notice the forged eye bolts being used as part of your tie down system and wanted to mention that forged eye bolts, even those with shoulders, are never designed for 90° loads. If my memory serves me correctly, most are designed for a maximum of 45° and at that they lose 75% of their capacity.

Getting back to the diesel heaters, I have read where a few folks leave them on all night on the lowest setting even in the coldest of conditions and they say they work wonders.

Thanks for your feedback. The heater worked well during my inaugural trip last month. So far all is good with the heater.

Appreciate your comments on the eye bolts. I’ve had this since 2018, so far have not been a issue. What would you recommend as an alternative?

that is an interesting solution, thanks for the post

Thanks for your feedback. The heater worked well during my inaugural trip last month. So far all is good with the heater.

Appreciate your comments on the eye bolts. I’ve had this since 2018, so far have not been a issue. What would you recommend as an alternative?

Great to hear the heater works so well - I just can't wait to install one and enjoy the warmth also.

It's a tough call on the eyebolts since I am not sure what the loads being encountered are especially since your Torklift has a spring to dampen and spread those loads. My plans were to pick up some flat stock about two inches longer than the lift brackets, drill three holes and bolt them onto the factory lift brackets. I would have that extra two inches hanging out the bottom and would just drill a large enough hole in the extension to install the hook.

My goal was just to share with you that those eyebolts were not designed to be used that way. They may be perfectly fine for your application although I at least wanted to share the info with you. I call manufacturers all the time and ask for installation data, charts, etc. and most are happy to supply. Even on the simple things like nuts and bolts.

If the turn buckles are in place, fitting the diesel heater in there won't work?
I am waiting on my ATC shell and was also planning on adding a diesel heater, skipping the propane system all together.I thought of mounting it inside but if could be installed like yours would be awesome.
There is a new chinese company Lavenar that brought their version of Espar on US market, and has better parts and good reviews for appx $200.

I've read about Lavenar but haven't seen their product to comment. They have an active English speaker doing their marketing and it seems to help get the word out.

If you use the internal mounted turn buckles, it will be difficult doing what I did. Both the front and rear (right side) access doors are not available to be used as the space is no longer available. The front access door is now blocked by the heater and and back access is now being used as the hot air vent into the interior. You may be able to figure out a different mounting configuration but those two areas were the most accessible to avoid the truck wheel well protrusion.

Well done! Did you ditch propane all together or do you still have it for other appliances? I assume your truck is gasoline as you might have tried to tap into a diesel truck fuel tank for the heater?

I kept the propane as I still have the stove and water heater. We usually don't cook indoors so most of the propane is now used by the water heater. (Just can't convince the wife to take cold showers.) I'm intrigued with the on-demand heaters but it would be difficult to justify the expense. As it is, I blew my budget on this heater. Having the diesel heater now allows me to carry only one 10# tank instead of two and I can go a much longer without worry of running out of fuel. (added bonus is the additional storage space where the 2nd tank was.)

Also tagged with one or more of these keywords: diesel heater, Hawk