After about a year of dreaming and waffling, my girlfriend and I dropped in on a truck camper combo. I'll save the full backstory, but here's the gist. We are weekenders, living in a city in the PNW. Summers are spent climbing, winters spent skiing.

We had romanticized a real vehicle for sleeping -- pretty much from the onset of our experience in a 2001 astrovan. It was always, "when we get rid of the astro we'll..." And when the transmission blew up last month, we began seriously down the road towards a truck camper. After one failed attempt at a truck/camper combo -- seller backed out an hour before we were going to pick it up -- we turned around and bought a truck. Two weeks later, we scored a Hawk -- thankfully right in our own backyard.

The fine folks we bought it from dubbed it the Mars Hotel, a reference that fully went over our heads. But we're sticking with it, because frankly, why wouldn't a guy.

We started by taking it up to our winter haunt, which made a solid basecamp for the day... 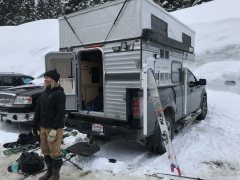 Punched it out to the desert for some camping and sunny climbing in the morning... 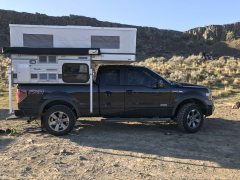 ...Before returning back to our winter haunt for the last licks of lift service for the weekend... 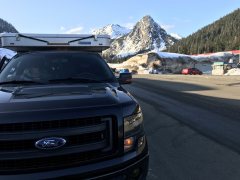 Wally Hatz, Welcome to the site.

That's sure a great find. Isn't it great when all things fall into place.

Enjoy your rig and have many long years having fun with it.

FWC rigs were meant for the climbing/skiing crowd!

Wally, welcome to WTW!  We look forward to seeing your adventures in our trip reports.

Yay -- another member of the WTW community! Welcome Wally!

Hi wally_hatz congratulations on your rig. Welcome, did you thank the guy who backed out?

Certainly will be some Trip reports -- or more realistically images from weekends out and about. But man, are we stoked to have something in time for volcano/big mountain season. Can't wait to have a comfy home to come back to after long days in the hills.

Also tagged with one or more of these keywords: intro, fwc hawk, fwc, hawk, f150