2 replies to this topic

I bought a 1972 8' CO in December 2020 for quite cheap. It had been on a 1972 Chevy C20 utility body since purchase, and had been well loved but seemingly well kept. The seller had bought it for the truck and never used the camper. He noted that there was some signs of water damage but I wasn't able to check it out thoroughly as it had already been hoisted up in order to place it into my 1989 F-250. (clicking photos should enlarge them) 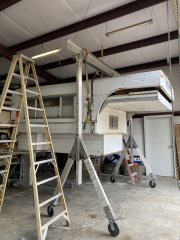 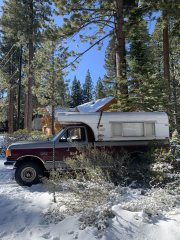 In a tale as old as time, the water damage was much worse than it looked. There was significant leakage all around the cabover vent. The front roof rack had probably hit something and had torn through aluminum on the side, allowing water intrusion. The reverse-lapped curved roof edges of the cabover had separated and the wood was destroyed. 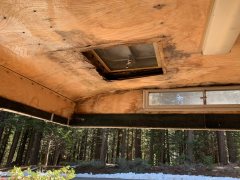 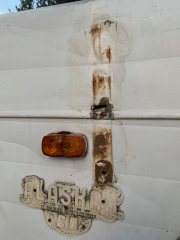 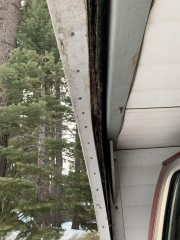 The camper would need major surgery. However, I wanted to use it before committing time for this so I made some brackets to hold the really bad curved section together, covered big holes in the aluminum, bought & attached Reico-Titan jacks to allow removal and provide tie-down points. 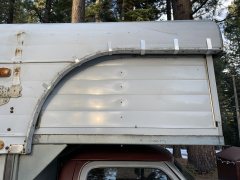 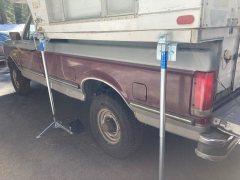 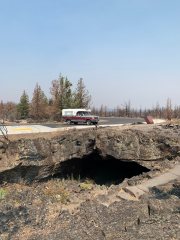 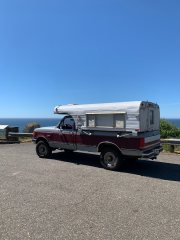 At this stage the water system didn't work, the stove didn't work, no electricity, no heater - there was a lot to do. But I went camping and skiing off Tioga pass near Yosemite, Mammoth, went down to Southern California, went to Crater Lake and the Oregon Coast. It held up pretty well but I was just deferring the big project. 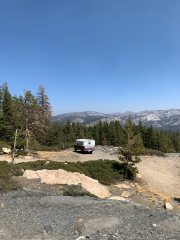 Passing through Mojave there were serious crosswinds and as I drove I could look up and see the cabover top lift. Assumed the rot had compromised some structural soundness, I started wrapping the cabover with a ratchet strap. I grew to really hate the rotted cabover section, I never slept up there since the ceiling was a bit flakey from the gross water damage. I had wanted a NCO in the first place - their look is a bit more distinctive, it would heat up faster and retain heat better, seal up better, allow to be raised partially while being sealed, and not threaten to blow off while driving in a high-wind situation. So I figured that I would simply chop the cabover section off.

In fall of 2021 I had about a month in between jobs, and wanted to take the camper with me, giving me a hard deadline for completion. With some help I started dissembling. 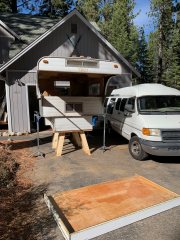 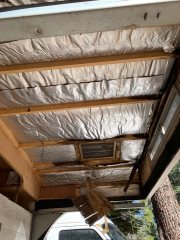 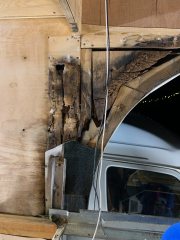 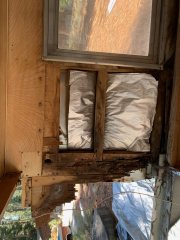 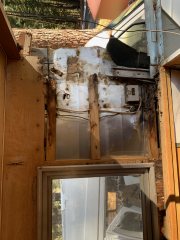 The front corner walls in front of the side windows would need rebuilding. I don't have good pictures of this but I used 2x2s with some at 45 degrees for rigidity. It took a few days to tear down, mainly unbolting, hacksaw sawing, snipping aluminum shears, angle grinder for the metal cabover supports. The factory insulation seemed a bit asbestos-y so we used masks and gloves. Overall - not too difficult. 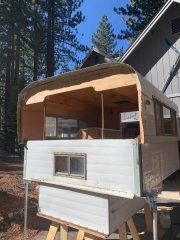 During this I was also working on minor side projects. Tore out the 50-year-old water tank and cut the water hose so that it could simply draw from gallon jugs. Resealed main top vent. Replaced the flooring with some nice spare hardwood planks my dad had. Made the bottom drawer flip up to in theory store skis (this wasn't very well thought out, I always have my Little Giant ladder blocking this - great ladder by the way) Installed a gas system - a 5lb bottle would go in the wheel well outside the camper, and hook into a camco wave 3 heater or the stove via a quick release nozzle. Redid the Pirelli seals. Replaced the O rings. 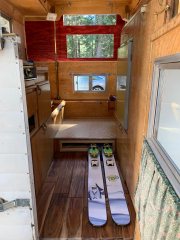 You can see the new red-stained front wall in this picture. We want to stain various other interior pieces red for a two-tone look inside. Purists, avert your eyes. 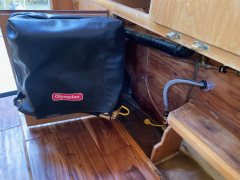 Rebuilding the front wall: Bought the nicest 3/4 inch marine ply I could find, traced out the roof. I didn't get this quite right as the front wall turned out to be a tiny bit too tall - oh well. 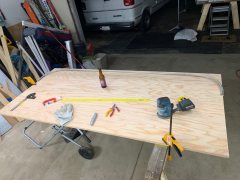 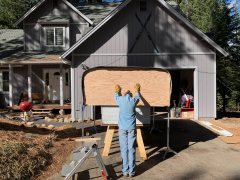 New wall basically just bolts onto the front structural bulkhead with some large bolts (6, not just 2 as in the picture). I reused the tilting vent window, and bought a vintage camper window from ebay for the main window. 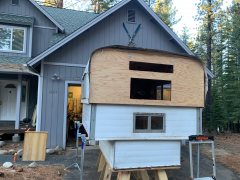 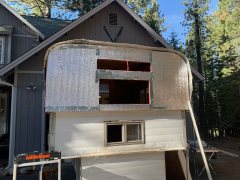 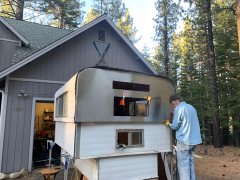 Thin modern insulation went on top of the new wall - this was what I found was the case on the original very front short wall of the cabover section, and what I think the factory did for the rear wall as well. I brought a piece of aluminum to a local metal shop to order a new sheet for the front skin. They could have imprinted the subtle creases that all Alaskan Campers have in the aluminum skin but I cheaped out. New wall wasn't going to match anyways. I think we went with 22 gauge aluminum, it was a bit thicker than original, could have been thinner.

The sidewall and roof aluminum wraps on to the front of the new front wall. It's secured by tacks, which are then covered by butyl tape and the screwed on edge-threshold-gutter. I reused the original front gutter, and then used aluminum strips below that. 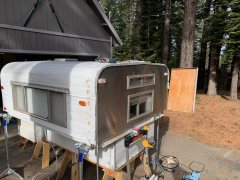 Essentially that is it. During this process my Dad, phd electrical engineer, took several weeks to figure out the messed up wiring, which had been modified at various stages by the previous owners. It now plugs into the truck's 7-way trailer socket, new LED marker lights, porch light, new fuses, inside lights replaced with soft LEDs. No inverter, charge controller, auxiliary battery - maybe later. 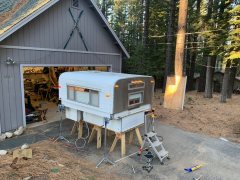 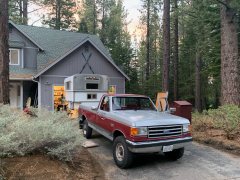 The camper survived (thrived even) this past winter in Wyoming and has been many places since. Would be nice to have a bit more space but I really don't miss the drawbacks of the cabover as it was. 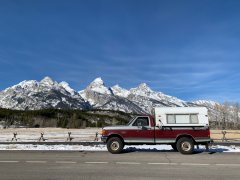 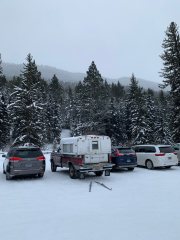 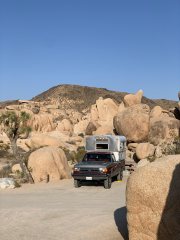 I hope this writeup is able to be used as a reference for anyone doing similar camper surgery, as many threads on this site as well as expeditionportal were very helpful. Would be happy to weigh in if anyone has any questions. It was very daunting going into this project but in the end, there were no major roadblocks - the camper is just made out of wood and aluminum, and mine was in such poor shape that I couldn't have made it any worse. If I had more time I would have rebuilt the wood under the side windows, I still need to replace the original upholstery, might paint the thing - the projects continue!

Good story, and the new camper looks great. You may yet need to go into the upper shell framing. One drawback to the Alaskan design is that condensation forms inside the aluminum and runs down to the bottom, so they are prone to rot in that area (too bad there are no drains for the condensation). However, not too challenging, given what you've done already.

Nice job on that camper!

Back to Alaskan Camper Discussions

Also tagged with one or more of these keywords: alaskan camper