5 replies to this topic

I recently bought a Palomino B500 (for very cheap) that needs quite a bit of work. The rainy PNW has not been good for the OSB Palomino seems to love so much. 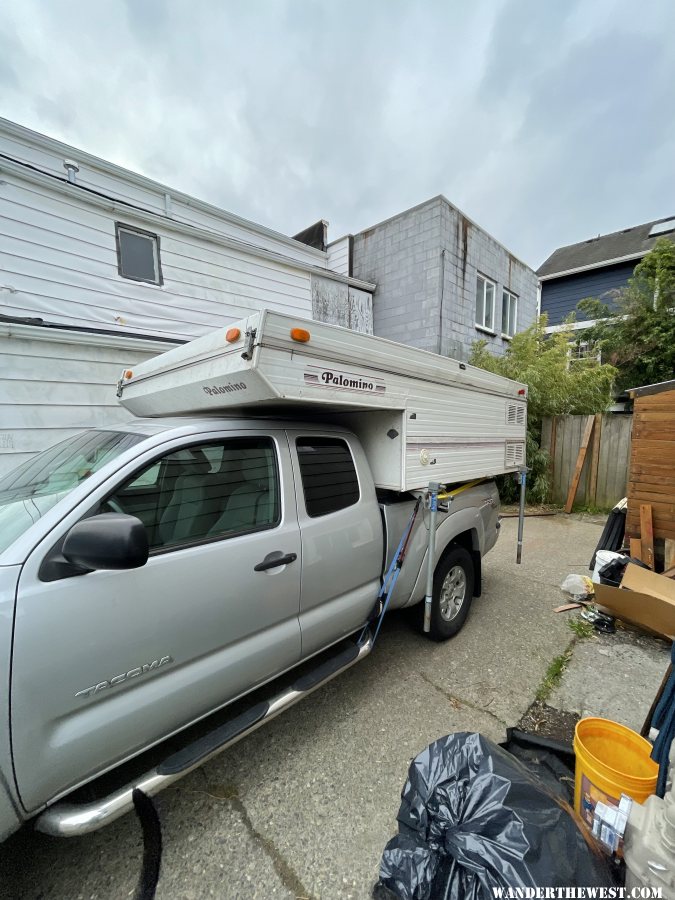 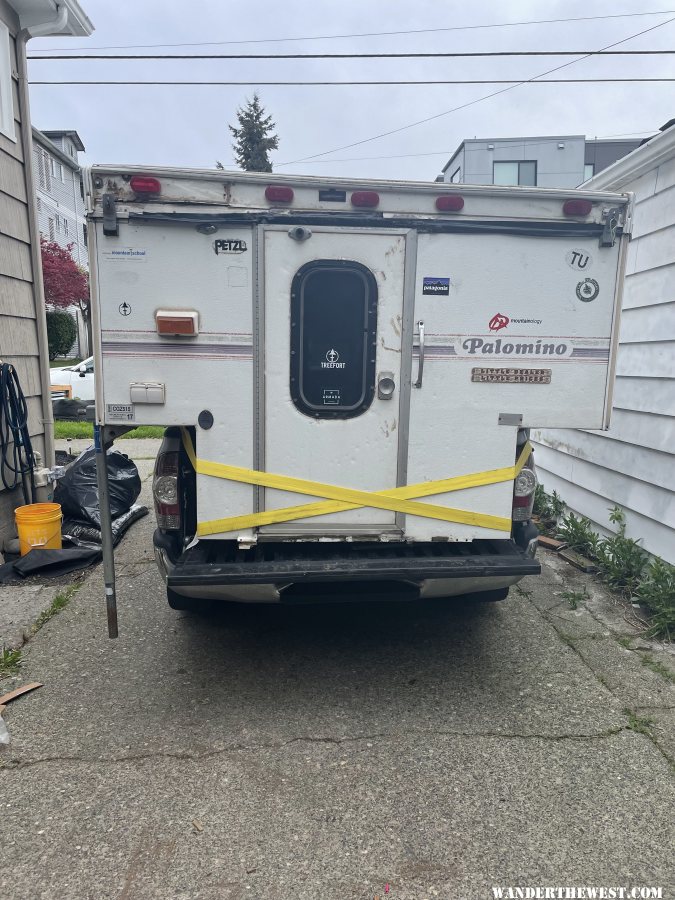 As you can see the torsion bars in the Heco lift system have started to rip the brackets out of the rotten roof boards so that'll need to be addressed.

Interior is pretty dated, basically completely original with some paint. 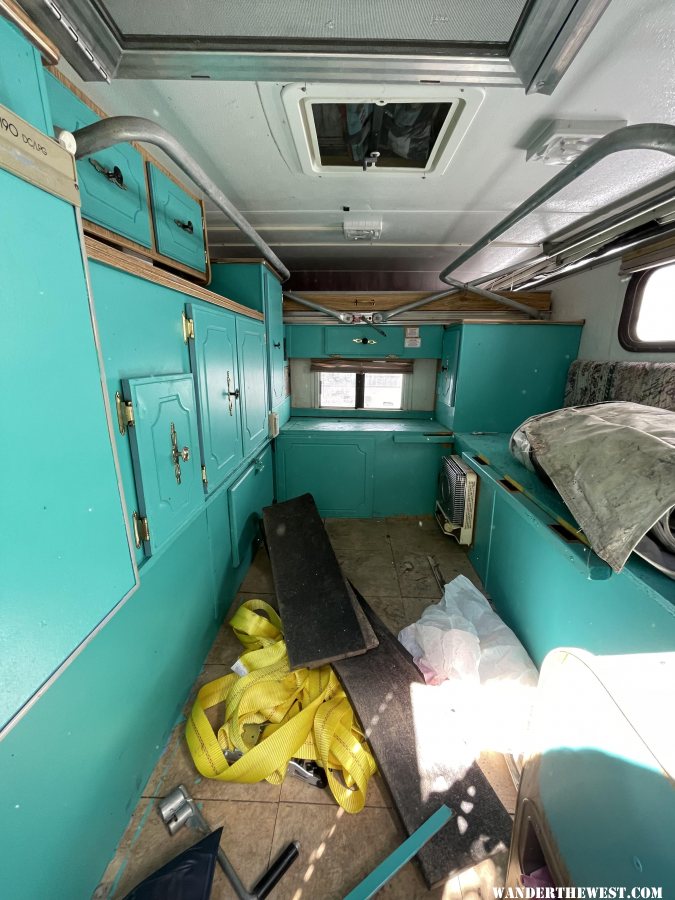 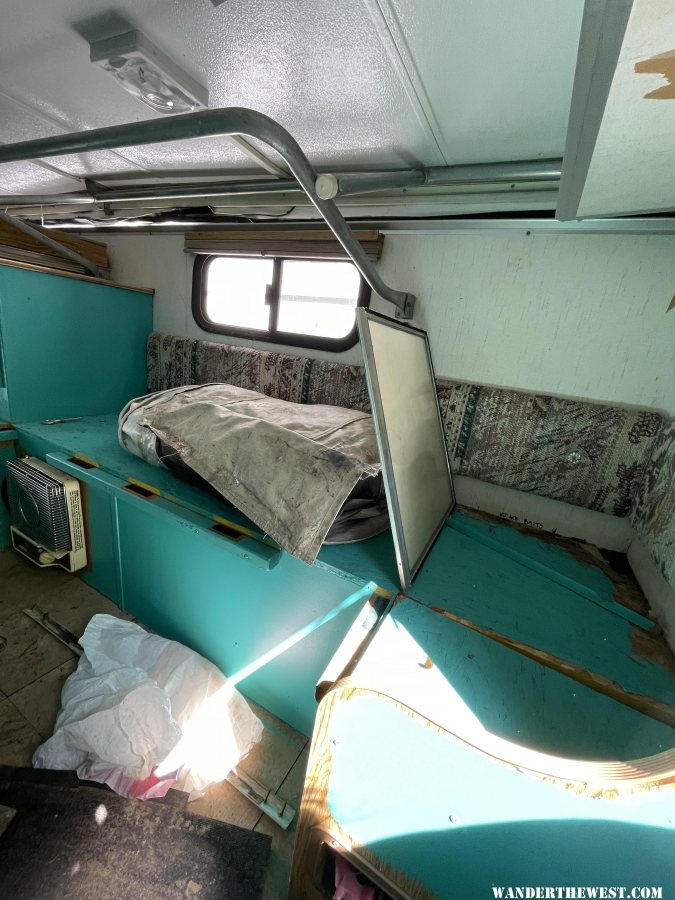 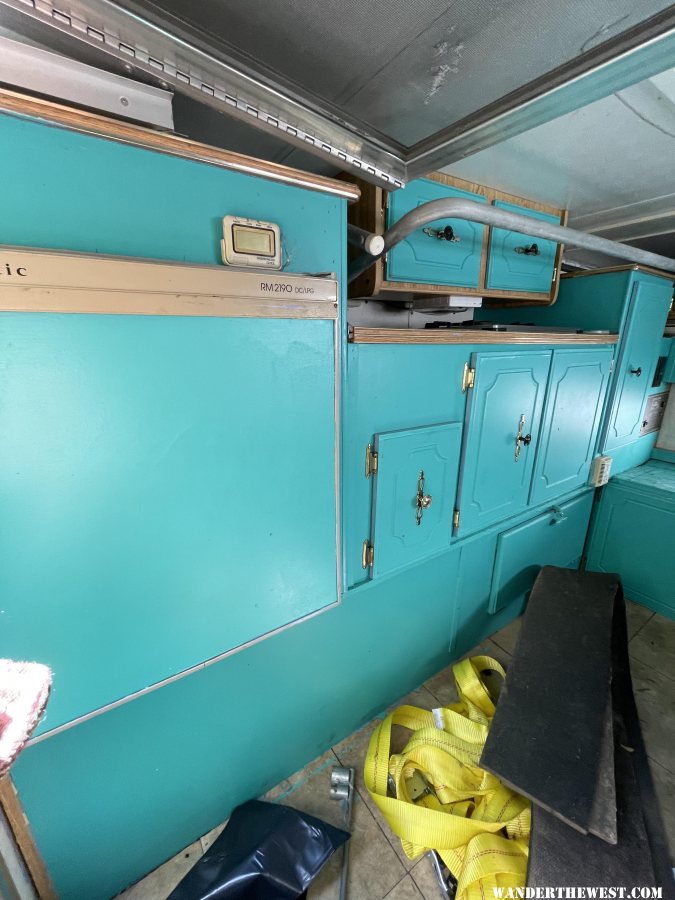 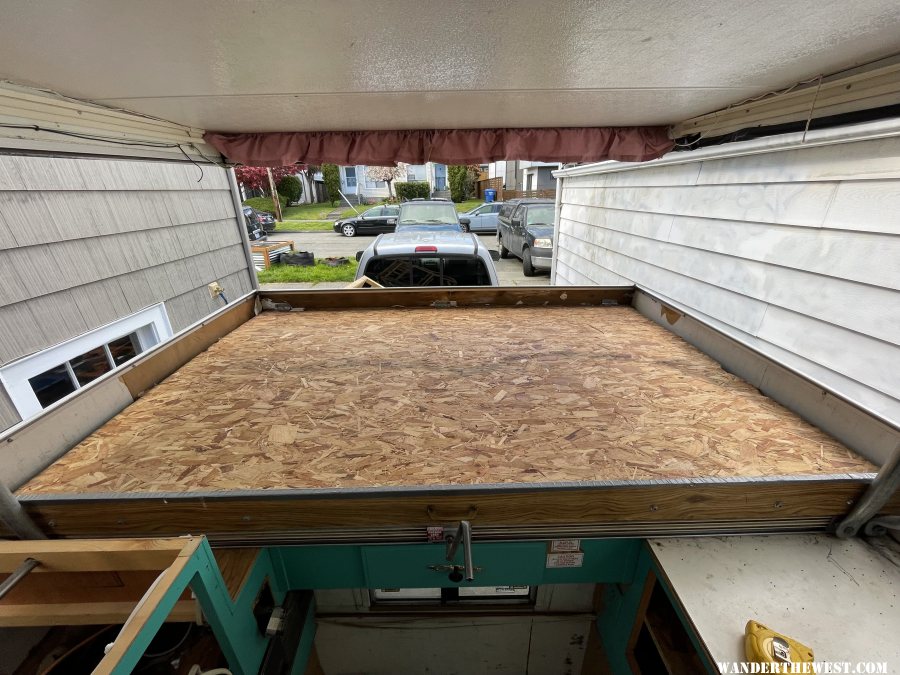 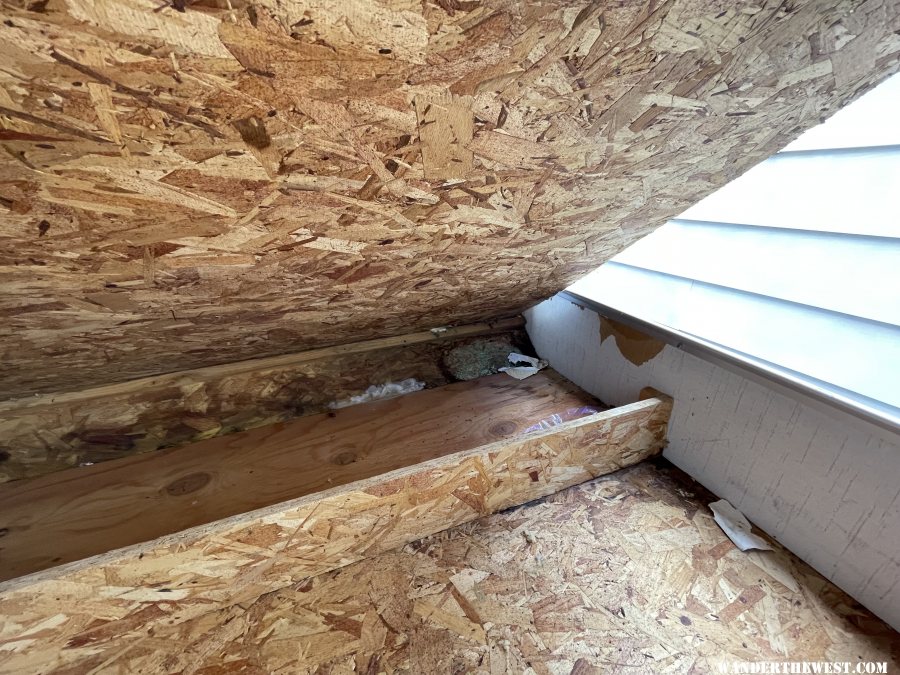 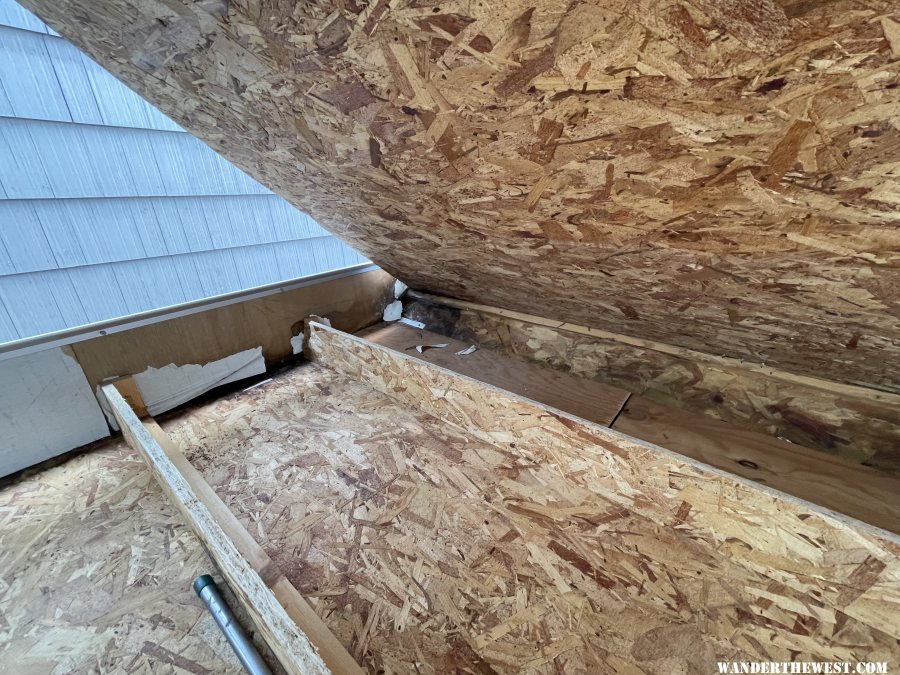 The front of the over cab area is rotten/eaten by a rodent so that will be replaced. Floor pack has more rotten OSB both on the center section and on the sides. Interior will be gutted and replaced, as well as all the appliances. I've done some of this already so i'll post that next.

First up was the center floor pack section that way I didn't fall through will working on it. I started by removing all the staples holding the siding to the bottom, then removing all the screws. After some light prying and removing the screws I had forgotten, it came right off. 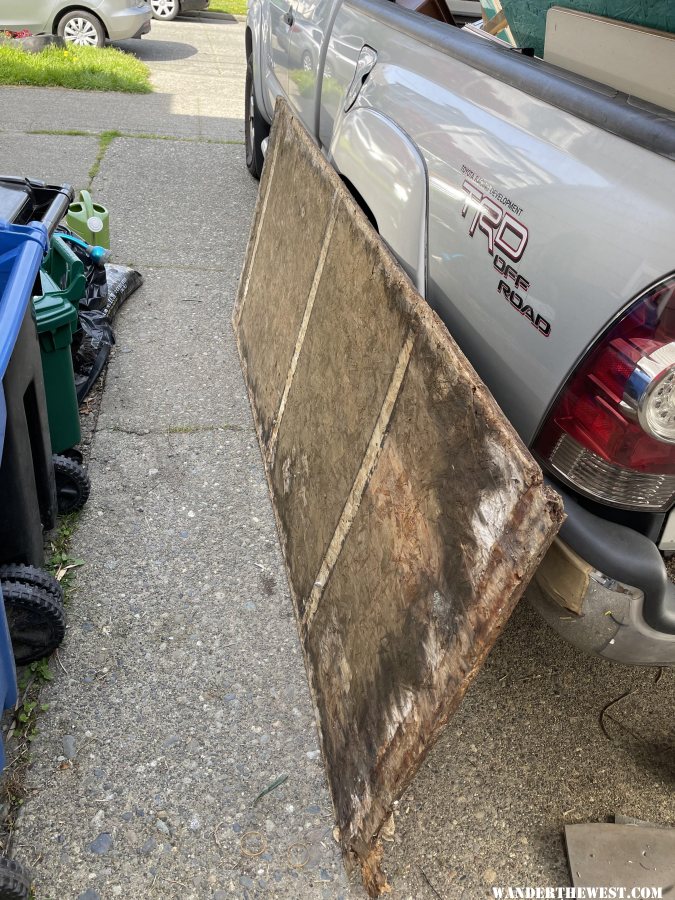 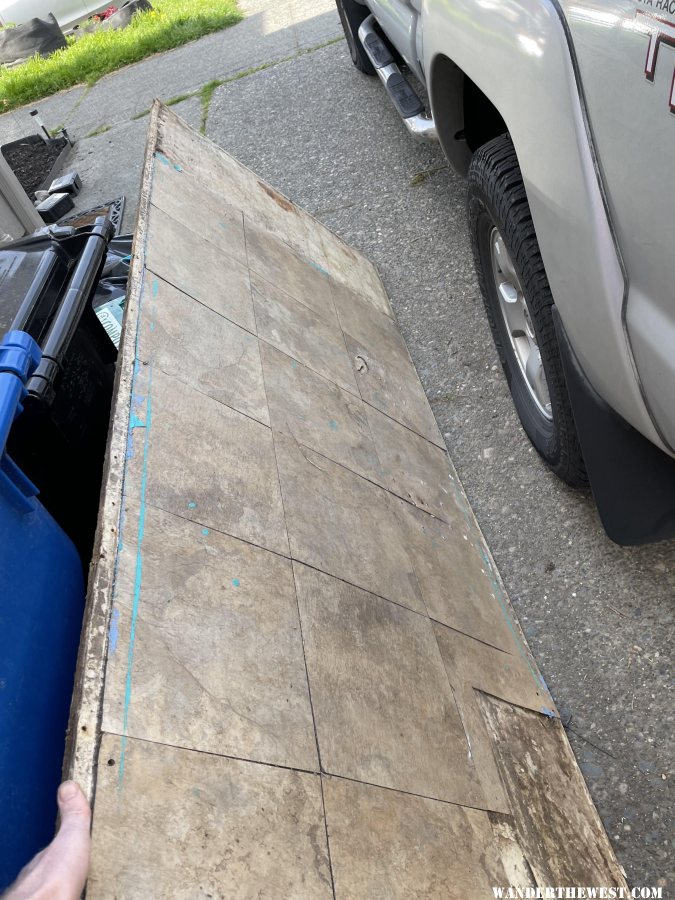 Two layers of Linoleum! Funny how the first layer it extends to the edges, under the walls. I guess it saves some time to apply it before the floor is attached to the camper.

New floor is 3/4" CDX primed with some kilz in case I paint it. I used some coated exterior construction screws and titebond 3 to attach to the walls. 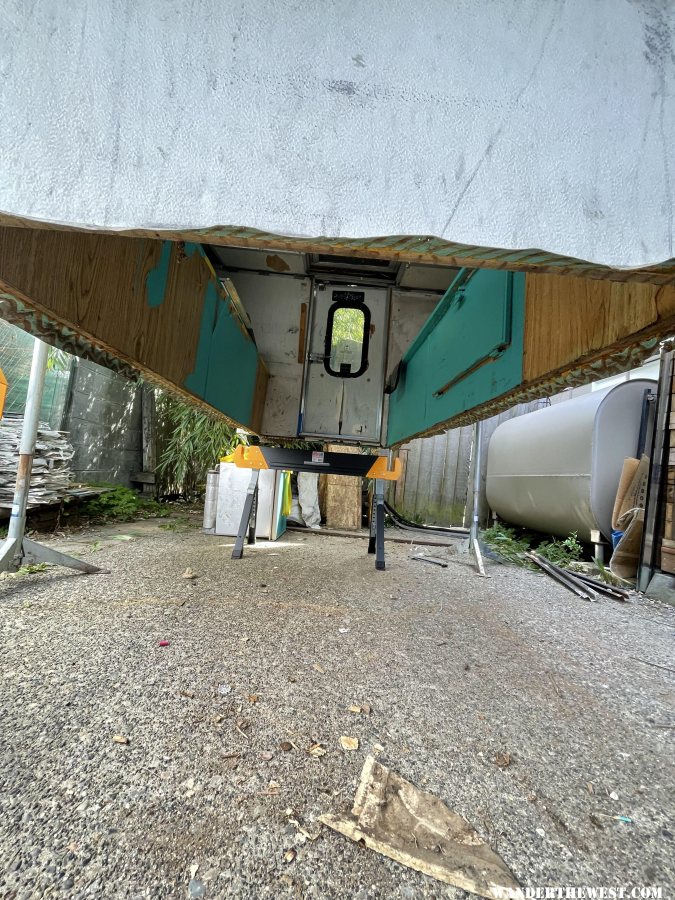 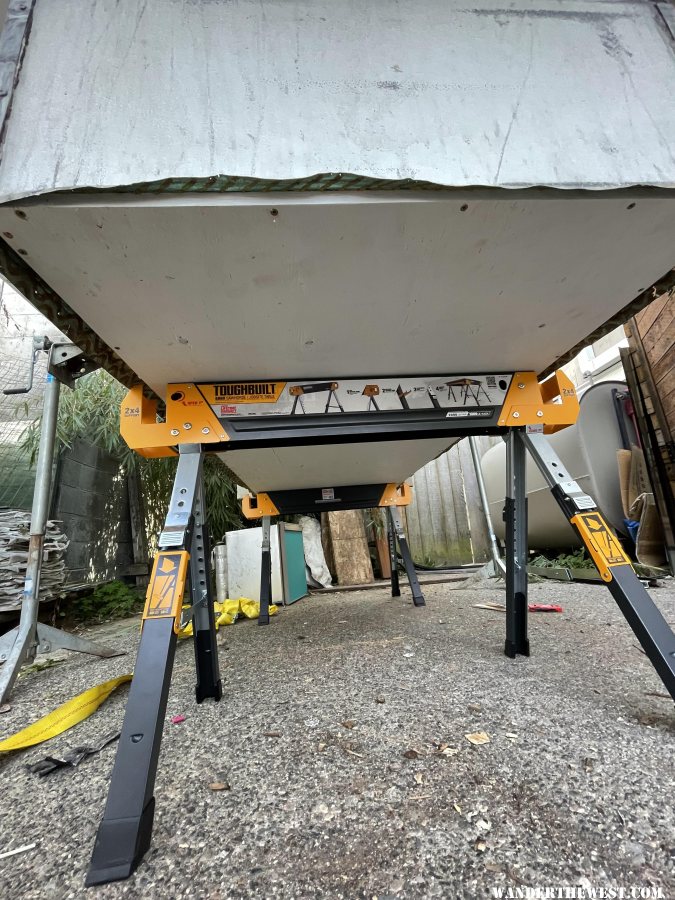 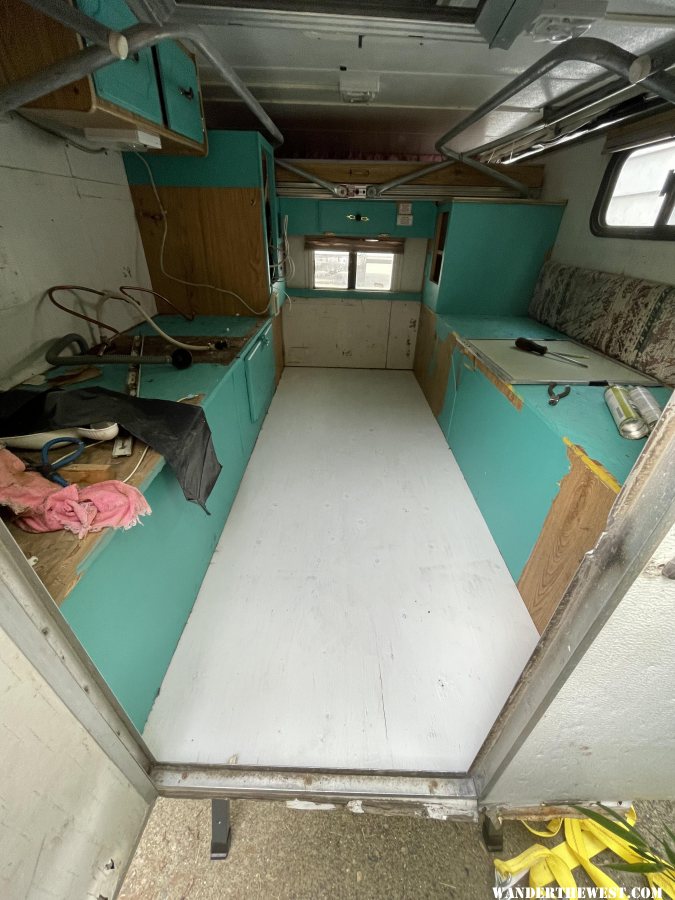 You can also see at this stage most of the cabinets have been removed and all the appliances.

I've since removed the rest of the cabinets and begun removing the staples attaching the siding to the underside of the floor pack sections on the sides. Those will most likely get replaced next. After that I'm thinking the roof rebuild which I will detach from the camper to make things easier. One major thing I need to figure out roof lifting system. I'm thinking of ditching the Heco system so I can have a wider bed using a panel that slides out like in Four Wheel campers. If I got rid of the Heco I think I'd go with something similar to the Four Wheel Camper lift system as well with gas struts and some type of supports, probably like the metal tubing that's already there and like was done here:

I can't seem to find anyone else that has removed a Heco lift and put in another system. Has anyone done this?

Next up was replacing the upper portion of the floor pack since that had some water damage. 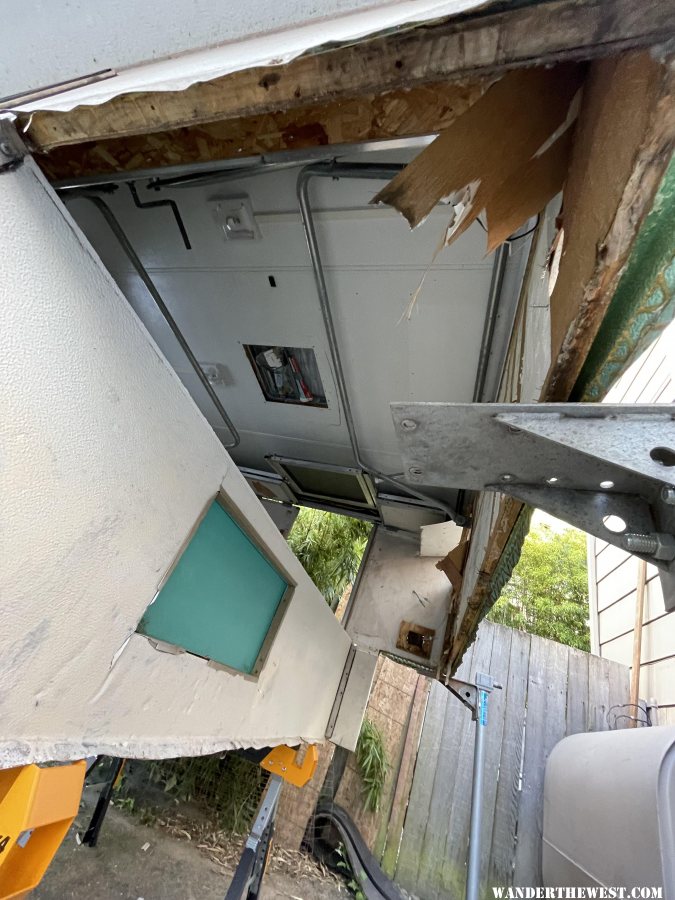 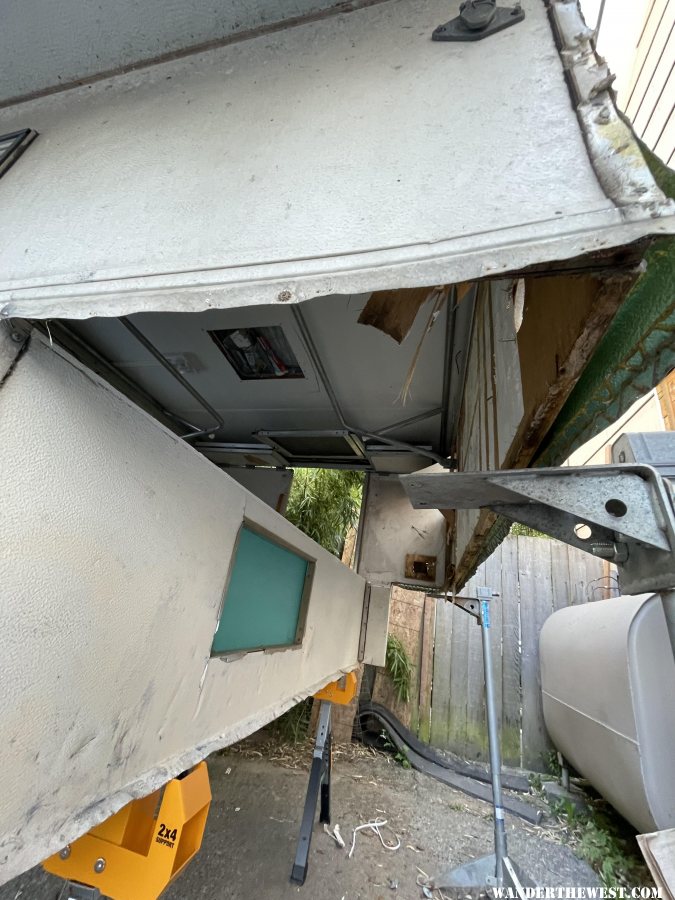 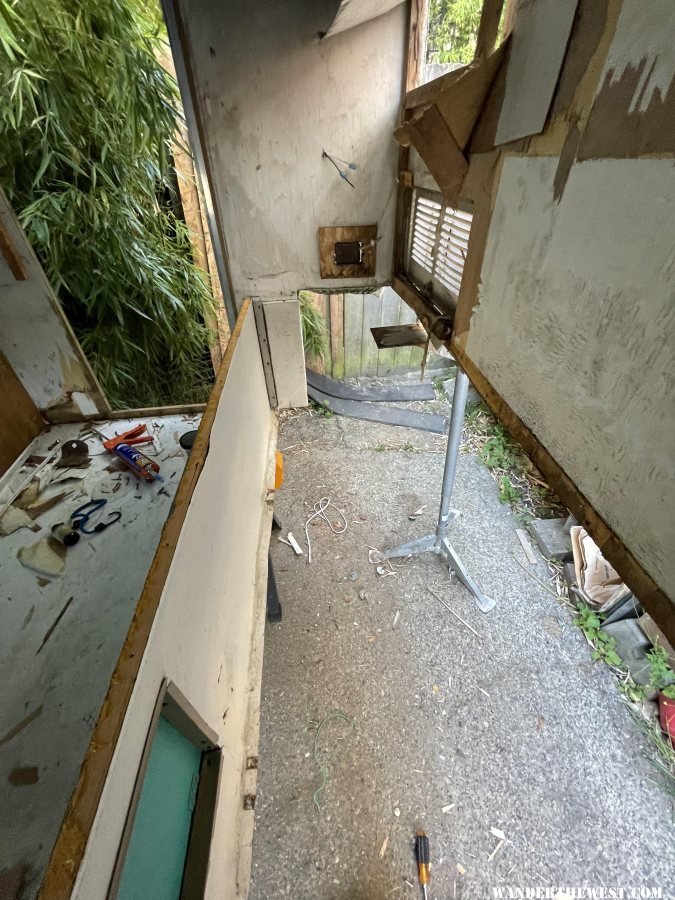 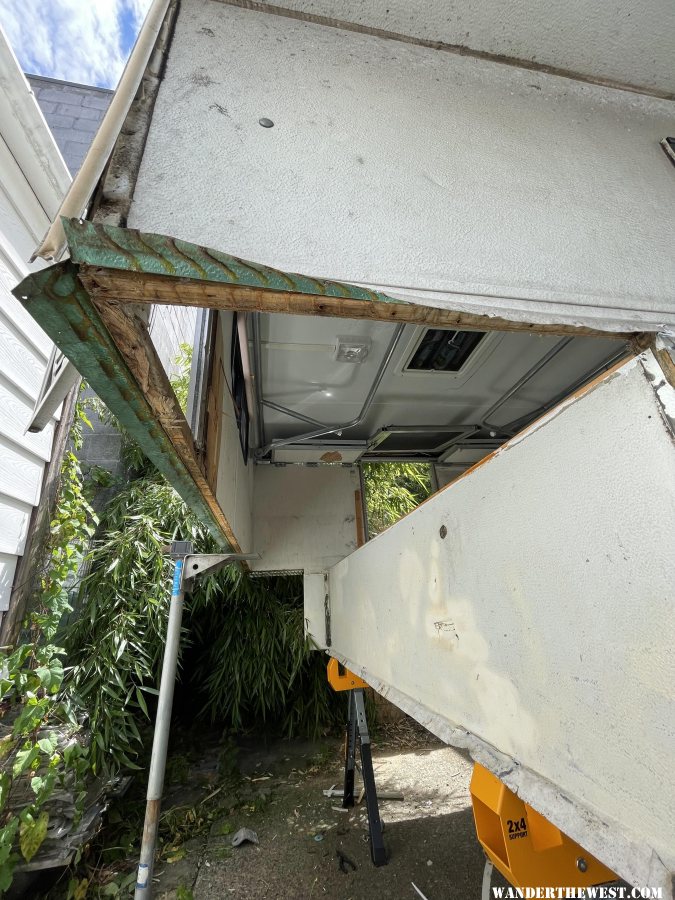 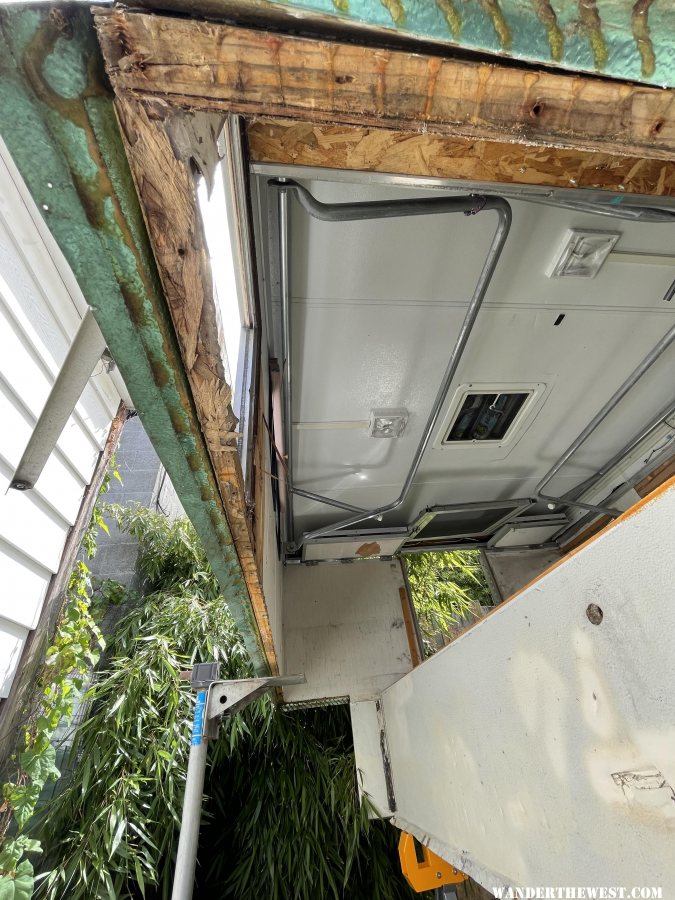 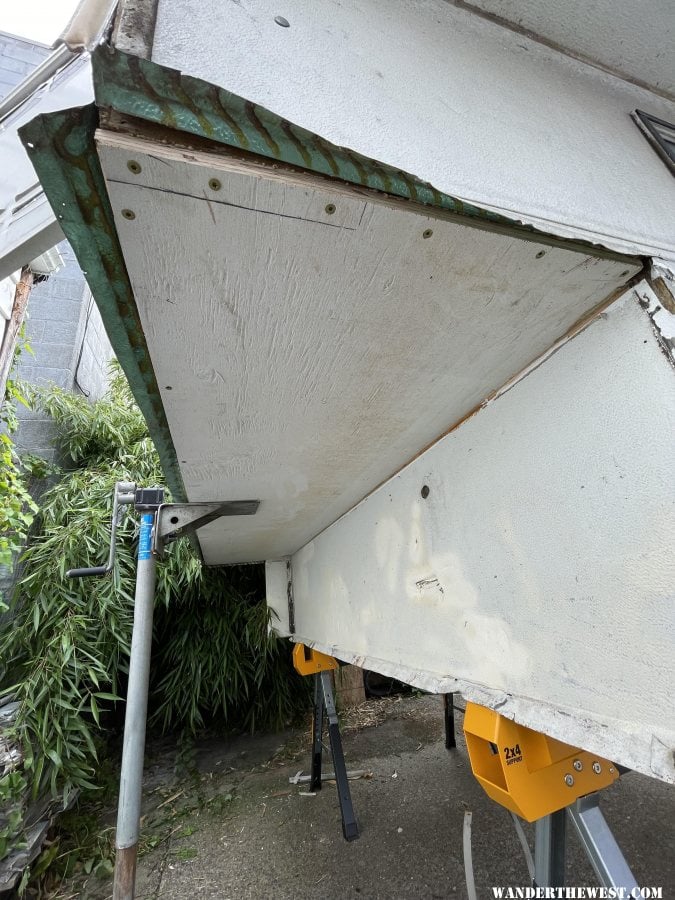 I used 5/8" CDX attached with liquid nails and exterior structural screws. The new plywood was way lighter than the old OSB which had absorbed quite a bit of water over the years. Should be a much sturdier mounting surface for the jacks and tie downs. Surprisingly the 1x2s on the wall where the floor pack mounted was in pretty good condition.

I'm now prepping to rebuild the roof which should be interesting.... 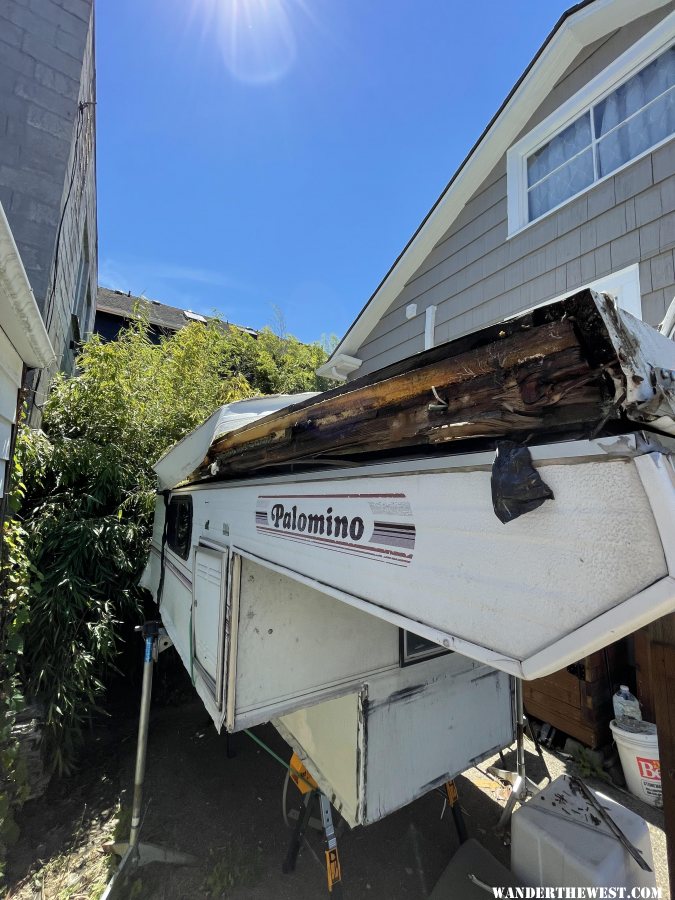 The passenger side is missing the lower trim piece on the roof which I've been having trouble finding at the local RV supply stores. I may need to get creative. The old wood is so rotten its hard to figure out how it was made but it appears it's two pieces of wood, a curved 1x2 to match the top and a straight piece on the bottom portion. There's a slight gap with some spray foam to fill the gap. I think I'll just go with one solid piece. Dreading the roof rebuild....

Thought over the roof rebuild for a while and realized it would be easier and best to just rebuild the roof from scratch. I took couple measurements and started removing the old roof. There's quite a few posts here on how to remove a heco lift system such as this one: https://www.wanderth...n-bars-summary/

After a friend and I got the roof off i just cut it up with a reciprocating saw and took it to the dump. The roof is just 3/4" styrofoam with 1x3s around the perimeter 2 1x3s running left to right and aluminum skins on the top and bottom. 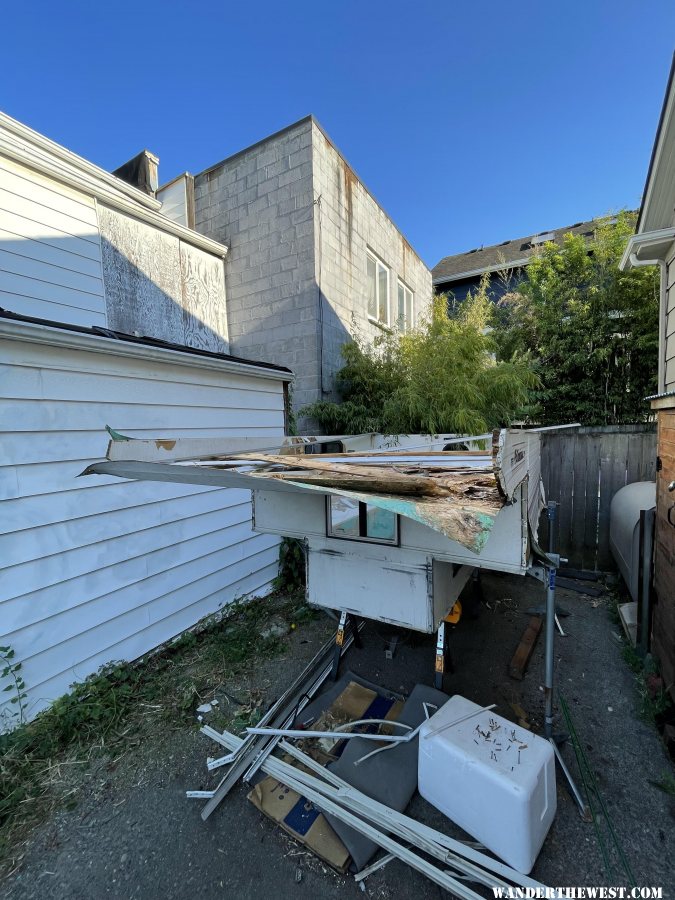 For the new roof the frame around the perimeter will be 3/4" plywood spliced together to make it 11' long with 2-3 1" aluminum square tube cross members and 1" XPS 25psi compression strength foam between. Then I'll glass both sides, the top will be 2 layers of 6oz glass, inside will be 1 layer of 6oz glass all laminated with marine epoxy. I make surfboards for fun so I figured this should be the easiest and best construction. Maybe not the cheapest though...

Once I had the roof off I decided it would be the right time to rebuild the bed overhang since the heco gears would need to be removed to do so. The OSB they used was so rotten and so well adhered to the aluminum skin that it was impossible to get off. After a few hours of scraping with a heat gun solvents I decided it would be easier to also glass this too and toss out the old aluminum skin.

More to come on the roof and the bed.

good luck with this build. i wonder if u thought of just building a pop up from scratch ??   you seem to have some skills !

Back to Hallmark and Other Brands