46 replies to this topic

The Ski3piners and the Barking Spiders undertook the project of building our own Arctic – Cold Weather Packs.

Much information we got through searching the forum posts here although photos of the finished product were hard to come by. I found four small photos on FWC’s website which I cannot find now to provide a link for you.

Many thanks to Marty at ATC for answering my questions and happily providing much helpful information. As always, the guys at ATC are great! I will provide photos and details here but not a complete set of directions. You will have to do your own measurements, layout, and assessment of your own abilities to tackle this project. This post is meant only as an aid and all the possible disclaimers we can all think of apply.

As with other projects posted here, I expect that many will come up with suggestions for improvements both in materials and designs - great!

Here is the materials list and cost. This is the same for our old Ranger II and the Spiders’ Hawk. 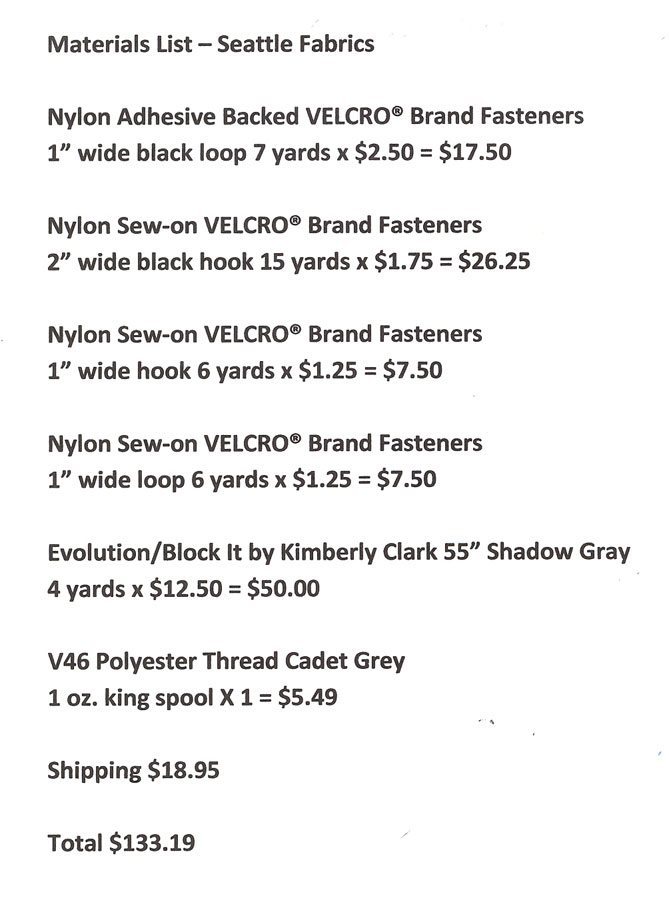 You will need a long straight edge, and backing board, and a proper rotary cutter. 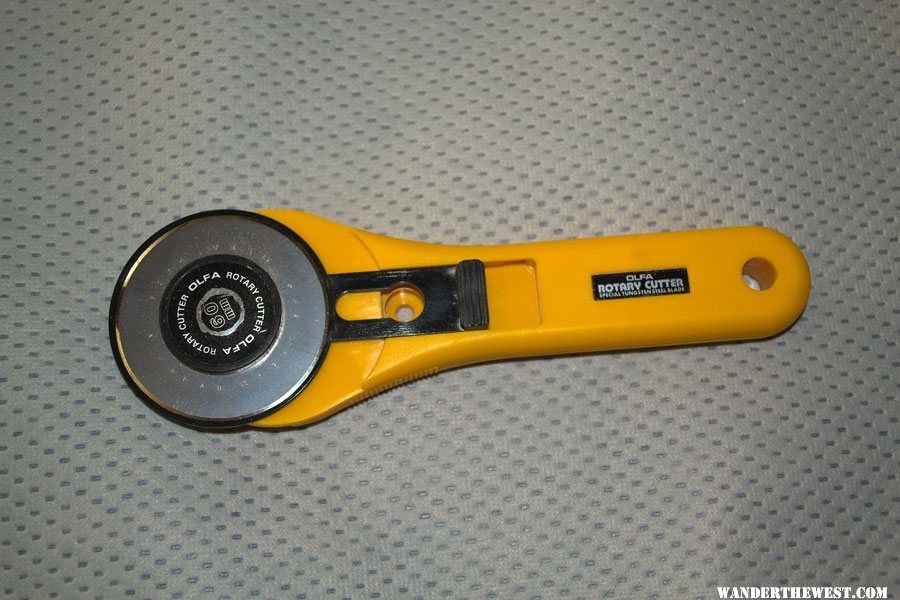 Mrs. Spider is the experienced sew machine operator in our group. It had been a long time since I had seen one in service! 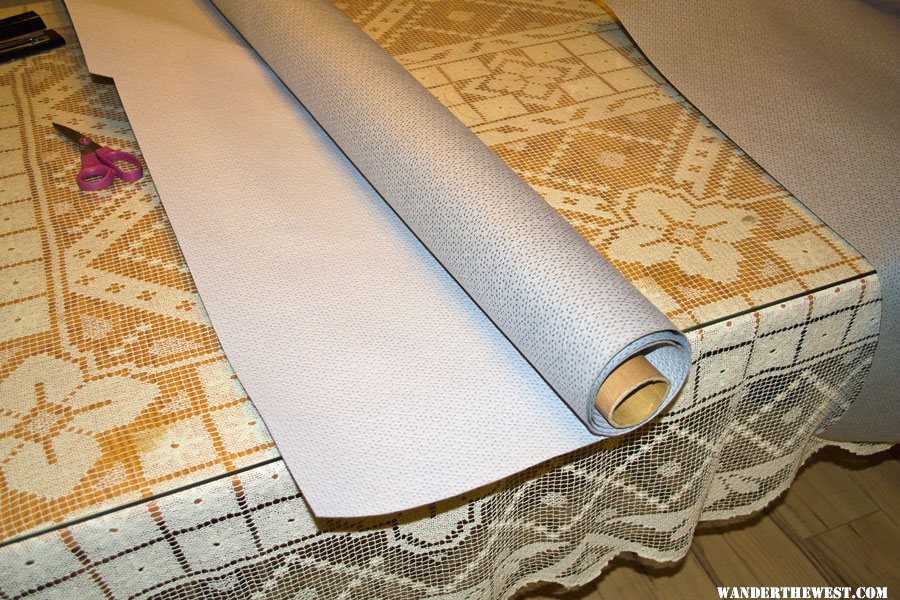 Although the info at Seattle Fabrics states 54” wide, it came 55” wide. This allowed a ¾” wide hem on both the top and bottom edges leaving an overall finished width of 26”, perfect! The vertical edges are not hemmed. The fabric has two sides, a brushed and one slightly smoother side. We put the smother side to the living space of the camper.

I should cover some terminology so we have a common language here. 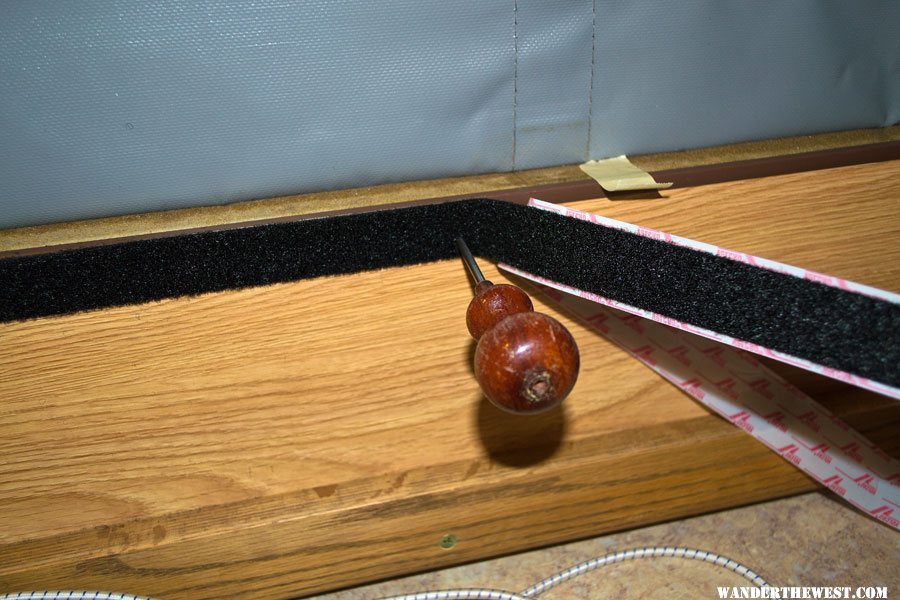 I elected to move along the edge and individually remove the hex head screws, find their hole with an awl, and then replace the screw. 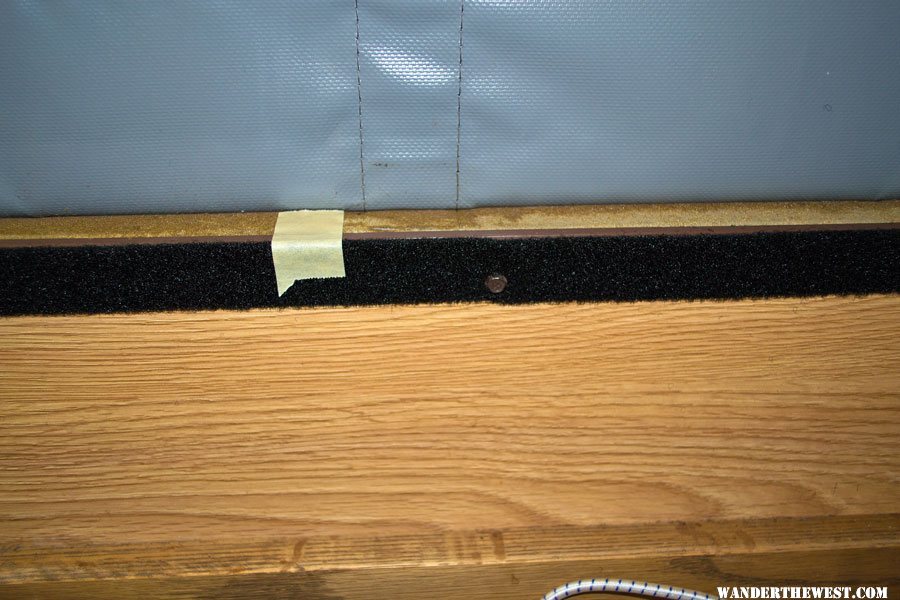 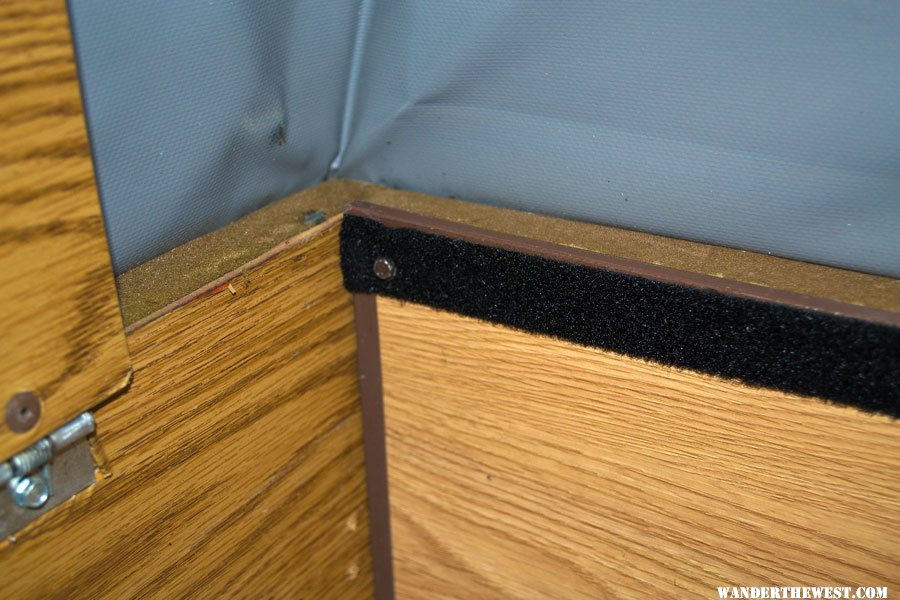 The arctic – cold weather pack is build in five panels, the center panel between the windows, the two window panels, and the back panel and the front panel. The front and back panels tuck behind your lift panel assemblies for the roof, but not too much to interfere with your sideliner attachment points behind the lift assemblies.

Our building process was cutting the fabric length wise down the center, cutting the individual panels, folding the hem and sewing on 2” hook Velcro along the interior bottom of each panel, sewing hook 1” hook Velcro to both outside vertical edges (length based on your needs) of the center panel and window sides of both the back and front panels, sewing 1” loop Velcro strips to the inside edges of all window panels, sewing the five panels together, folding the hem and sewing on 2”wide hook Velcro to interior top edge of assembled side, sewing on four 2” Velcro hook squares to outside top edge to hold window panels up in rolled position, and doing button holes for the four d rings on side liner window flaps.

This is probably getting confusing. Pictures will help.

Sewing on the bottom 2” wide Velcro hook strip. We folded over and pinned the ¾” hem, stapled the Velcro in place, sewed the bottom seam pulling pins along the way, sewed the top seam, and then pulled the staples. 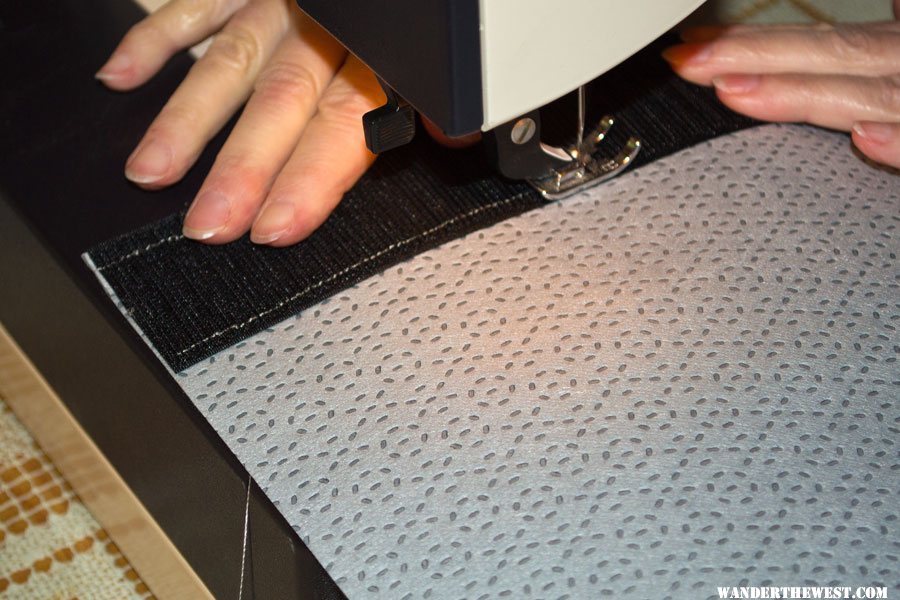 Here the panels are completed. 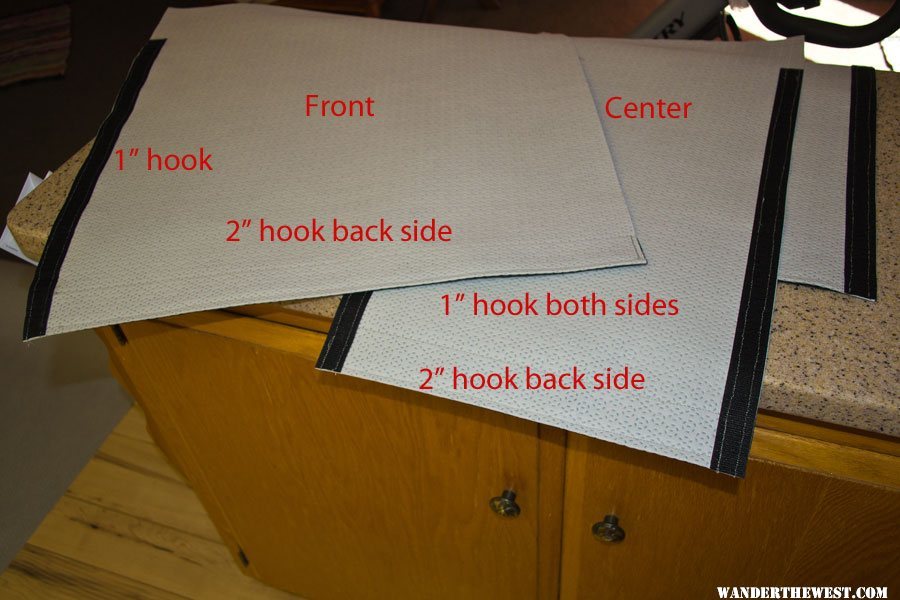 The hard part was sewing the panels together. 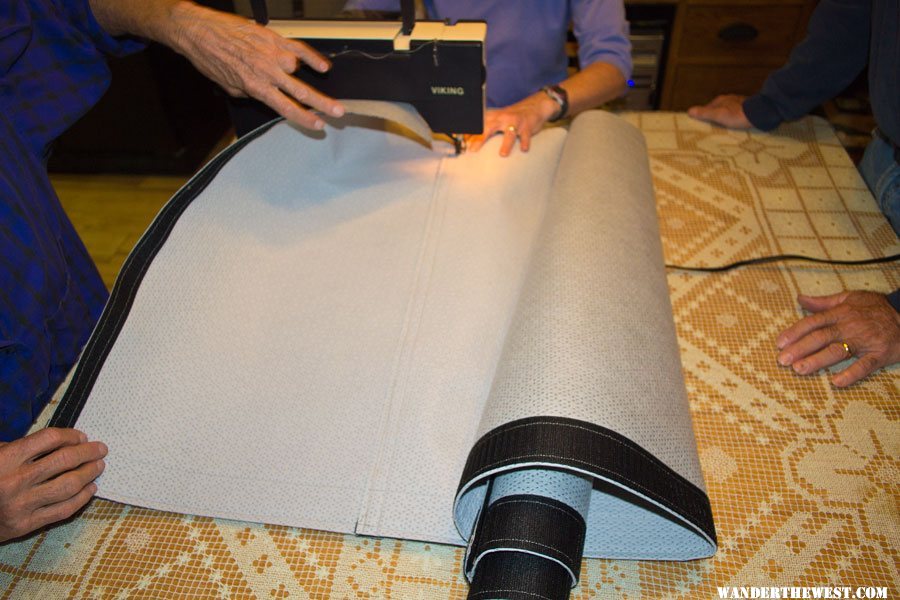 We kept the assembly square by lining the panel bottom edges up along the edge of our table top, overlapping the Velcro, and then sewing down from the top with the seam end across the top of both vertical Velcro strips.

Here is the assembled panels (interior view). The top edge hem is being folded and pinned with 2” hook Velcro strip ready to be temporarily stapled in place. 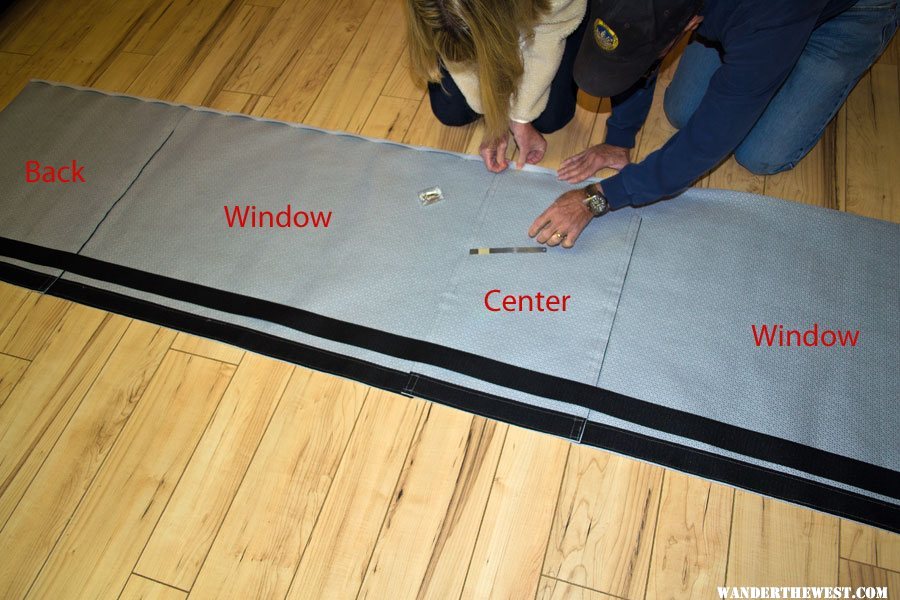 Here is a finished button hole. 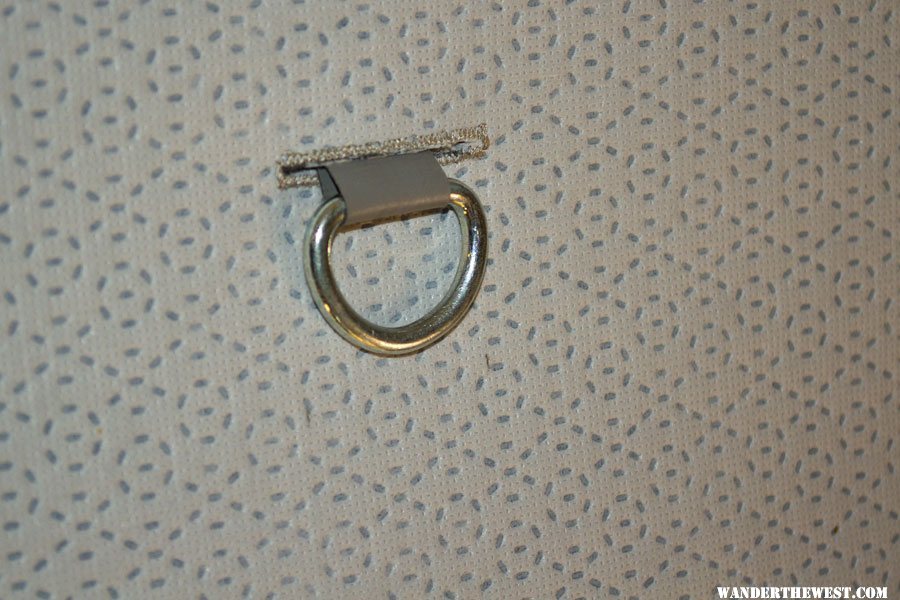 Taking a look at the finished product will probably help with questions about design and assembly. 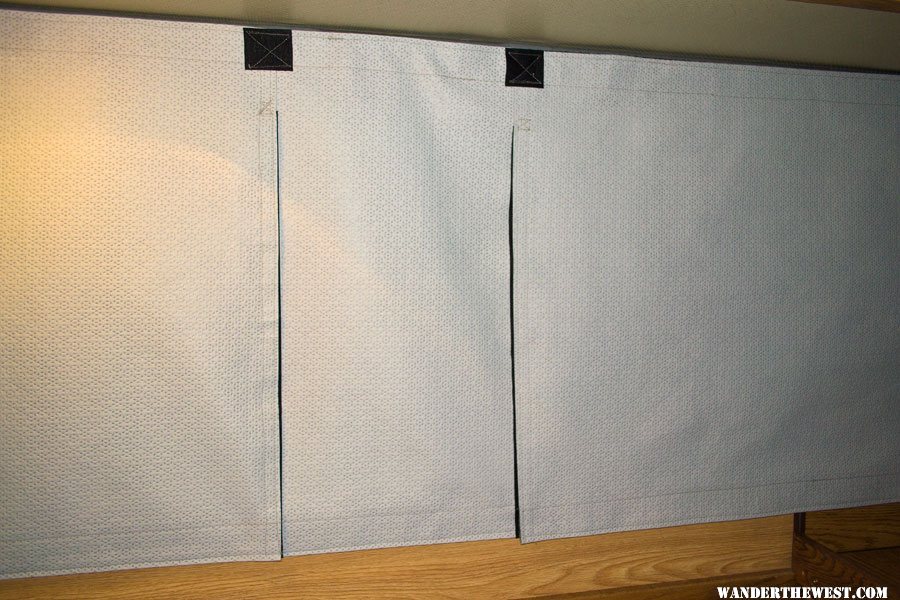 View to the front 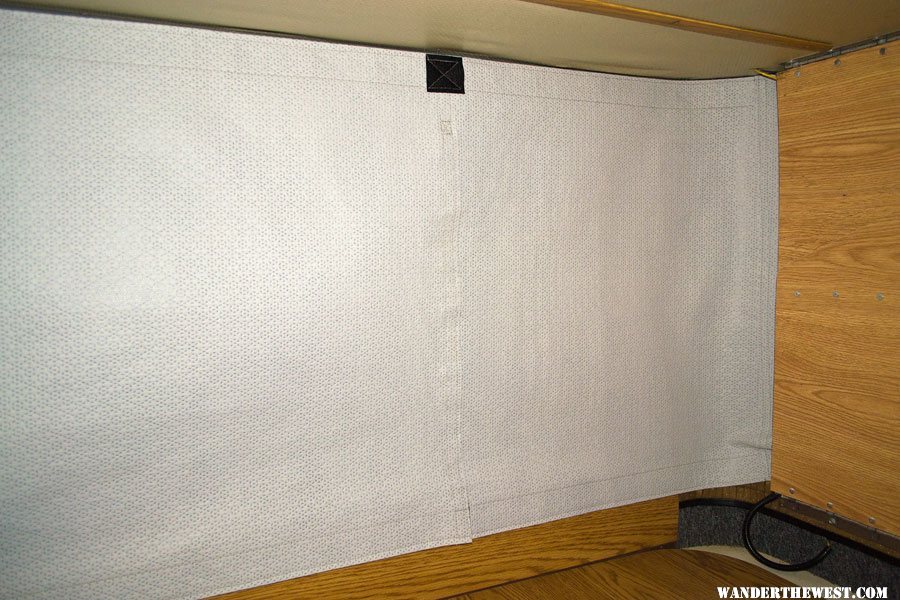 And view to the back 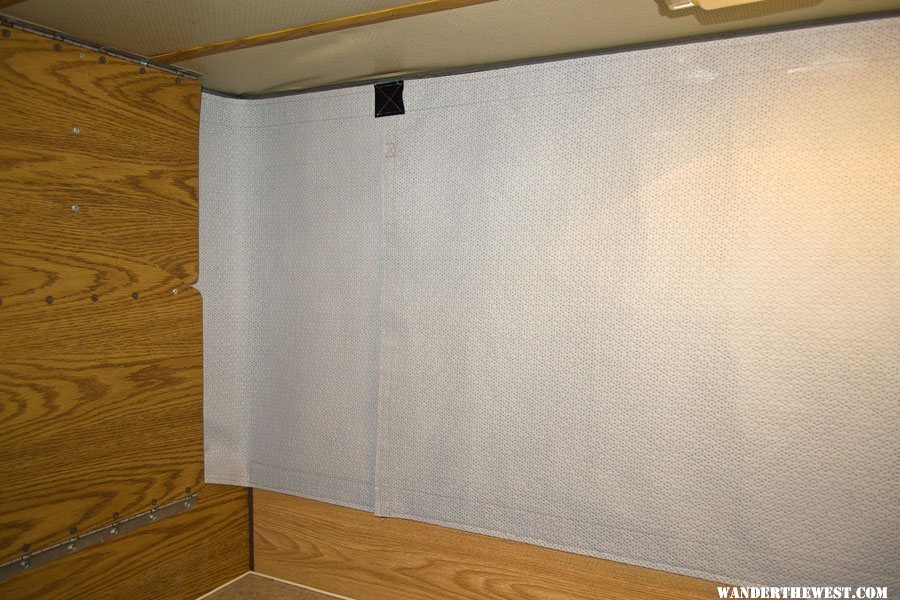 Window panel rolled and held up 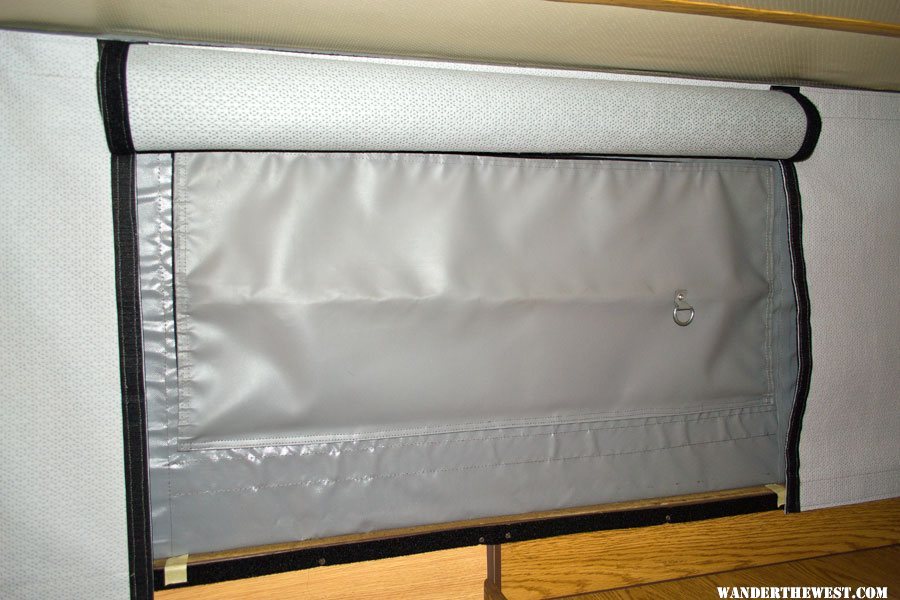 Arctic- Cold Weather Pack in place with all windows open 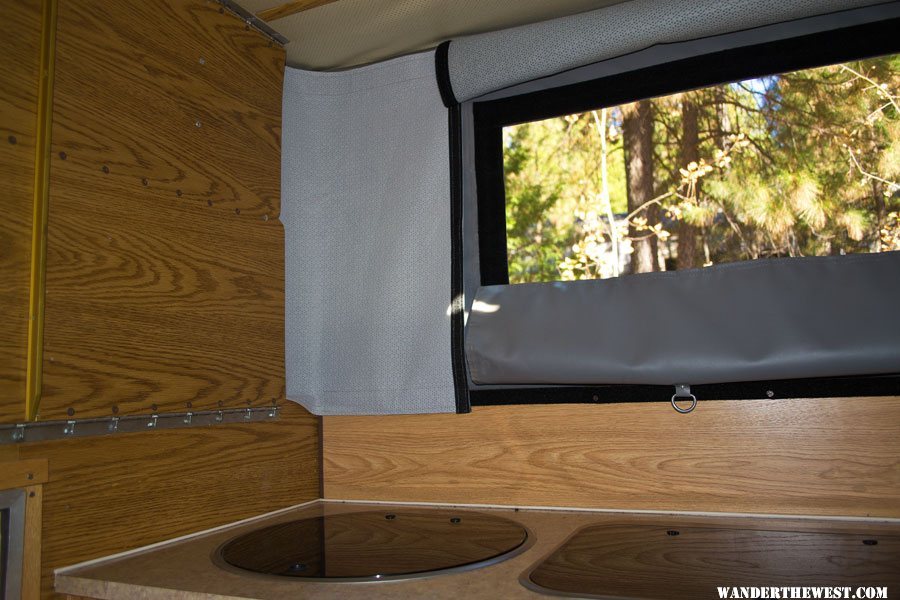 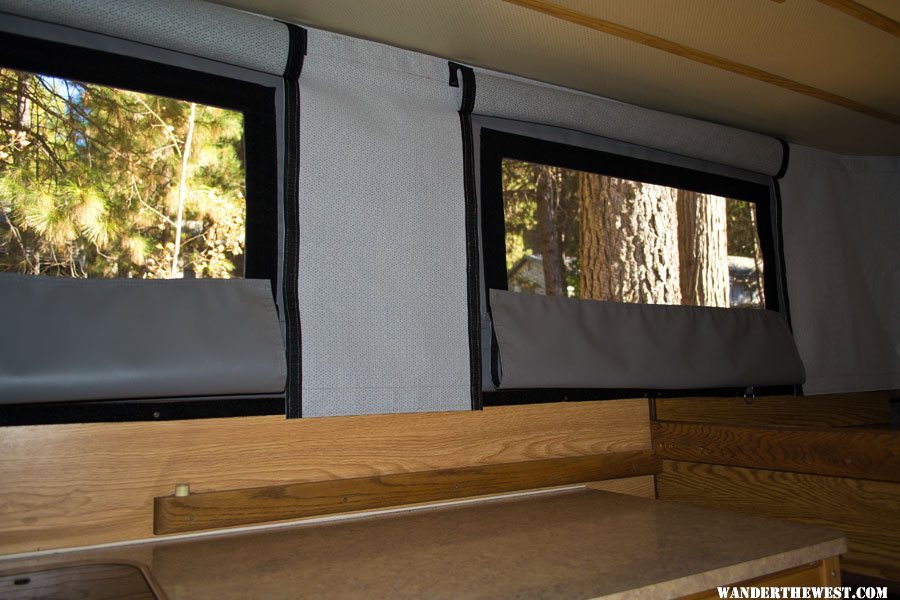 We decided on doing a more traditional cold weather pack as opposed to using reflectix as many here are using with good success because this pack can remain in place with the top lowered.

Here is the pack in place with the top lowered. 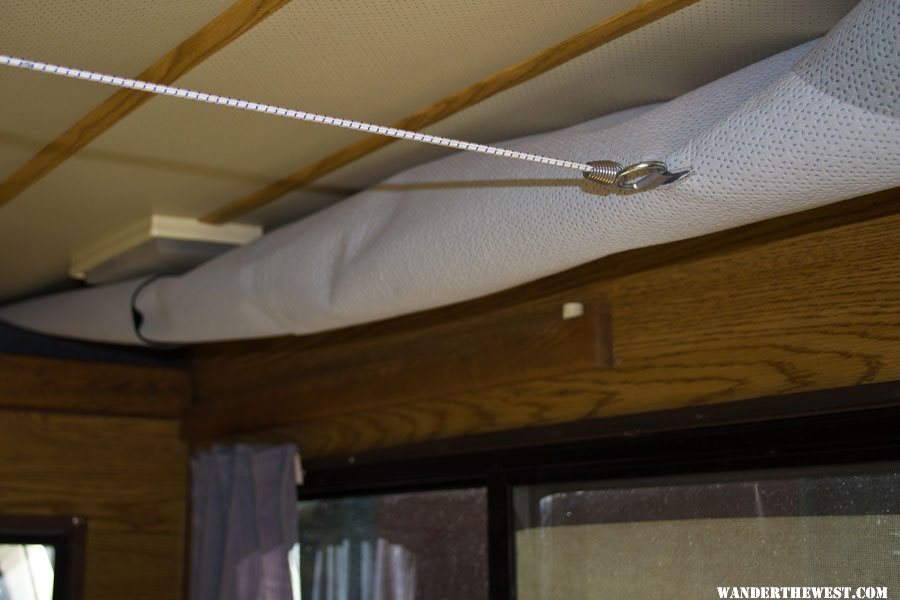 This did add a bit more bulk to the overall side liner assembly on the camper so I had to loosen up the latches a bit so as to not be too tight.

Time involved was starting just before noon on Saturday. This involved lots of thought along the lines of “how in the heck do we do this?!”One side was completed around 5:30. We broke for dinner and started around 6:15 and had the second side completed at 8:30, much less time. We had 4 people working and we organized an efficient assembly line.

We will be finishing up the Spiders arctic - cold weather pack this weekend.

Thanks, ski3pin -- very cool...and helpful!
I'm going to consider this, or a version of this, for myself. I always camp in the winter in cold places, so a better way to insulate is something I'm interested in.

My current insulating solution, Reflectix, is OK...but because I only have it attached at the top of the wall -- and because it's semi-rigid -- if the walls flex then gaps open between the bottom of the Reflectix allowing cold air to leak down from behind the Reflectix into the cabin.

I suppose construction would be considerably simpler if I didn't care about being able to open the windows with insulation in place...I may do a lazy-man's version.

Excellent workmanship and workwomenship & a great write up.
Looks like an exact match to mine from ATC.

If I may, my first time experience with the artic cold pack...

I was pleasantly surprised on our first Winter trip (before I had any interior components built into our Bobcat shell), how well that artic cold pack worked.

First night I forgot I stashed it in the back of the truck cab as an after thought on the way out of the garage. No heater and 27 F overnight (both inside and outside) in the shell brought back the memory of bringing the artic cold pack. I was glad Kathy, Penny the min-pin, and Pip the jack russell were under the covers with me (it was a wife & two small dog night). So, later in the morning I retrieved it from the truck cab and stowed, still in it's bag, in the camper for tonight (probably should have checked out how to install it in the daylight).

Around 9pm that night, as I put it up, Kathy asked what those black square patches at the top were for and, she being a quilter, why was the thing made in panels, instead of one long horizontal piece? Of course she was already snug and warm in the sleeping bag with the dogs and I was cold, so I said we'd figure it out in the morning and I jumped in.

Mucho better the next AM, still a low of 27 F outside when we got up, before the sun hit the camper, however, inside was just in the mid 50's, almost right for us. We did have the roof vents closed this time too.

Before we removed the artic cold pack, we discovered the interior window flaps and the method of rolling them up.

After we removed and stowed the artic cold pack, and after the sun has started to hit the fabric sides, Kathy asked if I had turned on the heater? What heater, I said? I was amazed again... that the fabric side walls when heated by the morning sun, actually heated the rest of the camper up. Glad I removed the artic cold pack when I did. Within about 40 minutes the inside was 70 F, warmer than outside.

I did experience a lot of moisture in the dead air space, without a heater, however, our extra towel took care of that before I dropped the top.

FYI: I've got a bunch of extra 14ga wire in red and black. Its a thick jacket 41strand wire (likely MTW wire) verse typical 19strand automotive wire. It has good flexibility but factor in the thick jacket. I'll ship out 100' coils for $18 (I can go 50' of ea for that too) if anyone is in need of wire.

Thanks ski3pin for the detailed writeup.

2012 Four Wheel Camper - The FWC Build
"If life was fair, Utah would be closer to home" DD

If I may, my first time experience with the artic cold pack...

Thanks for your arctic-pack impressions. I am trying to decide between ordering the factory setup or making my own insulation system.

2012 Four Wheel Camper - The FWC Build
"If life was fair, Utah would be closer to home" DD

Excellent workmanship, but I would expect nothing less from the 'pinners and 'barkers

We're of the reflectix tribe and have found condensation, sometimes ice, between our 'pack and the sideliner. We need to remove the reflectix to drop the top, but it's helpful to dry and ventilate. Sometimes we use a towel as mentioned above.