8 replies to this topic

Excuse to buy both fans

Long story short I saw a MaxxFan Deluxe in person a few days after I ordered a Fantastic Fan off the internet. You could say it was love at first sight, I like the idea of having a built in, low profile rain guard that allows me to be able to run the fan in the rain and while driving (allowing me to dry out the camper while on the road).  Living out of the camper for several months a year in the rainy Pacific Northwest make those two abilities very appealing. So I bought the MaxxFan. Then I found out that I could not return the Fantastic Fan so I figured out I would make the best of it and compare them side by side

Side by side comparison. 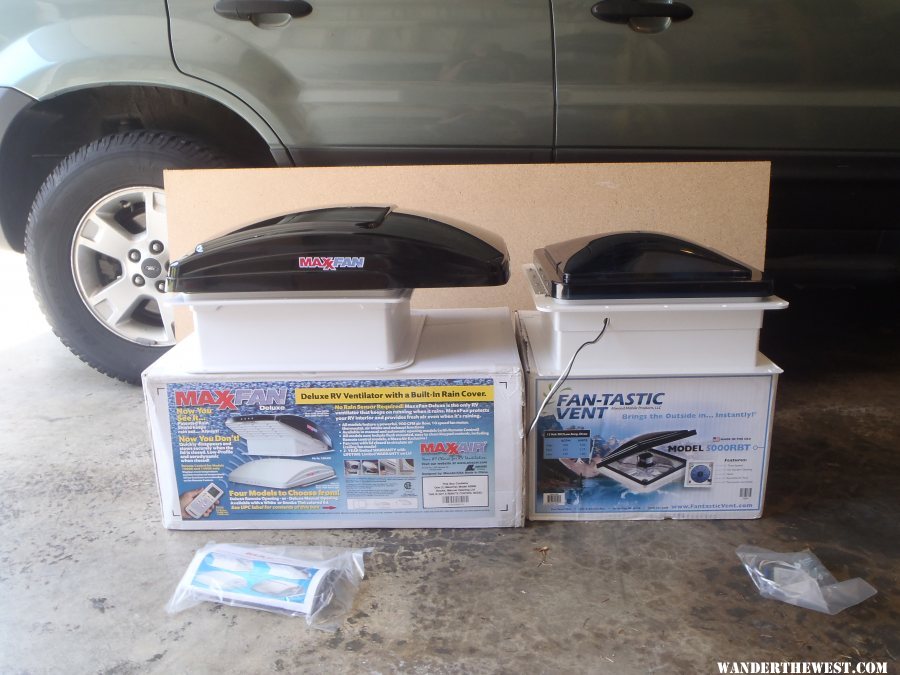 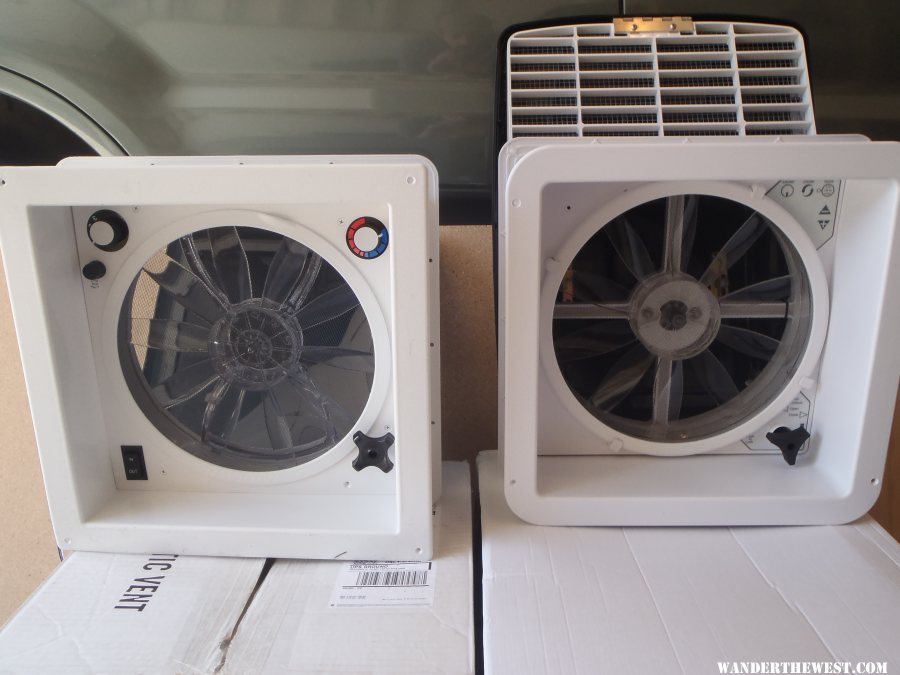 Note: The controls on the Fantastic Fan are dials whereas the MaxxFan are buttons. The thermostat on the MacxxFan is a button with a default stetting of 78*, to adjust this you hold the thermostat button while pressing the +/- buttons. Each press of the +/- button is one degree change and is marked by a beep. Kind of complicated considering the Fantastic fan is a color coded dial, but the MaxxFan does allow you to set an exact temperature. 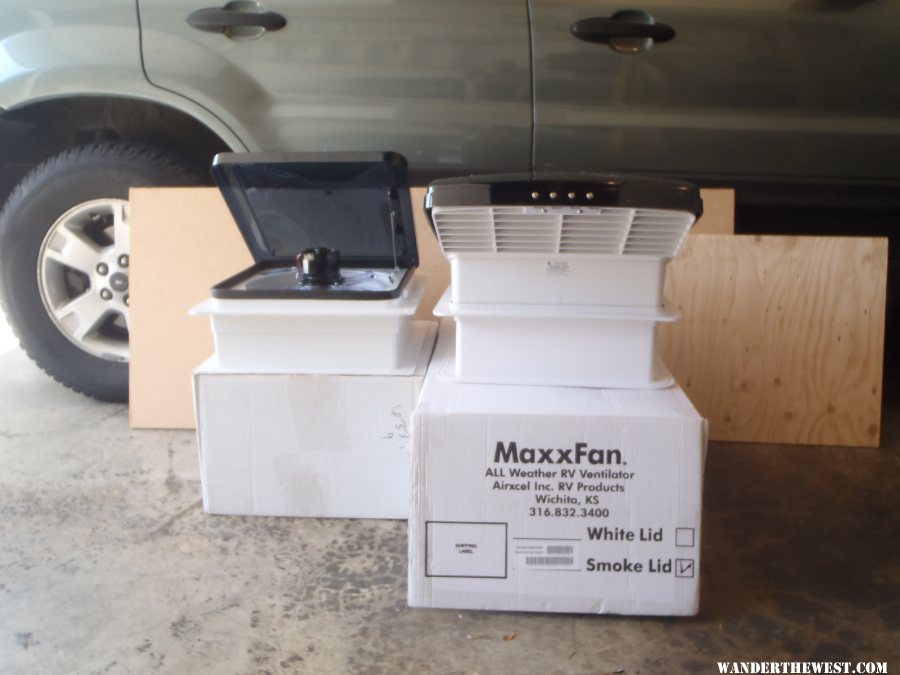 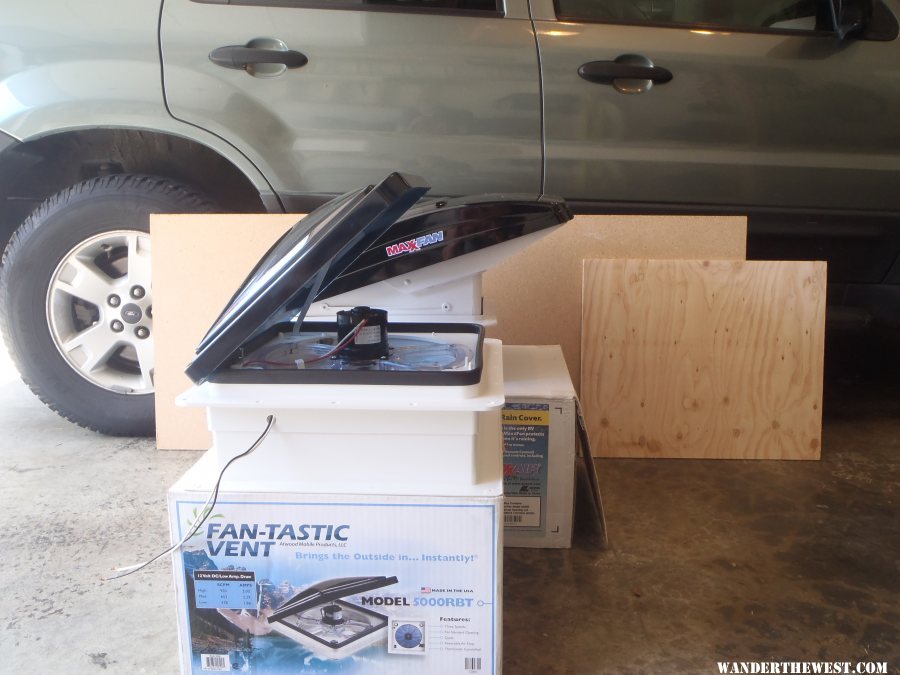 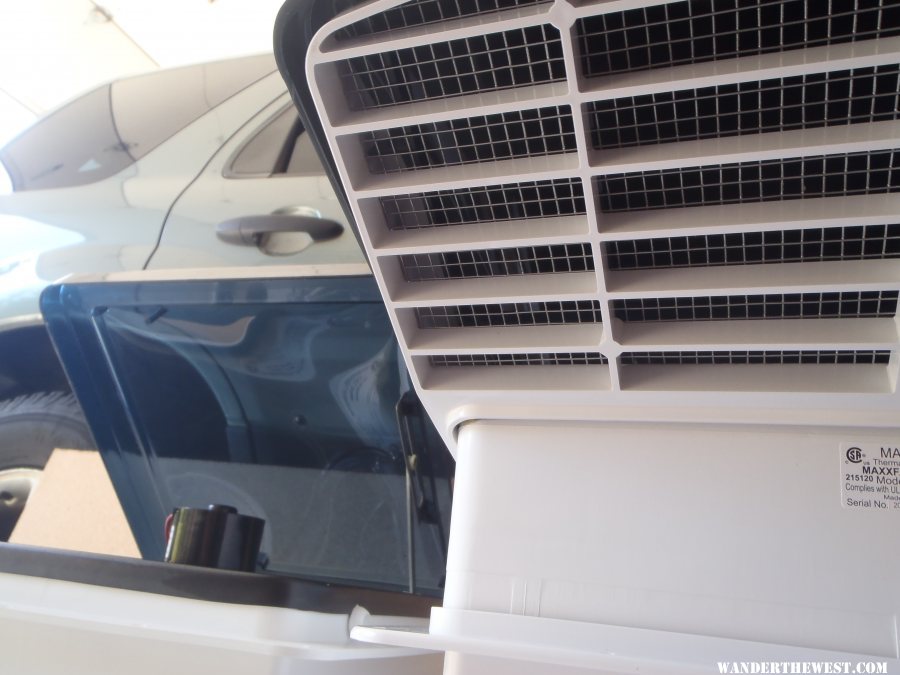 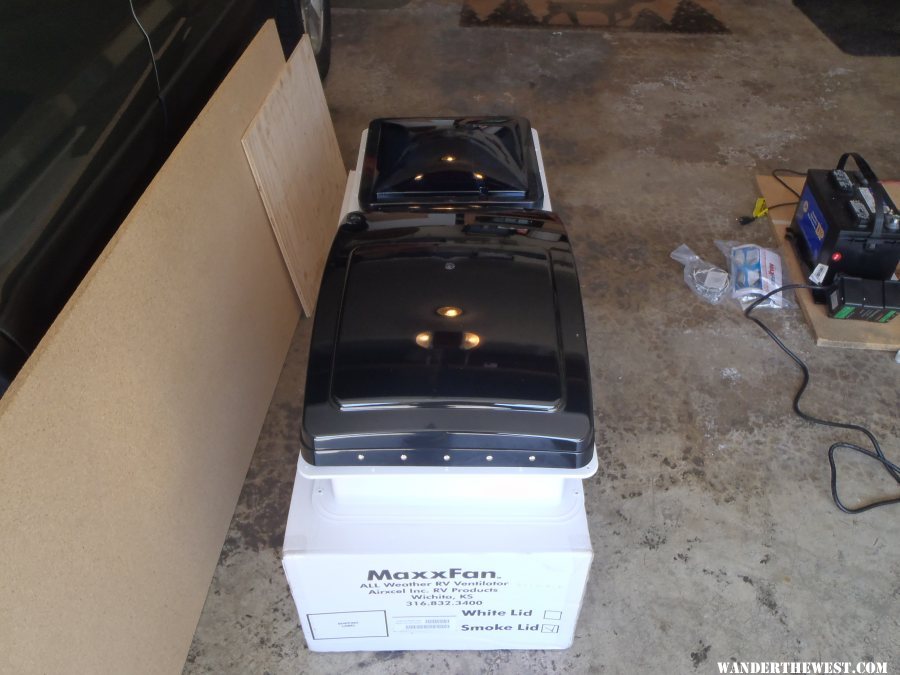 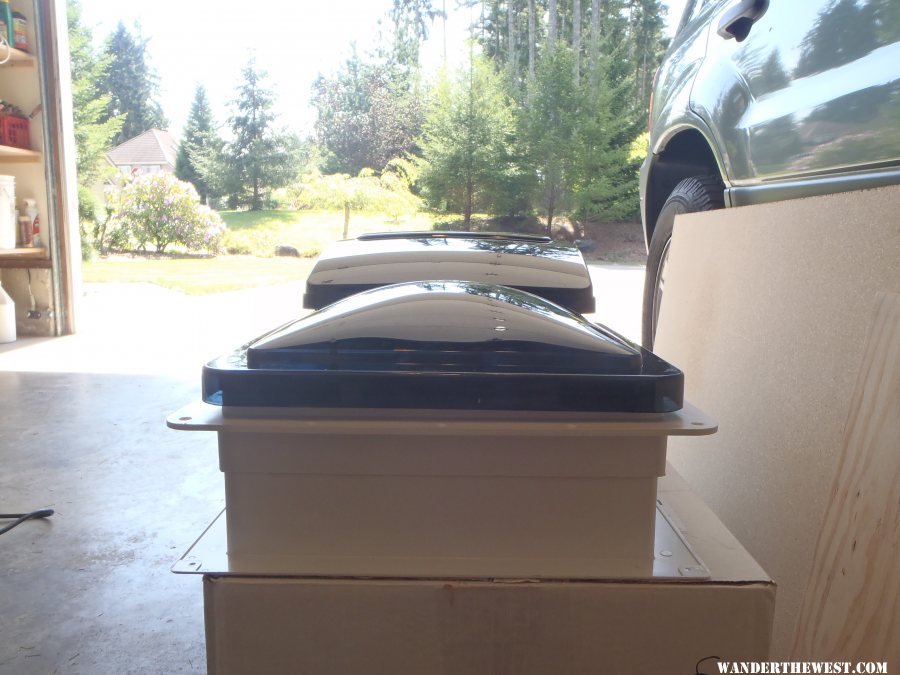 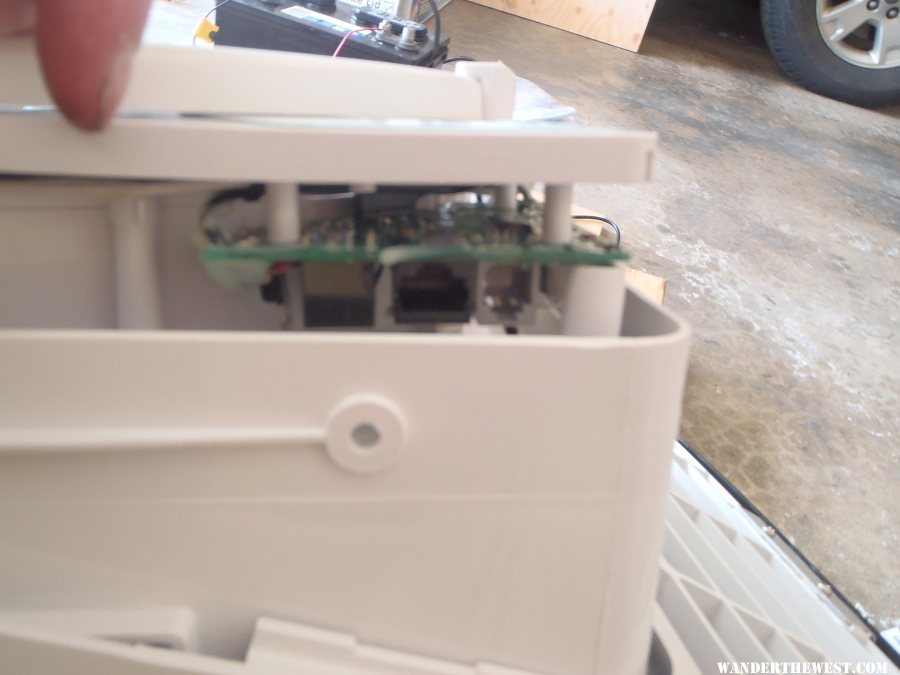 Note: MaxxFan has a data type port built into the control.

To measure the power usage I wired up a Tri-Metric meter with a 500A shunt. Good to the nearest tenth of an Amp. I took a measurement of the fan in each speed setting both blowing in and out. 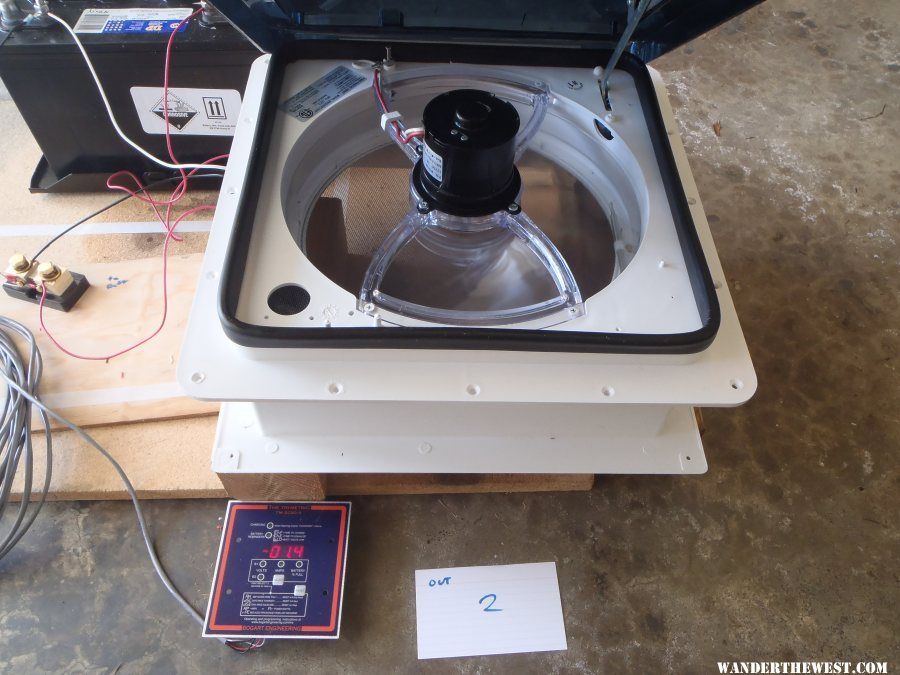 Note: Fan was elevated off of the ground by 4 inches allowing for air flow. The same stand was used for both fans. 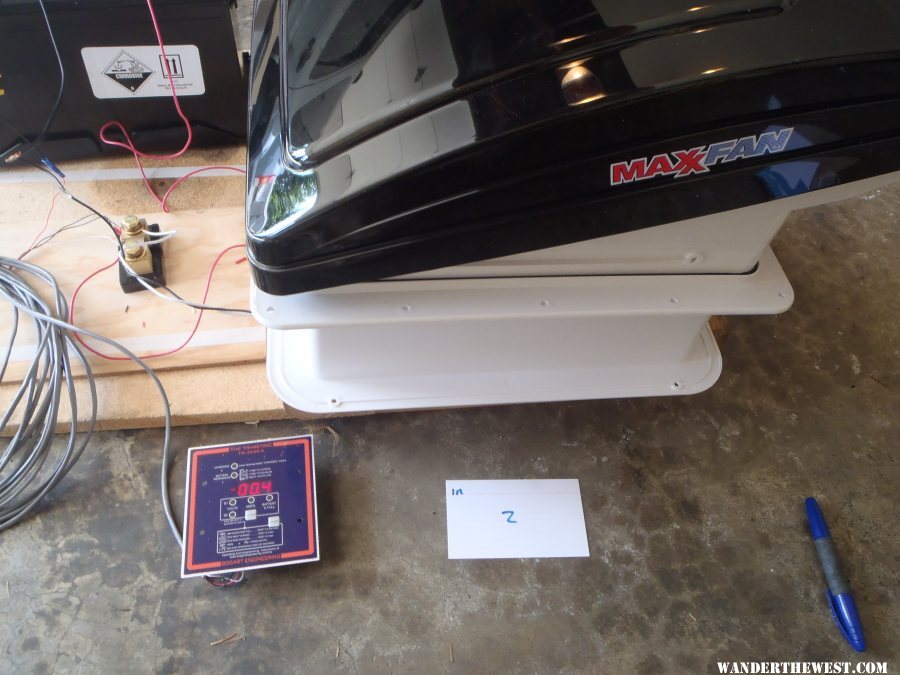 Note: Fan was elevated off of the ground by 4 inches allowing for air flow. The same stand was used for both fans.

I paired up the Fantastic Fan speeds with the MaxxFan speeds using amps. Best I could tell the air flow was similar.

Dome: Fantastic’s dome is advertised as smoke color and has a dark blue color. It lets in a fair amount of light and is more of a dark blue color. When the dome is open you can see the sky through the fan and mosquito net. The MaxxFan’s dome is almost black and is more of what I would consider smoke and when opened it is not possible to see out of the vent (make sense considering what the vent is designed for).

Sound: Fantastic is little quieter at comparable power settings, but on MaxxFan’s lowest setting it is nearly silent.

Fantastic Fan: Made in USA

MaxxFan: Has a separate ring that gets attached to the camper roof that the rest of the unit slips inside of. This allows the unit to be removed fairly easy. The rain cover is very effective in heavy rains.

Build Quality: Both fans feel fairly well made. However the motor on the Fantastic Fan is a little quieter and runs a little smoother.

Thanks for the testing. I have a fan sitting in my shed waiting to be installed. I just have a hard time replacing a perfectly functional fan but I like the low setting there. Nice low draw for running all night.

Great write up and research!
It's always nice to see some real word testing.
I have the fantastic fan 6600 installed aftermarket by myself.
I works great and has 14 fan speeds instead of only 3. It's a great addition to our Hawk.
Too bad it's already installed, I would have looked at the Maxxfan too.
Only downside is that I have about 1 inch of clearance into my garage with the fantastic fan. Maxxfan probably wouldn't clear it.

One can change the world, it only requires kindness

Thanks for the responses! Dr.J yeah the vent is about 2" taller in the closed position.

Clearances! I forgot to mention that in my write up. The MaxxFan is not comparable with the old school aluminum roof racks on the FWC Eagle model due to not enough space between the vent and rack for the vent lid.

To test the air flow use a garbage bag. Basically you put a garbage bag (of a known volume) up to the fans and time how long it takes for the fans to fully fill the bag, you will need a pretty good air seal between the fan and bag.  Convert the volume of the bag to cubic feet, and the time to minutes (decimals not minutes and seconds ie: 1.10 minutes not 1 minute and 6 seconds) divide volume by time and you get each fan's CFM

If I'm not mistaken, Fantastic Fan has a remote controll 12-speed unit of the same footprint as the manual 3-speed.

Yeah. Both fans come with models with remotes and I believe fantastic has the 10 speed also. As far as my knowledge all of fantastic fans are the same standard size. However I could be wrong.

@DEnd: that's a good idea using trash bags to measure CFM. I won't have time to do that for several months but if I find time I'll give it a shot.

Yeah you probably need two people to do it and possibly a mounting fixture to get a good airseal.  But the results if done well tend to be fairly accurate.  I learned about as a poor man's way to commission and test home HVAC systems.

If I'm not mistaken, Fantastic Fan has a remote controll 12-speed unit of the same footprint as the manual 3-speed.

Yes, we have two of the remote controlled Fantastic Fans in our camper. They are very quiet on low speed. They have a rain sensor that closes them automatically if it rains which is primarily why we got them. We like them with a couple of reservations.

I wish they also had button controls because the remotes can be a bit of a pain to use. We often use the manual knob to open them without the remote. Unfortunately this disables the rain sensor feature unless you remember to push the knob back in. Also, I have learned that the remote feature can be a significant drain on the battery as the transmitter is always on and over time can drain the battery. This also drains the remote batteries and they don't last as long as you would think they would. I installed a master switch in the camper so I can shut them (and everything else) off to save battery power.

travelswithrockythedog.blogspot.com
Back to Truck Campers