12 replies to this topic

Anyone running a Propex heater in their camper?  I'm using one in my VW Westy and was curious to how they compare with the units FWC offers.

Anyone have experience with the two units?

I've seen some info on this site about two years ago, then I asked about them 6 months ago when I was at the FWC factory and they appear to be a forgotten issue. My take on it was that the atwood furnace that FWC is using in the last couple of years has such a low amp draw that trying to make the change to the propex units was not worth it. Thats just my feeling after researching the heaters and searching for info.

Does anybody know if FWC is using the Atwood 80 series furnace ? 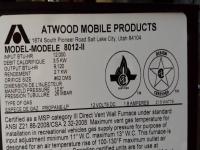 I thought getting old would take longer.

Thanks guys.  Amp draw looks pretty good with that unit, real similar to the propex option and probably more practical with the intake/exhaust locations on the Propex unit.

FWIW - I've got a Propex HS2800 in my new boat.  Draw is 2.0 amps which looks to be a little more than the newer heaters.  I've only used it once so far and it seems to work well.

FWIW - I've got a Propex HS2800 in my new boat.  Draw is 2.0 amps which looks to be a little more than the newer heaters.  I've only used it once so far and it seems to work well.

Thanks PaulT, at 1.8 amps it's almost 1/2 the draw of their older factory installed units.

That's what I like about FWC,  they are constantly improving their product.

I've thought about installing the HS2211 Propex outside, between the camper and truck bed wall. The documentation says 1.7 amps. If it would fit (18" x 9" x 5"), it would be a good use of space, and eliminate any venting concerns. Hook up the propane as needed (as I do my catalytic heater), and bring the heater hose through one of the turnbuckle doors.

I've got a HS2000 and it works fine. I would have used an Atwood 8012 but didn't have space for it and preferred the exhaust setup of the Propex (I didn't want to cut a hole in the aluminum side, nor did I have a place to do so).

As you've seen, the new furnaces also draw very little and you get more BTUs.

FYI Rob in MT: the HS2000 is smaller than the HS2211 even though they're the same BTUs (at least I think they're the same). So if you built your own protective case you might save an inch or two. Having it in the bed of the truck, you might not need as much protection as they put on the 2211, which people supposedly put under their vehicles.

2012 Eagle Shell with a few extras

Also tagged with one or more of these keywords: propane, heater, propex