45 replies to this topic

Look for "pack raft" I know a dealer/user.

Sent from my iPhone using Wander The West

You may also want to check out the SOAR inflatable canoes.  The company is in Healdsburg, CA.  These boats have been used all over the planet.  They sell heavy duty ones to outfitters in Alaska for hunters flying in on float planes.  They produce 12, 14 & 16' versions.  I had a 14 ft model for 10 years.  Paddled it both solo and tandem in whitewater and once flew it to Baja and snorkled out of it.  Very stable and can hold a cooler.  Can be set up to self bail or be closed up.  What I like most about these is that it is a canoe, meaning you are not sitting down inside of it getting wet if it gets rough.  You can sit for flat water or kneel from the canoe seat when it gets rough.  When my wife and I paddled tandem, we used canoe paddles.  When I used for solo whitewater, I used a kayak paddle as shown in photo.  Also, check out The Boat People inflatable boat specialists in California.  They have an extensive lineup of inflatables from the USA and Europe. 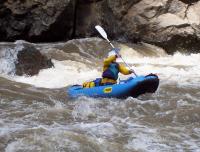 Look into the new designs from Sea Eagle.  They are making some very rigid boats with their new Dropstitch technology

Oops, I just saw this was posted earlier...

I have a hard shell kayak for about 5 years already but I get to use it more seldom because it's getting complicated to transport. So I now want to get rid of it and get myself an inflatable version just because of the ease of transportation. I already have a compressor so it wouldn't be a problem to pump it up.

have any of you folks spoken with owners of Oru folding kayak? Seems like these would suit the TC people well.
http://www.orukayak.com
at one point i know they had a rental program.

Oops, I just saw this was posted earlier...


Bump to see if anyone has used either of these?
Also, interested in invasive species testing/treatment/fees when crossing state lines with packable boats.

I thought getting old would take longer.

A couple of weeks ago Sioux and I stopped in at the local whitewater store to pick up some new rigging straps for our cataraft. We walked out $3,000.00 poorer with this unique concept from Hobie.

Pricey but we recently rented a 2 person kayak down in Florida for a day of flat water birding and my tendonitus would barely let me sleep that night. Hopefully my legs will be stronger than my arms!

Wow, I loved my Hobie mirage tandom, but that sucker weighed a ton and we couldn't lift it to the top of the car much less the camper so we got rid of it. This is an amazing idea, and I would love an actual review after you get it out on the water. I am starting the piggy bank right now!