28 replies to this topic

After a long winter of waiting, planning, hoping and more planning, My all aluminum flat bed has been built and I picked it up yesterday. A 2017 Hawk will be paired up with my 2015 Tundra next Wednesday.

I will be detailing the build process over the next couple of weeks as time permits. The flat bed is covered in a rhino liner material. The bed includes a 20 gallon fresh water tank that will be tied into the camper water system and a 10 gallon grey water tank. The camper was ordered without a heater and I will be installing diesel heat. There is also a 5 gallon diesel tank (since the Tundra is gas). Both fresh and diesel tanks have fillers built into the bed rails. There is a custom modified Little Giant ladder for entry, a stealth side entry system for when I need to access the camper without deploying the main ladder. There is a storage box (waterproof) in the rear of the bed to house/store the main ladder. There are 4 storage boxes in the bed, a built in air compressor with air line and in cab controls to the Firestone Ride Rites that were installed on my truck for my prior camper which was a slide in Hawk. The factory back up camera was built into the bed as were the parking sensors. We were able to also preserve the HD factory tow package and plug. 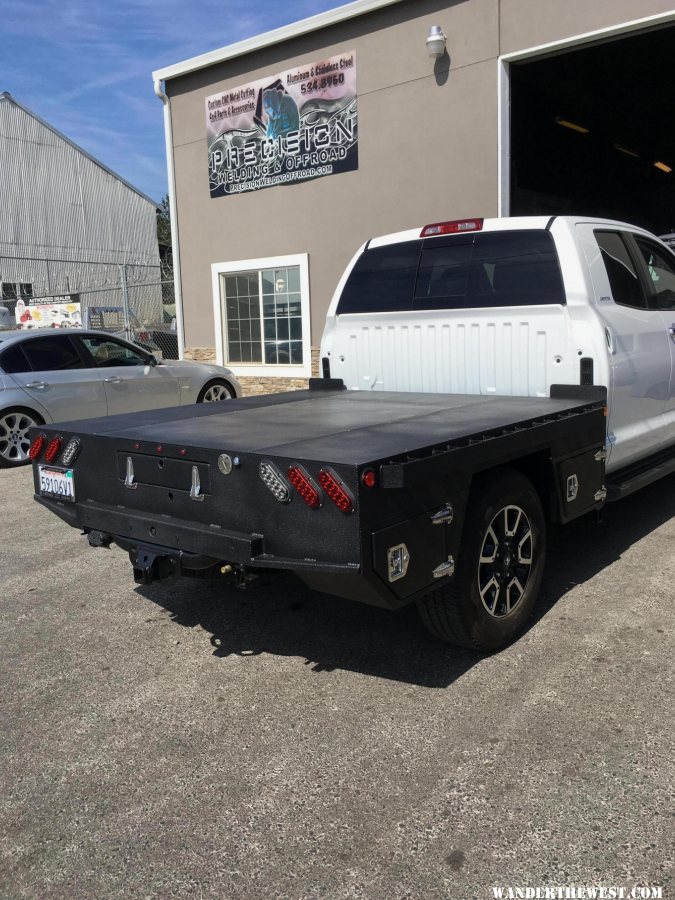 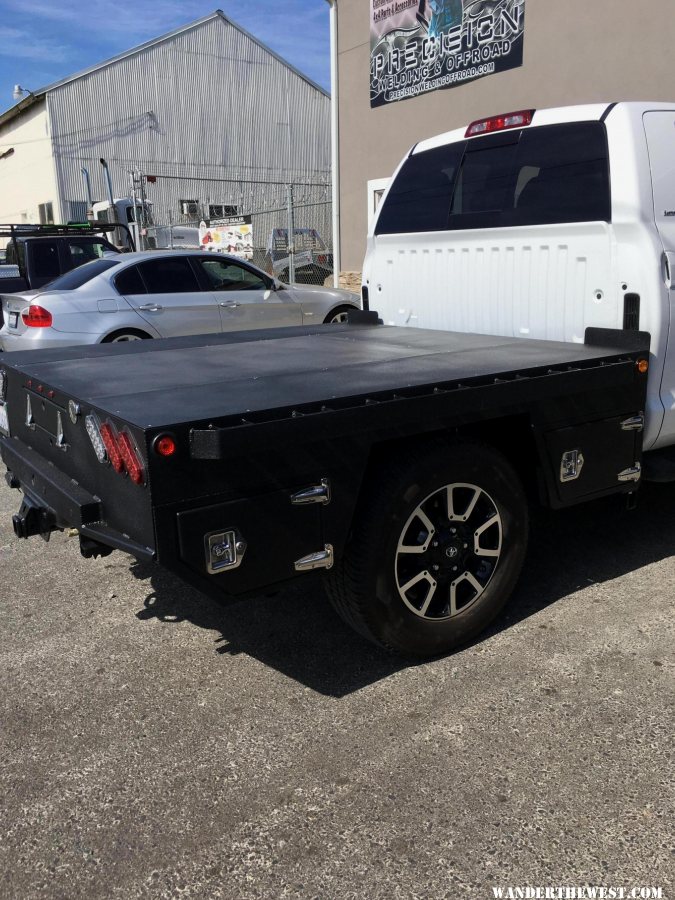 I'll be watching this

Like the bed alone. Should be a great paired unit.

My wife and I  bought a used 2014 Hawk slide-in model in August of 2015 and quickly became hooked on the FWC platform for all of the reasons that you are aware of.  After a three week trip living on the beaches of Baja, Mexico, in March 2016, we knew exactly what would serve our long term needs from the FWC lineup and it was a flat bed Hawk model.  That decision was the easy part of this project.  But, this camper was going to require a flat bed and if I was going to go that far, I might as well get it exactly as I wanted it!  Thus began a ten month journey of reading and researching everything I could find from other members who had written about their flat bed builds and projects.  I am grateful to them and the folks at FWC who have assisted me immensely in my research.  Hats off to all of them!  My hope is that by detailing my build process in detail, I can pass some of that inspiration on to future "dreamers" and give back some of that compiled knowledge to the community.

For me, probably the hardest part of this project was locating the right builder to bring my concepts and dreams  to fruition.  I don't weld, don't have a shop and still work most days.  But, I do know how to dream and research the web to find what I am looking for.  There are many fabricators that can build a flat bed for a truck.  Most however are reluctant to customize the bed to fit your needs.  I probably spoke with a dozen different shops prior to meeting the owner of Precision Welding in Oroville, CA.  I was running into constant dead ends and was pretty much resigned to ordering an "off the shelf" bed and giving up on many of the ideas I have incorporated into this build.  Originally, I visited Precision to look at the two different models of beds that they carry to see if either could at least be adapted to fit my needs.  It was then that the owner, Jerry, asked me if I wanted him to build a bed for me from scratch just as I wanted it.  How could I possibly resist that offer??

That conversation took place in early December 2016.  He gave me a price and told me to write up exactly what I wanted in the bed.  Well, he got what he asked for when I delivered a 15 page document with drawings, photographs and requests for features we had not even discussed on the first visit.  Jerry never even blinked an eye.  He told me how long it was going to take, how much it was going to cost and informed me that I would need to visit the shop at least two more times to make decisions as the project evolved.  You see, Toyota does not publish an up fitters guide so until the bed came off of the Tundra, we weren't even sure where things were going to end up!

This photo shows the grey water tank.  It is located in the front left corner of the bed.  By my best calculations (it is an odd shape), it will hold 10 gallons of grey water.  It is hidden behind a door made to look like another storage box on the bed.  What the heck, I still have 3 more boxes! 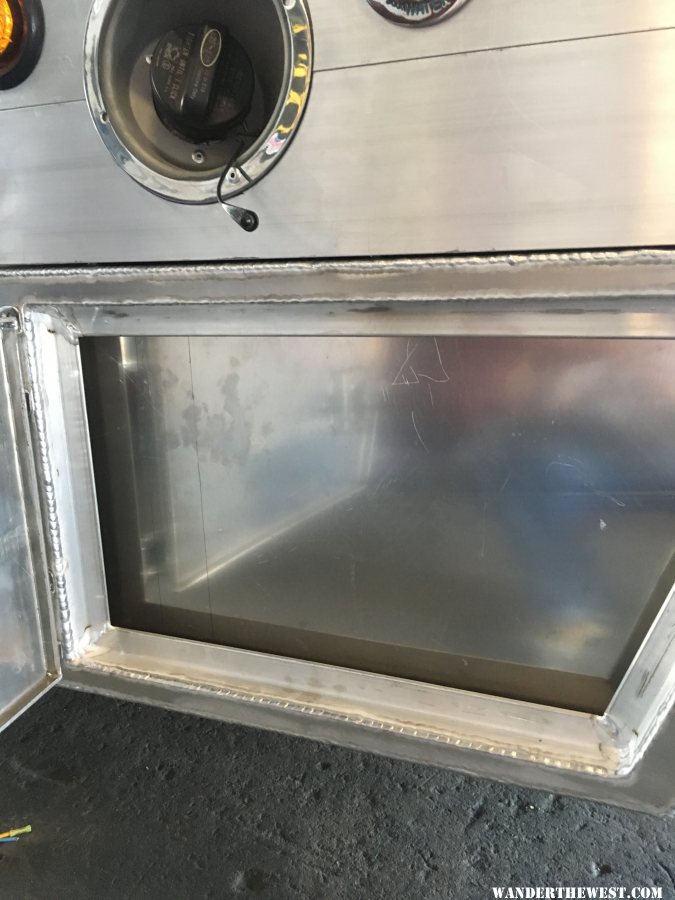 This photo shows the top of the grey water tank built out of aluminum with all of the plumbing fittings.  It includes a 3/4" inlet to match the size of the drain hose inside the FWC.  You can see the edge of the fresh water tank in the corner of the photo. 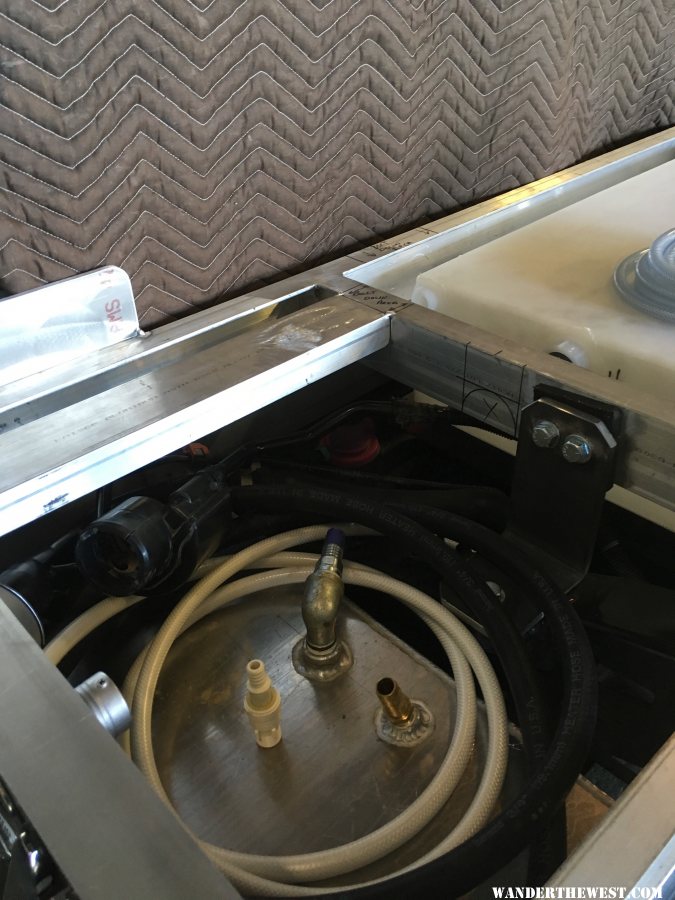 During my first build visit to Precision, we explored locations for the largest possible fresh water tank.  This area at the front of the bed looked like a winner!  It is just below the FWC internal tank, forward of the rear axel and as low as possible in the frame.  We were able to fit a 20 gallon polyethylene tank in this location.  Jerry welded a support tray for the tank which is visible in the final photo of this post where the bed sits upside down just prior to the liner application.  It will only be used for extended trips off the grid because of the extra weight.  Those extra 20 gallons will allow me to stay longer on some remote Mexican beach next winter! 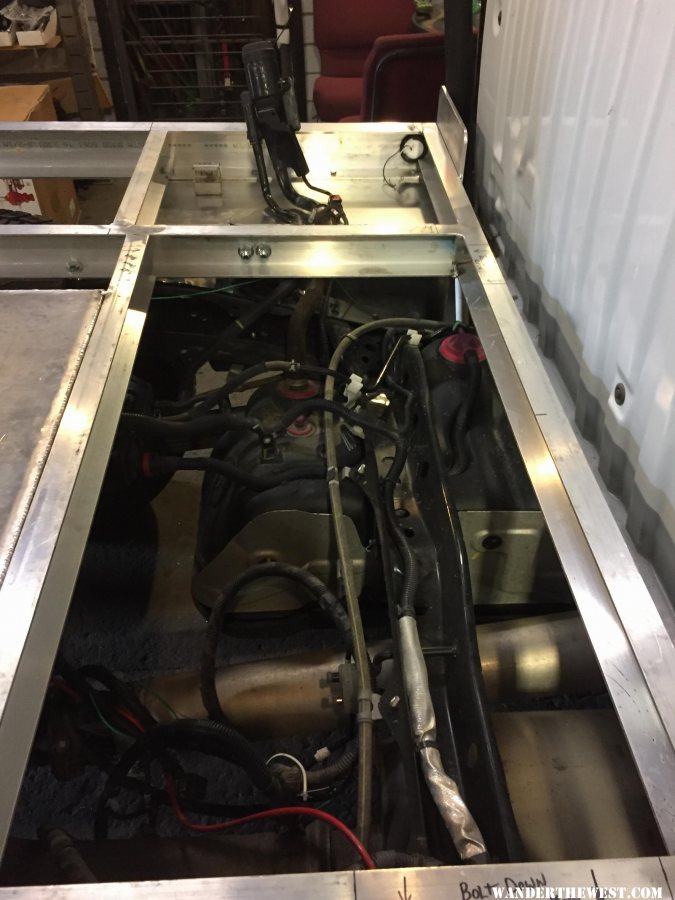 And here is an image with the fresh water tank in place. You can also see the fuel inlet, water inlet and the air vents for the fresh and grey water tanks.  The fill and air vent styles were chosen to exactly match those on the FWC which will be directly above the flat bed components. 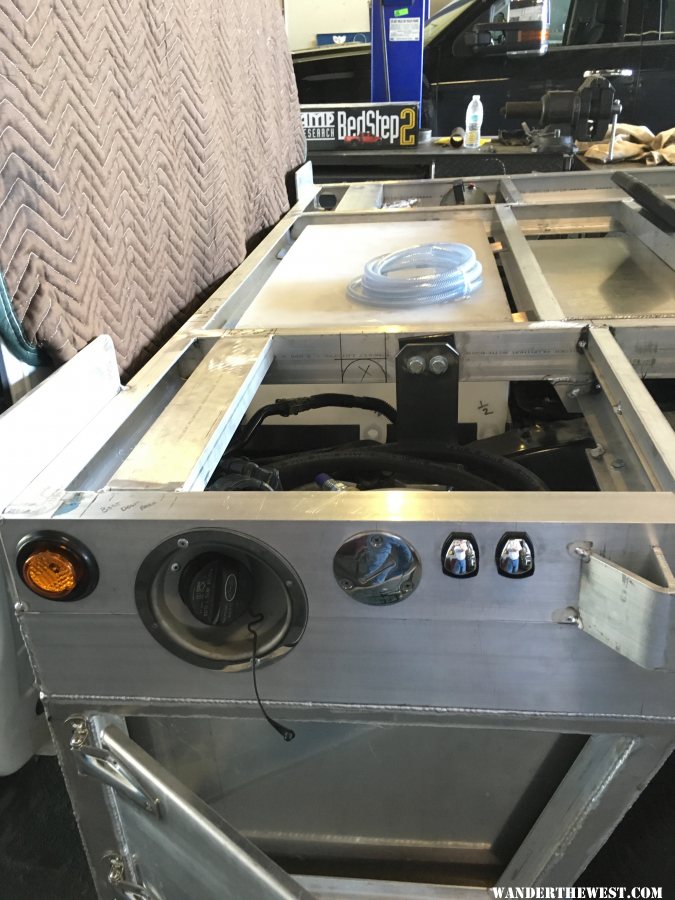 The next image shows the location of the drain petcocks for the fresh and grey water tanks.  They are out of the way, high enough to avoid rocks on the trails (I hope), easy to access and change when they inevitably fail.  Black was chosen to hide them, match the color of the bed and the style matches those used by FWC.  Now, if I can just keep it straight as to which one is for the grey water tank! 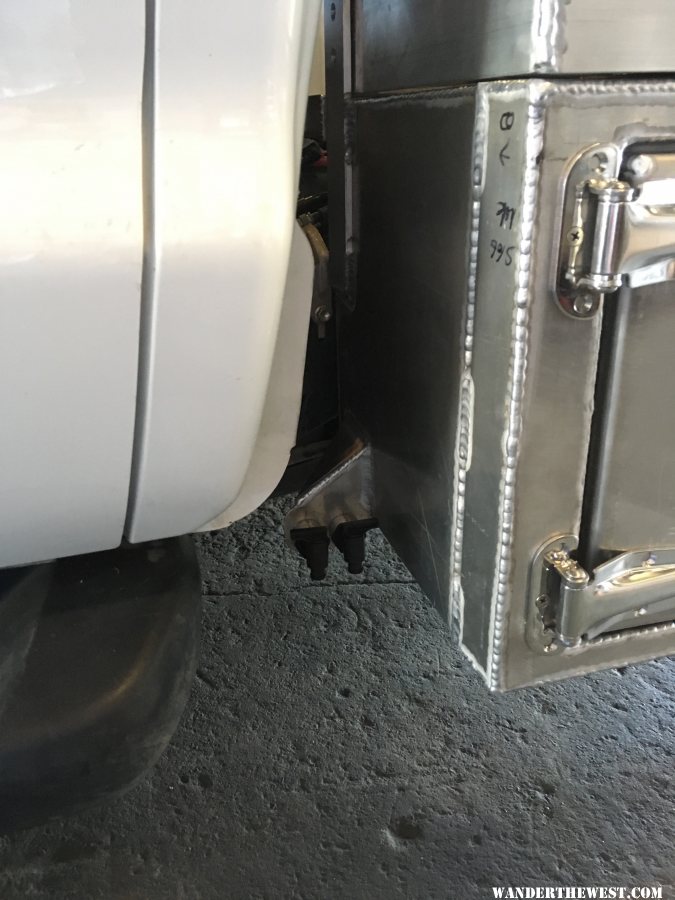 Jerry even gave us four different wheel opening mock ups to choose from. We ended up choosing the last one for its angular simplicity and how it matched the rest of the angles on the bed.  That is a good thing for a person who is suffering from OCD! 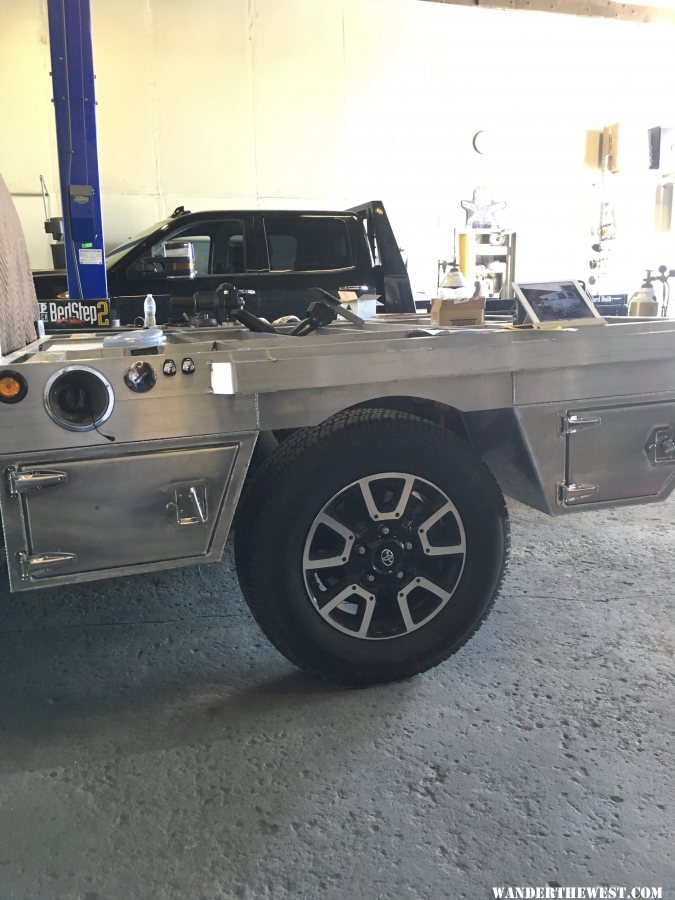 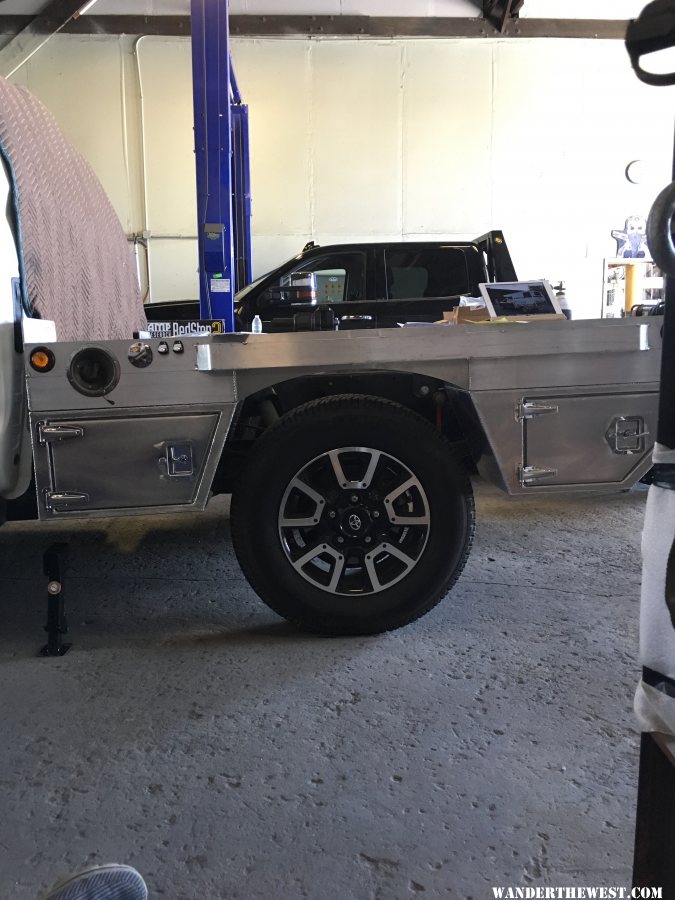 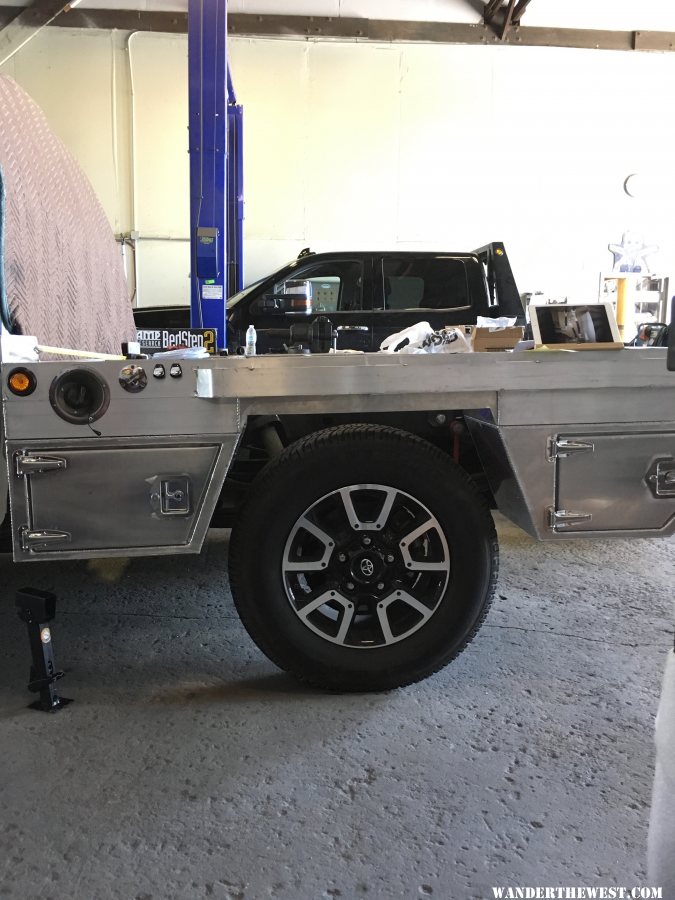 The final photo today is of the bed just prior to getting sprayed with bed liner.  The bed is upside down and gives a good view of the fresh water support brace and the rear ladder storage box in the rear apron of the bed.  I chose bed liner to give the bed a finished look and hope that it will resist scraping and chipping better than paint or powder coat paint.  You can see the permanently mounted studs that hold the boxes in place in the lower left corner of the photo.  We chose this method of install to give us an easy access for the removal of the boxes.  It also allows us to gain access to the compressor, air tank and liquid tanks as well as wiring in the event of needed repairs. 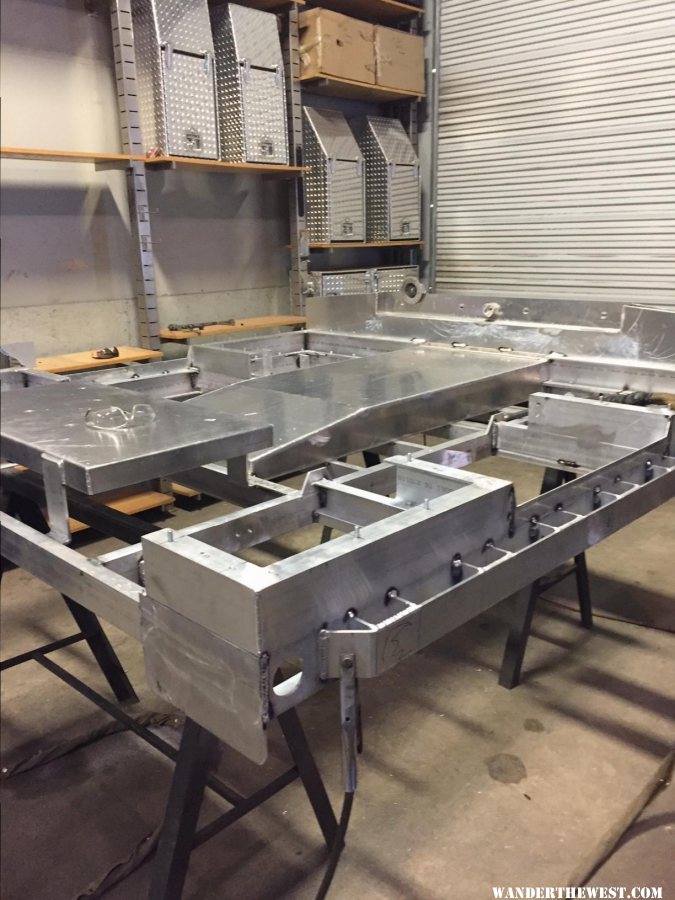 This is sounding strangely familiar...... 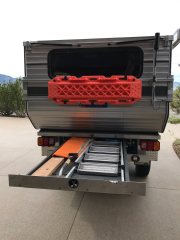 I reckon you'll dial the suspension and tires upon completion of the project?

I am curious what you are using for your stealth step - I have tried various options and none have been to my liking.   I usually end up using the tire for quick in and out.

Sounds like you and Jerry are two of a kind... even more OCD than me!

One reminder which I'm sure Jerry is on top of is many flatbeds suffer from serious problems filling the gas tank properly because you have dropped the angle of the filler tube. Originally my flatbed was agonizing to fill with the pump clicking off. My builder rerouted the angle by attaching it to the camper and it is still slow but tolerable now.

NOTE: The photo is before we changed the filler tube and the plywood ramp under the front wheel is what I would drive the truck up onto at a gas station to change the angle and get gas into the tank. Don't have to do that now. Kinda miss the ramp for leveling though!

Keep us posted. You are going to have to exercise seriously self-control to stay even remotely within your GVWR. I'm slightly over with my Ram 2500! 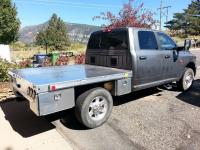 I am a fan. Thanks for sharing. Jerry looks to be an excellent fabricator. I'm surprised how difficult it was to find someone willing to do a full custom bed build. Perhaps it is because you went aluminum, and there aren't that many shops out there capable?

I am a fan. Thanks for sharing. Jerry looks to be an excellent fabricator. I'm surprised how difficult it was to find someone willing to do a full custom bed build. Perhaps it is because you went aluminum, and there aren't that many shops out there capable?

Correct. Everyone will work in steel. Few will do custom aluminum fabrication. By far the biggest challenge of my project. Fortunately I did find a good company 50 miles away.

Also tagged with one or more of these keywords: Flat Bed, Flatbed