Pop Up Camper and Toyota Tundra For Sale

1 reply to this topic

I am selling my Truck and Camper Adventure Rig. 2014 Palomino Pop Up Camper on a 2008 Tundra with 86,000 miles. Located in Ogden, UT. Brett 208-two90-sevenone71. $34,000
Your adventure van is played out. Its too expensive and you spent way too much time trying to make it into a camper. Stop your silly #vanlife. This rig will go farther down 4X4 roads than your van and you can spend ten minutes taking it off when you get home and haul a yard of compost for your garden.
This has been the perfect rig to explore the West while mountain biking, motorcycling, climbing and elk hunting. When looking for the most functional rig to explore in, I considered a van but most didn't have four wheel drive and if they did they were way too expensive. I also wanted the option to take the camper off at base camp and be able to explore with just the truck or haul stuff for home projects. For example, last weekend we set up the camper outside Canyon Lands NP and took the tundra 30 miles down White Rim Road. We didn't see an Adventure Van all day. We would have taken the camper if we had a camping permit and done the whole 100 Mi. Road. 4WD situations like this is where this rig shines. It has higher clearance than a van and is shorter for tight spots. The low profile of the camper also allows for better clearance under trees
2008 Toyota Tundra

2008 was the first year Toyota announced it was coming out with a truck to compete with Chevy, Ford and Dodge. It won truck of the year that year mostly because it had one of the most powerful engines in any half ton configuration and it beat everyone in Safety Tests.

I bought this camper in September of 2016 from an older couple that had used it four times. It is in great condition inside and out. I have been on several multi day trips mostly to Southern Utah but one big trip to the Northwest and coast. There are lighter campers out there if you have $20,000.00 to throw down on a used pop up from Four Wheel Camper but this ones just right for the Tundra.
Fridge that runs on gas or electric. Air Conditioning unit, Heater, two burner stove, double sink, queen bed (Im 6'3" and its tricky to find pop ups with a big enough bed), 16 gal. water tank, no toilet. Its low profile really does help with fuel economy and wind. It also fits in many parking garages for stealth camping in the city.

The following additions were key to making this the ideal 4X4 camper package. I did a ton of research and no shortcuts were taken.
4 Torklift Fast Gun turnbuckles The built-in quick-release levers on these turnbuckles make it fast and easy to secure your truck bed camper to your vehicle. Polished stainless steal. Expensive but worth it if you want to take your camper off often or take it down 4x4 roads. Built in springs give a little. $700.00
Pair of Front & Rear TRUE Frame Mounted Tie Down Bundle. Prevents vehicle sway and camper movement in all directions. Avoid. bed and bumper damage by attaching to the strongest part of the truck: the frame $670.00
Genuine Toyota TRD stabilization bar to control sway from side to side. $250.00
Firestone Ride Rite airbag kit to prevent sag when camper is on. $300.00
10 ply Big O Foot E rated Tires for stiffness and to prevent sidewall failure on rough 4WD roads. $950.00

This is a tough rig that will not disappoint. Brett 208-290-seven1seven1 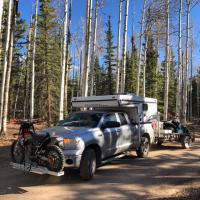 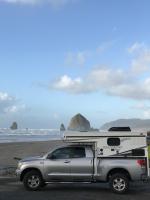 Perhaps you could post a price with this as well.

Also tagged with one or more of these keywords: pop up, tundra, palomino