24 replies to this topic

What are you getting?

Looks nice.Hope you get a lot of enjoyment out of it.

I got the seat that is IN the boat.

I inflated the boat yesterday. I had no trouble hefting my Advanced Elements on my shoulder and walking a good distance but this one is a foot longer and 10 pounds heavier. And I am not getting younger. I ordered a kayak cart.

My solo AE weighs 36.  I remember carrying a Hyside Paddilac - a 40 lb whitewater kayak - on some long portages - 15 years ago. I also walk a lot slower now.

Maiden voyage in my "new boat"!

On Prineville Reservoir, ENE of Bend, near Bowman Dam 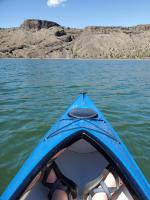 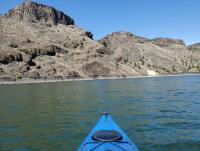 Lots of cool columnar basalt all through this area.

Bowman Dam, which forms the Prineville Reservoir out of the Crooked River 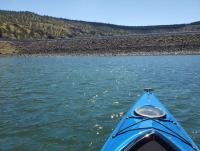 Man, if this baby busted I'd be in for a wild ride... and in a totally inappropriate type of boat!

Last time I was at Prineville Res I was a freshman in HS. I won't mention how long ago that was. Sure wish that date had gone better....

Somehow I don't see either of you running the Walker River on the stretch next to 395 in those.

Man, if this baby busted I'd be in for a wild ride... and in a totally inappropriate type of boat!

My forays onto Prineville Res have always included wind driven waves; wished I’d had a sail!

My second outing in my new boat, this time to a more classically-scenic locale than the first: Sparks Lake in the central Oregon Cascades, about 30 miles from my house.

My paddling partners were a couple of fellow WTWers -- Bend, Oregon Chapter.  We were paddling 3 different models of Eddyline kayaks. 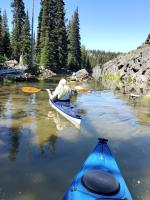 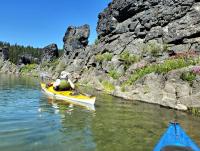 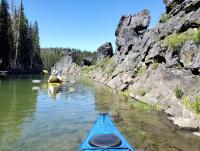 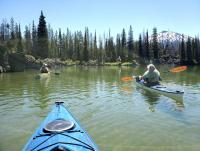 Downhill and XC ski mountain, "Mt Bachelor", in the background. 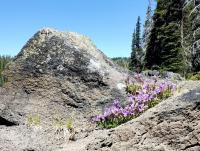 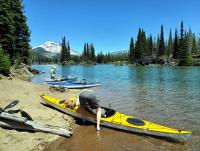 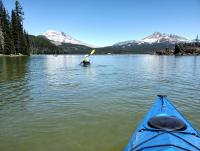 "South Sister" and "Broken Top" mountains visible to the north.

It was beautiful...but good thing we got there by 10am -- we got the last 2 official parking spots in the lot.  When I got off the water a couple of hours later many cars were parked alongside the narrow potholed rutted dirt road.  And it's a weekday!

When I moved to Bend in 1978 the city's official population was about 15,000.  Recently it was estimated to be almost 100,000.  So, nice places get crowded.  They can't update the city-limit population signs fast enough to keep up.