Advice re: Tying Down to Tacoma

13 replies to this topic

The idea behind having the tie downs point towards each other is to hold the camper in place, so there is no movement, not forward and not rearward. If you have a constant forward load the camper will be pulled into the front of the bed which can/will damage the camper skin and possibly the frame.

I think the bumpers solve that problem if you've got them, no?

Climbing anchors will work if the bed bolts are not under the floor of the camper.

Why not just drill new holes in the anchor bar?  Too close to the existing holes?

Sounds like he doesn't have the means (a drill) to drill the new holes.

Update:  This was a pretty significant pain in the ass, but I eventually got everything worked out and just got back from a successful maiden voyage camping around Wyoming and Montana.

1. Certain of the Tacoma bed bolts were extremely difficult to remove (as in, even extractors didn't work) but ultimately got them out.

2. I ended up drilling new 1/2" holes in one of the two Tacoma mounting bars I got from FWC, using a friend's drill press, so that I could use the rear set of bed bolts as the second tie-down location (instead of using the middle set of bolts). The measurement on these has to be precise, but there's room enough to drill the new holes without encroaching on the inner set of existing holes that come on the bars.

3. Once I got the holes drilled, I realized that the existing truck bed bolts would not work for mounting on the rear-most set of holes in the truck bed.  Although all the bed bolts are identical, and although the existing bolts work when installing the mounting bars on the front and middle sets of bed bolts, the receiving holes for the rear set of bolts are situated lower on the frame than the holes for the other two sets of bolts, such that the stock bolts will no longer thread once you've run them through the mounting bar and the spacers that go beneath the bar (the mounting bar and the spacers each are about 3/8" thick, so 3/4" combined).  I went to several local hardware and auto parts stores, but nobody had longer otherwise-matching bolts on hand, so I had to order some from Fastenal.  Luckily, these came in about 2 days' time.  (For reference, I used a 12mm bolt, with a 1.25 pitch, 150mm long, and with a ~3/4" hex head.)  The bolts from Fastenal had much less threading on them than the stock Tacoma bed bolts, so I used four 1/2" spacers on each one to make sure I was keeping more thread biting in the hole.

4.  If you're looking to mount like this, another potential issue will be clearance of the camper wings, both for the bumpers that come on the mounting bars and the angled-up ends of the mounting bars where the turnbuckles attach.  Luckily for me, I already had built a 5.5" T-shaped platform for the camper to sit on top of.  (I already needed about 2.5" of lift so that the sides of the camper would clear the side rails of my truck bed, and then I went ahead and made it bigger so that I can store skis underneath the camper.  Got this idea from, and basically built the same platform as, @ Living The Dream.)  Because the new holes I drilled in the mounting bars are closer together, I needed to make my platform slightly narrower so that it sit flush on the bars and fit in between the two rear bolts and washers.  For me, this meant the outside long edges of the platform each had to be about two inches in from the edge of the camper.  As for the "T" portion of the platform (i.e., the squares I built to undergird the wings of the camper), I cut each of those back to make them about 3" shorter than they had been (from about 20.5" to 17.5").  This allowed for the platform to fit in the bed, with the mounting bar bumpers and angled-up turnbuckle receivers sitting behind the back edges of the wing portions of the platform.  The camper itself then extends out over the platform in these areas, but because the platform is 5.5" high, the camper clears everything, and the turnbuckles reach to the eye bolts I installed on the camper with no problem.

5.  For the turnbuckles, I'm not sure if this is standard, but the Tacoma tie-down kit I bought from FWC (through Rocky Mountain FWC in Arvada, CO) came with two longer turnbuckles and two shorter turnbuckles, as well as a 3/8" stainless quick link for each tie-down (4 total).  I had to mount my own tie-down points on the camper itself, and I had spaced them so there would be about 6" from the tie-down point on the bed to the tie-down point on the camper.  The two longer turnbuckles, with a quick link on one side, worked great for two of the tie-downs.  However, the shorter turnbuckles did not fit well, so I then went and bought extra quick links and a variety of alternative turnbuckles at Home Depot to see what would work for the other two tie-downs (I was under time pressure to get this done and get headed out on our camping vacation, so I went with more options and plan to return the things I didn't end up using).  What ended up working, actually, was using the two shorter turnbuckles with one of the stock hook screws on each one, and then swapping in for the other hook screw a longer forged-eye-bolt screw that I pulled off one of the extra turnbuckles I bought at the store, plus adding an extra quick-link to the other side.  So in other words, for each of the other two tie-downs, I had two 3/8" stainless quick links (one on the eye bolt on the camper, and one on the tie-down hole on the Tacoma mounting bar), then the shorter FWC hook-ended turnbuckles, each with one hook end removed and replaced with a longer-stemmed forged-eye-bolt screw.  A pic of each type of tie-down below.

6.  Finally, I also bought some rubberized matting to supplement the matting that comes with the Tacoma tie-down kit, both to fill in the extra space created by moving the second mounting bar to the rear set of bolts and also to cover the tailgate (as my camper sits on the tailgate).  It wasn't a perfect height match with the matting that comes with the kit (was maybe a little under 1/8" less thick), but it seemed to work out fine.

Overall, even though it was quite a process, this all proved to work out great, and the camper stayed super secure over the course of our ~1,800 mile trip, even deep on some pretty burly forest service roads in Montana.

(Several of the pics below uploaded upside-down.) 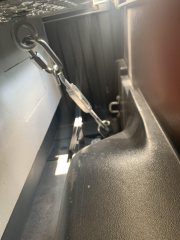 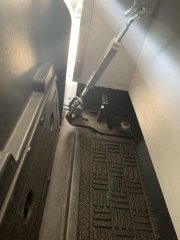 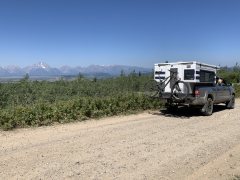 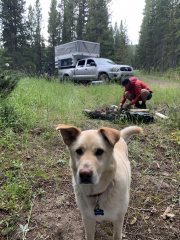 i know how this goes...I picked up my camper in Boulder CO and it was a mad dash to get it secured in order to hit the road and make it back to southern California. ended up taking a 5 day weekend instead of the 4 planned in the end.  I actually drove it on the stock rear tie downs and on the front I had already drilled out the drain holes and placed eye bolts there previously (i know everyone's going to freak out that i used the composite bed...it was totally fine and we were able to get about 15 miles of washboard in that would rattle the turnbuckles loose pretty good before doing any damage hehe)

Nice to hear the maiden voyage went well and nice to see the pics of that gem, its come a long way...

Also tagged with one or more of these keywords: tie down, tie downs, tacoma