267 replies to this topic

Hey all-  I've been looking for a Blazer model 4wheel camper for a very long time.   I found it finally last week on Craigslist and checked it out yesterday and ultimately pulled the trigger despite some flaws.  First off the target vehicle the camper is destined for. I've got a 1991 Blazer that I'm running a 5.3L LS engine, 700r4 trans, 241 t-case and 8 lug D44 front and 14b full floater rear axle.   It's been a long time project that's been roadworthy for over a year now. 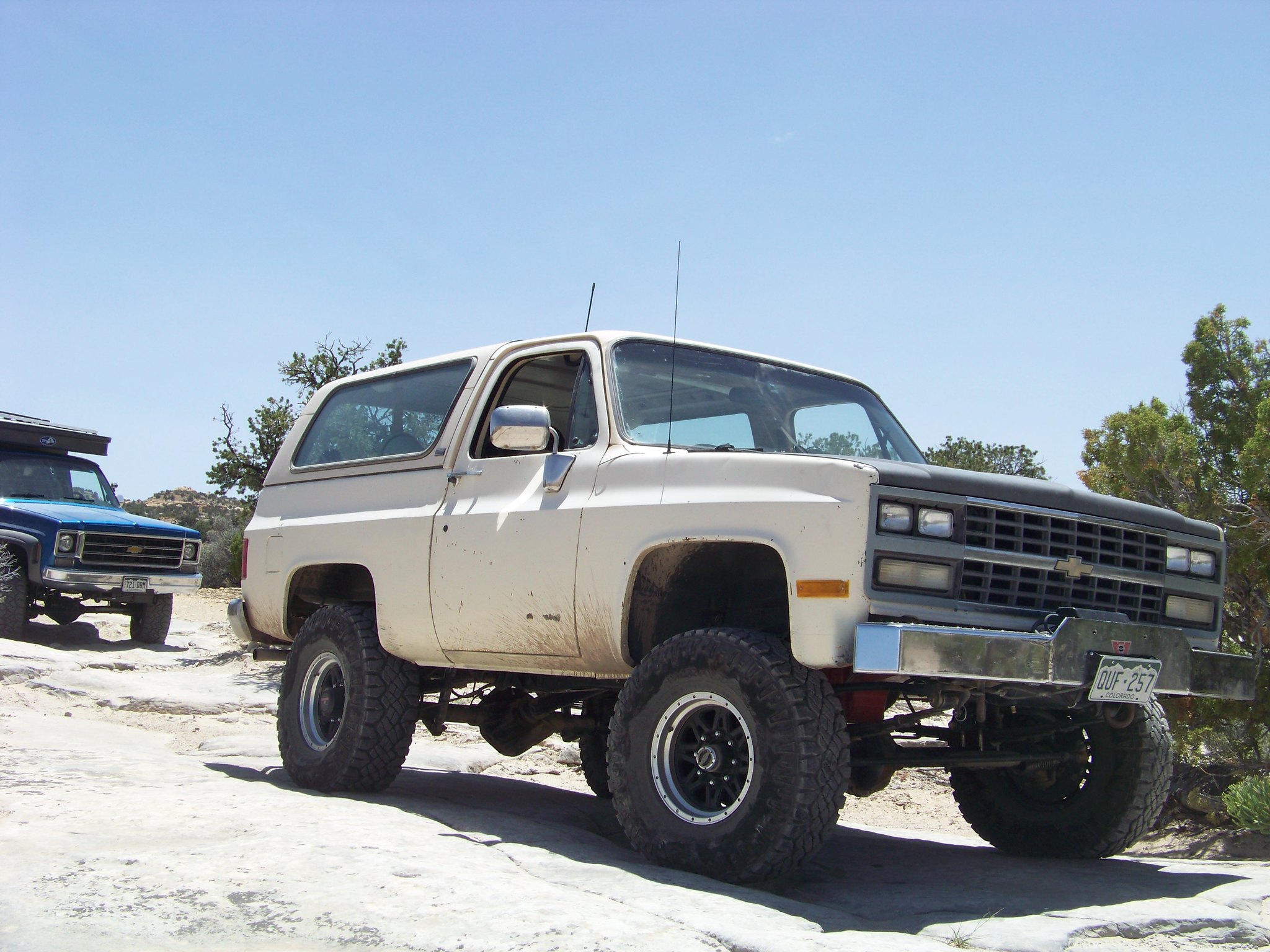 The Blazer is very off road capable but not a fun place to live out of for a week in Utah.  Sleeping inside the Blazer requires cleaning out a weeks worth of gear.  So we didn't do that, I used a Hammock or a tent depending on the terrain and if I could hang my hammock or not.  This is my second Blazer and Ever since my buddy had a Pheonix camper built to his specs for his 78 K10 I knew I wanted to find one of these special campers. 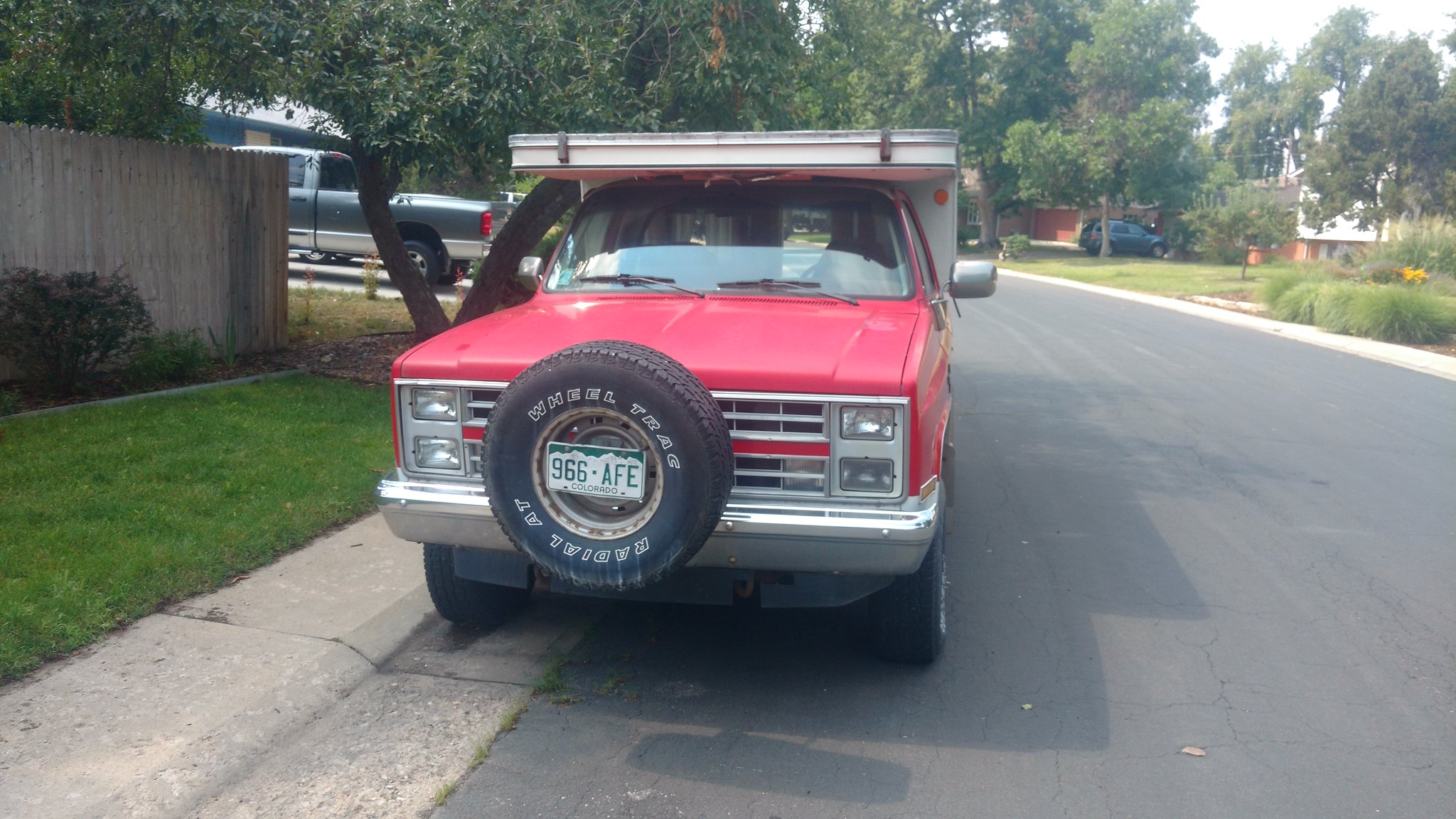 Sharp eyes will be drawn to the main issue.   Yep, the particleboard used in the cabover and front wall is rotten.   Meaning there is a leak somewhere.  The seller was very forthcoming and indicated the leak was a couple of roof screws that were no longer sealed and a cracked roof vent. 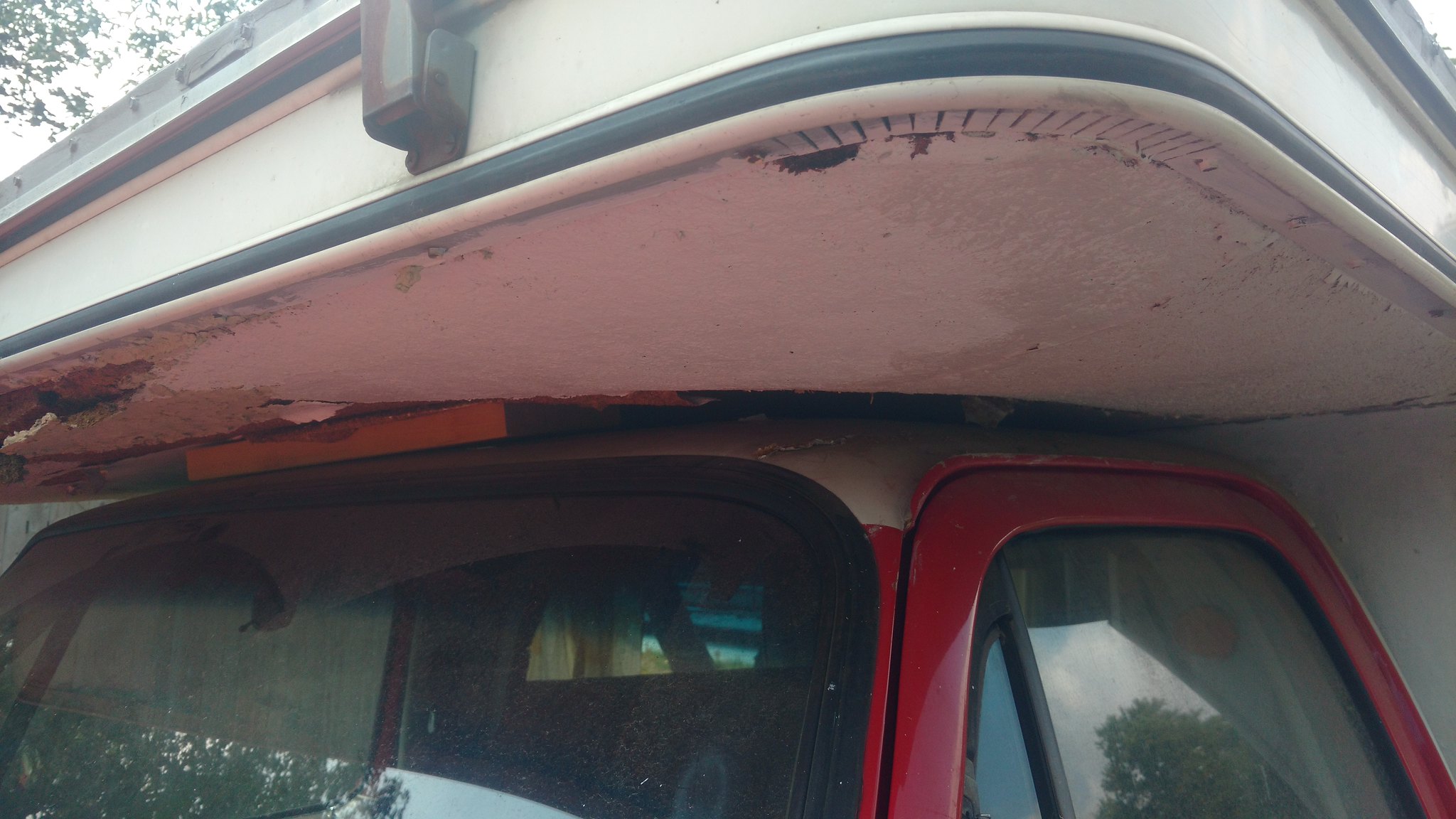 The roof is solid, but the seam to the edge is dried up and missing in multiple areas.  The vent is covered currently and the inside is dry.  Thankfully the fabric portion is in great shape and not moldy or cracked. 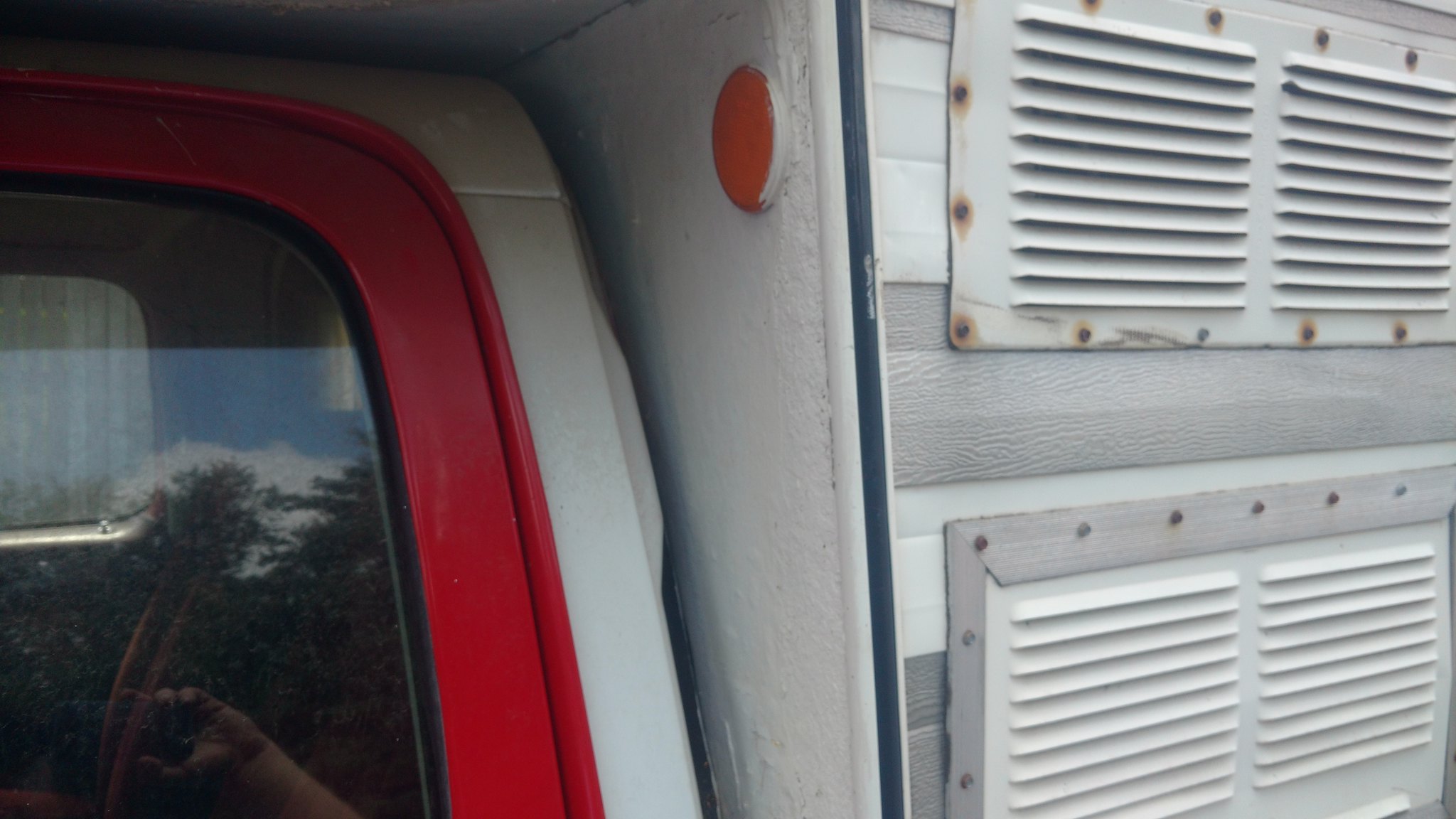 Inside the headliner is loose in multiple spots, more likely due to the roof leaking.  No water staining though. 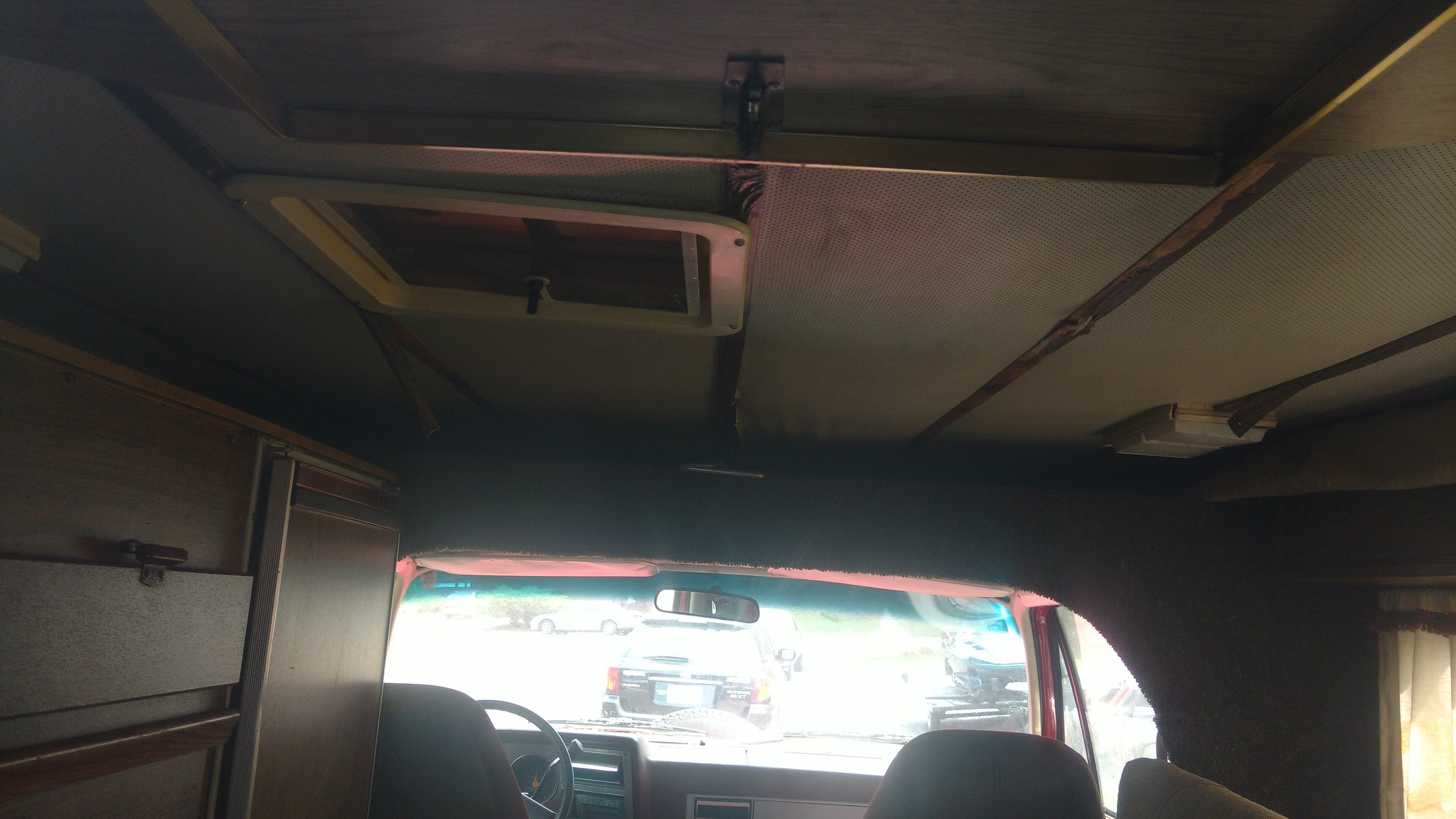 Still the rest of the unit is very solid. 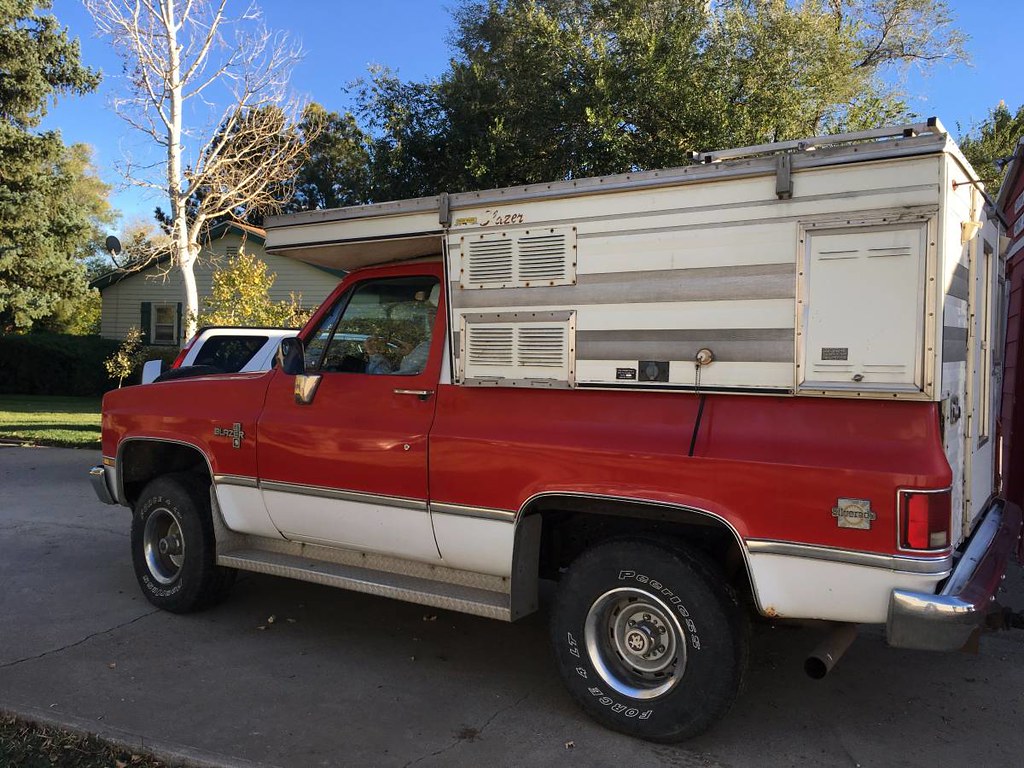 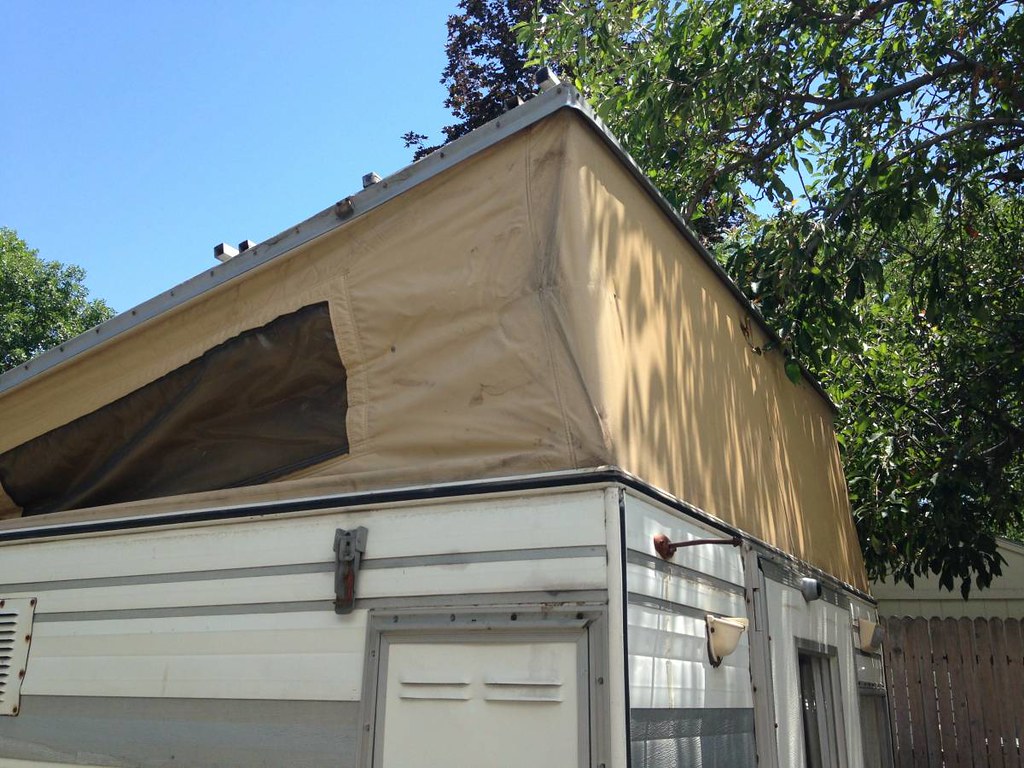 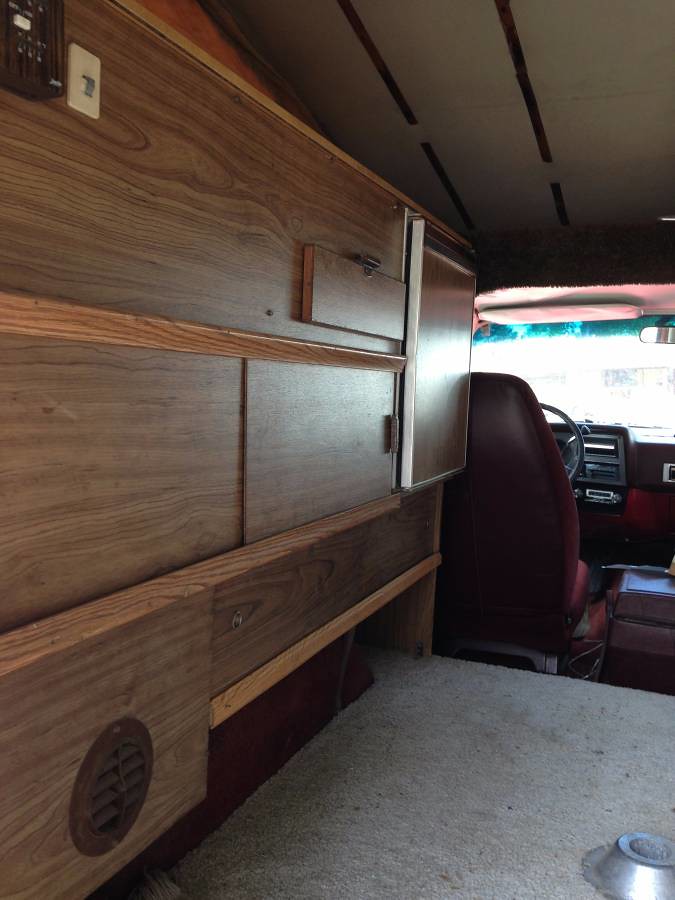 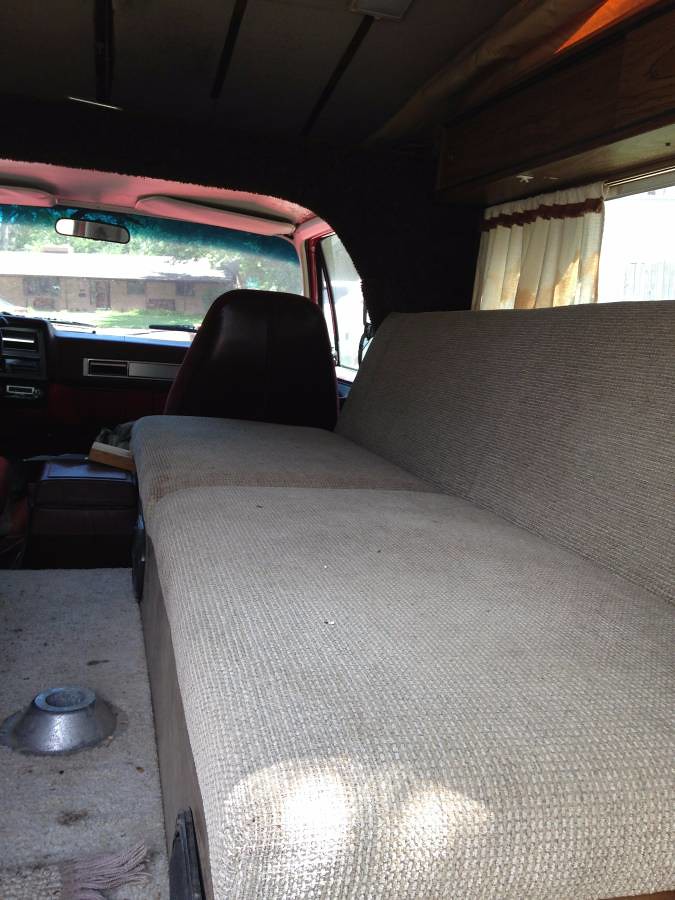 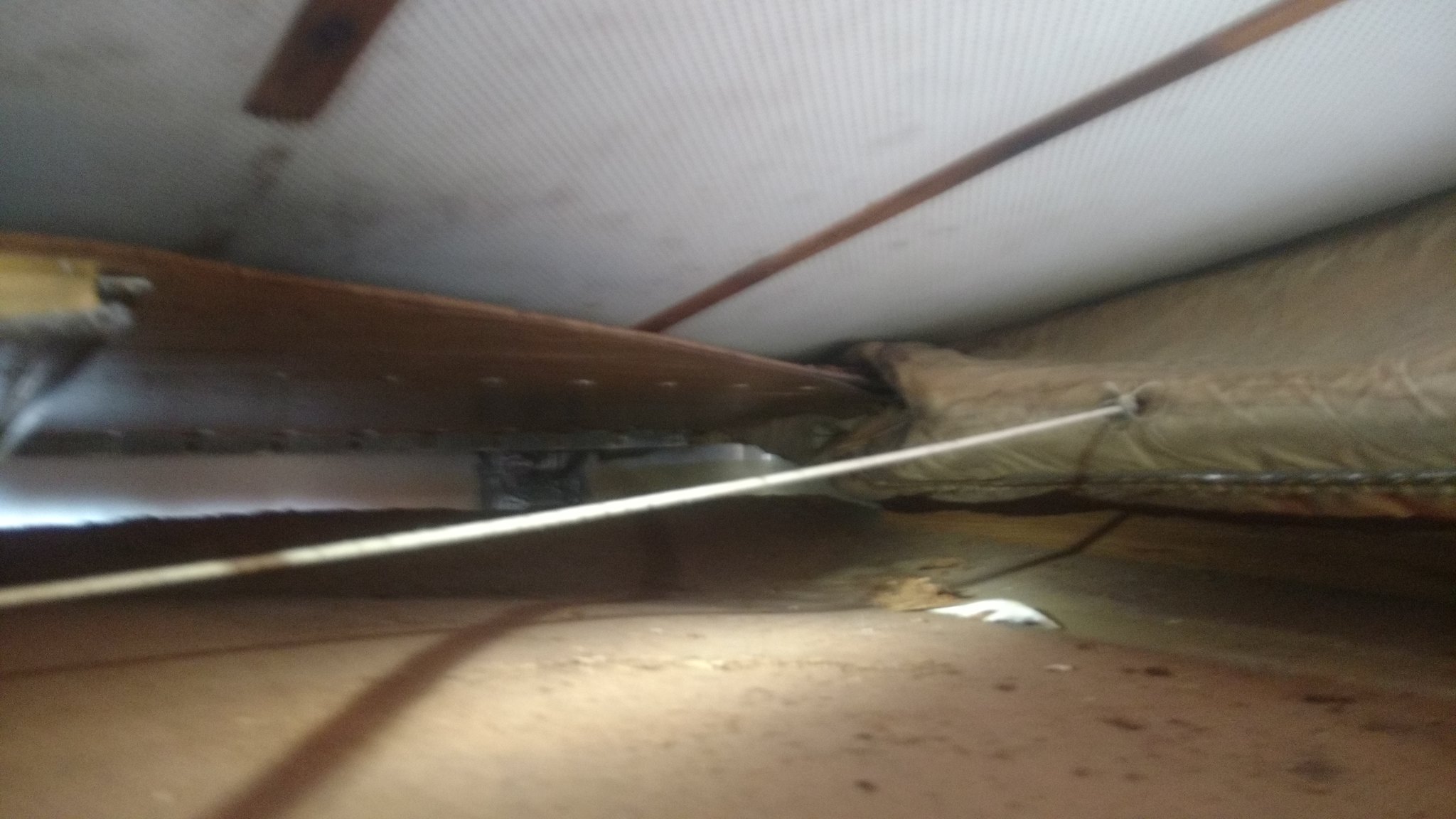 Cabover left side.  Yes that's daylight coming through the particle board.. 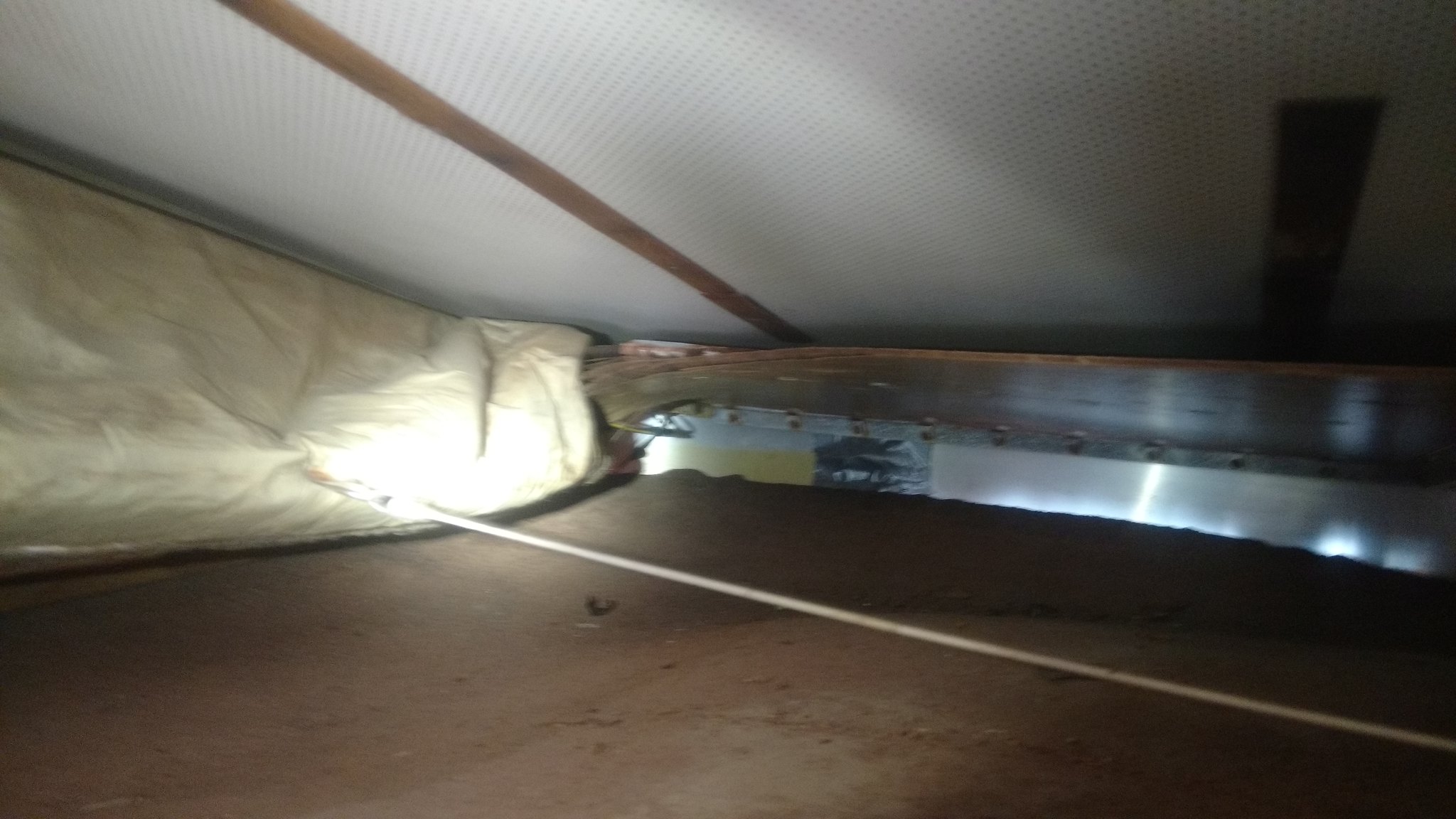 The front lift panel is crispy on the outer wings, but is a decent template.  Rear lift panel is in great shape.  Plan is to bring it home next weekend and get the help of a carpenter buddy that can do the wood portion.  I helped him lift his Jeep as he's less than automotive inclined and I'm a hack when it comes to woodworking.  We'll replace the particle board with marine grade plywood, with added sealer and possibly a thin fiberglass skin on the outer exposed portions.   We will also strip the grungy carpet off of the separate floor section and the carpet on the walls is coming off too.  The carpet may be replaced with laminate or remenants of our upcoming wood floor project in our house.  Then we can get the heater and stove working.  The refrigerator is a question mark.  I don't want to spend money here if it don't work.   I could buy a 12v portible unit that draws less amperage and isn't locked into this rig.

So that's the basic plan.  I will say I picked it up really cheap so I'm not too deep into this moneywise.  Usually these units only get sold with the Blazer they are bolted onto.   Timing was right as I had the money and was in the area to check it out.  The wood was a little understated in the ad, but knowing I've got a buddy that is very capable, I think it is very fixable.

I'll be posting the progress here as well as questions as they come up.  The progress will be slow once wheeling season is over and a few house projects get knocked out.  But the plan is to have it useable by the spring next year.

Nice find! Looking forward to the build. I think I recognize your buddies rig behind yours from ExPo

I love to see these older units kept alive, functioning, and providing shelter in the backcountry. Congrats and best of luck with your project!

Looks a little crusty at the moment, but totally fixable.

Going to be a cool project. Keep us posted.

What a nice project seems like it's in good shape and will give years of good service.

Haven't ever seen that combo out on the road,just photos.

Welcome to the "cult"

I am quite jealous of having a pass-through to the cab.  Something I can only wish for in my Tacoma.  Never having to climb out and in when using your unit is one headache forgotten.  Always liked the multi-function of the Blazer/Bronco/Jimmy design idea of friends rigs, but never seen one with a pop-up.  Good luck, please keep us abreast of your project as I would enjoy seeing your progress.

Thanks all.   Yeah my buddy's K10 is pretty well known on Expo, CK5 and the 67-72 Chevy truck page.  It's been featured in 4wheel and off road magazine too.   I've had the pleasure of camping out of that rig and knew I had to find a Blazer pop up for myself.  The pass through ability is a game changer though.   On his, you need to unlock and open the spare and fuel can swingouts, then the gate and then the camper door to get in.  I'll be building a bumper similar to his, but if I need to get in quick I just need to crawl over the console and I'm in.

First thing is just getting back from Denver.  My buddy has a small trailer that he offered to carry it with, but these campers are not like conventional slide in 4wheel campers.   They have a separate floor unit that goes in and the camper bolts onto the bedrails just like the factory Blazer fiberglass top does.  The problem is the back wall with the door hangs lower than the bedsides obviously.  So rigging up a solution to ride on a trailer and not have it catch the wind and get blown off of the trailer is a challenging problem.  After discussing it the best idea would be to use the trailer to carry the stock top back, load the camper on the Blazer and bring them back that way.  At least then it will be bolted down.  I just need to rent some camper jacks for the weekend to do the lifting.

We'll drop it at my buddy's place so we can mount it to the trailer so we have a way to roll it around when we work on it.

I'll keep up with the progress as it happens.   I really can't wait to have it operational and hit the trail with it.

Looks like a great project. It's always more fun to make it yours as you fix it.

If your work is anything close to Larry's this should make for a really nice rig. Met him at Mormon Lake a couple years ago & got look at his truck up close.

Had almost the same vehicle, '91 1500 Sub with the same rear axle swap and 8 lug front axle conversion. 5.7L/700/241 with 3.73's  Ran the now likely unobtainable Rancho K5 Pre-Runner front springs under it and got lots of comments about A) how well it rode & B ) "Those are really Rancho springs?!?!?!" (Not listed in applications, only in the numeric listing. I published the p/n in CK5's 'CoG' sub-forum some time ago.)

Really liked that truck, just for as big as it was not enough stow-away storage. Was always shuffling stuff around. About the only thing that I never cared for was the crude ABS it had. Ended up unplugging it after it caused a short lived flight and never felt it's loss.

If your work is anything close to Larry's this should make for a really nice rig. Met him at Mormon Lake a couple years ago & got look at his truck up close.

Had almost the same vehicle, '91 1500 Sub with the same rear axle swap and 8 lug front axle conversion. 5.7L/700/241 with 3.73's  Ran the now likely unobtainable Rancho K5 Pre-Runner front springs under it and got lots of comments about A) how well it rode & B ) "Those are really Rancho springs?!?!?!" (Not listed in applications, only in the numeric listing. I published the p/n in CK5's 'CoG' sub-forum some time ago.)

Really liked that truck, just for as big as it was not enough stow-away storage. Was always shuffling stuff around. About the only thing that I never cared for was the crude ABS it had. Ended up unplugging it after it caused a short lived flight and never felt it's loss.

Larry is the main reason my current K5 is the way it is.  He put a lot of time in doing the LS swap, axles, lift and cleanup/detailing at his place while I was stuck at work or after his girls bedtime.  I've been doing the fine tuning, little things to make it mine.  But he's taught me a lot to take my time, do it right, make it look factory and easy to service.   Besides the ORD parts in the suspension, the only aftermarket parts of the LS swap was the conversion mounts and TV cable kit for the trans, engine harness and controller.  The rest is stock GM stuff I can get at most any parts store anywhere.

The Rwal ABS system was a joke on these trucks for sure.   We ended up deleting it completely in mine.  We removed the module/pump and replumbed it with the lines and prop valve from an earlier truck.  Cleaner setup and again factory looking.  Easy to service too.  We tried bleeding through the old setup when we had hooked up the lines to the 14b and D44.   Stupid ABS prop-valve wouldn't stop leaking.  After a half hour fighting it we just pulled the junk off.

As far as ride quality goes, mine took a giant leap forward when I stuffed Bilstien shocks under it.   They even tamed the rough as hell rough country front springs I'm running.   Rear is very flexy with a ORD shackle flip and the stock springs.  Eventually I'll put some ORD custom Deaver springs up front, but the camper project will trump that for now.