A Grizzly Bear Terrorized a Man for Days in Alaska

5 replies to this topic

https://www.nytimes.com/2021/07/22/us/bear-attack-alaska.html?smid=url-share A Grizzly Bear Terrorized a Man for Days in Alaska. The Coast Guard Saw His SOS.

Down to his last rounds of ammunition, with bruises and a leg injury, the unidentified man was rescued by a helicopter crew that just happened by.

He was sleep-deprived and nearly out of ammunition, alone in the wilderness of Alaska. Well, not really alone.

For several nights in a row, the man had fended off the tenacious advances of a grizzly bear that had attacked him a few days earlier at a mining camp some 40 miles outside of Nome.

There was no way to phone for help. But then help found him.

En route to a mission on Friday, the crew of a Coast Guard helicopter saw the man waving both hands in the air, a widely recognized distress signal, the helicopter’s pilot said. On the tin roof of a shack, SOS and “help me” had been scrawled. The shack’s door had been ripped off.

The crew took the man to Nome to be treated for bruises to his torso and a leg injury that was not life-threatening, according to the Coast Guard. So ended a weeklong ordeal that could pass as a sequel to “The Revenant,” in which Leonardo DiCaprio was mauled by a computer-generated grizzly bear.

“At some point, a bear had dragged him down to the river,” Lt. Cmdr. Jared Carbajal, one of the pilots of the Coast Guard helicopter, said in an interview on Wednesday. “He had a pistol. He said that the bear kept coming back every night and he hadn’t slept in a few days.”

The Coast Guard did not identify the man, who rescuers said was in his late 50s or early 60s and had been staying in the shack since July 12 on the small mining claim. It was not clear how the man had reached the remote camp, which has no cellphone service and is in a river drainage area.

Commander Carbajal said that the Coast Guard MH-60 Jayhawk helicopter had changed its course by about a mile to avoid some clouds when something caught the eye of his co-pilot.

“He said, ‘Hey there’s a guy down there and he’s waving at us,’” Commander Carbajal said. “I said, ‘Is he waving with one hand or two hands?’”

“I said well, that’s usually a sign of distress,” the pilot recalled telling the helicopter’s three other crew members.

Lt. j.g. A.J. Hammac, the 35-year-old co-pilot, said in an interview on Wednesday that he saw the man stumble out of his shack. It was a curious sight for him. Lieutenant Hammac is based on Cape Cod in Massachusetts and is spending two weeks in Alaska for the Coast Guard.

“We don’t really come across people in the middle of nowhere,” Lieutenant Hammac said. “He was kind of struggling. When we came around, he was on his hands and knees waving a white flag.”

“He definitely looked like he had been out there for a while,” he said.

Rick Green, a spokesman for the Alaska Department of Fish and Game, said in an email on Wednesday that grizzly bears were prevalent in the area that the man had been rescued from, particularly during this time of year. The department did not have additional information about the attack or say whether it was investigating the encounter.

According to a 2019 report by Alaskan health officials, 68 people in the state were hospitalized for injuries sustained in 66 bear attacks from 2000 to 2017. Ten people died as a result of bear attacks during that period.

Petty Officer First Class Ali Blackburn, a spokeswoman for the Coast Guard in Alaska, said in an interview on Wednesday that it was unusual for a person to have several encounters with the same bear. She said the man’s situation had become increasingly dire.

“He only had two rounds left,” she said of his ammunition. “I’d imagine you’d be a little loopy after not sleeping for so long.”

The encounter served as a reminder of the importance of carrying an emergency beacon or satellite phone or texting device, according to the Coast Guard.

Commander Carbajal, 37, a Coast Guard pilot since 2009, said he had never been flagged down before by someone who needed to be rescued. It took about 15 minutes for the rescuers to fly the man to Nome, where, he said, the man insisted on walking himself to a waiting ambulance.

“You could tell he was starting to come off of the adrenaline, I think, and started to realize what happened,” he said. “He did not want to get in the gurney.”

The Coast Guard helicopter had been flying from Kotzebue to Nome, where the crew had been assigned the next day to fly a team of scientists to search the coastline for dead whales, walruses and seals.

“If we would have been in the next river valley over,” Commander Carbajal said, “we would have totally missed him.”

All I can say is WOW. For me that’s quite a story for several reasons. Thanks for sharing.

Old, bum around in Ford and an even older FWC Grandby

Along the Delaware water gap I sighted a black bear from afar.  But I do know there was a college aged hiker who was killed in Northern NJ about 2 to 3 years ago by one.  I imagine there's little comparison to the Grizzly though.

Thanks for commenting.  I'm not very good at socializing online or in person for that matter.  I have learned not to bother much anymore, but I thought someone here might find it of interest.  Maybe I'll be reincarnated as a Grizzly.  A misunderstood solitary beast.

For Grizzly Bears. In British Columbia, researchers have undertaken a unique challenge: tracking orphan grizzly cubs, reared in a shelter, to see whether they can thrive back in the wild.

This text is a link that should work for non subscribers for up till 14 days.

Whatcha got in there, a cute puppy dog? Haa 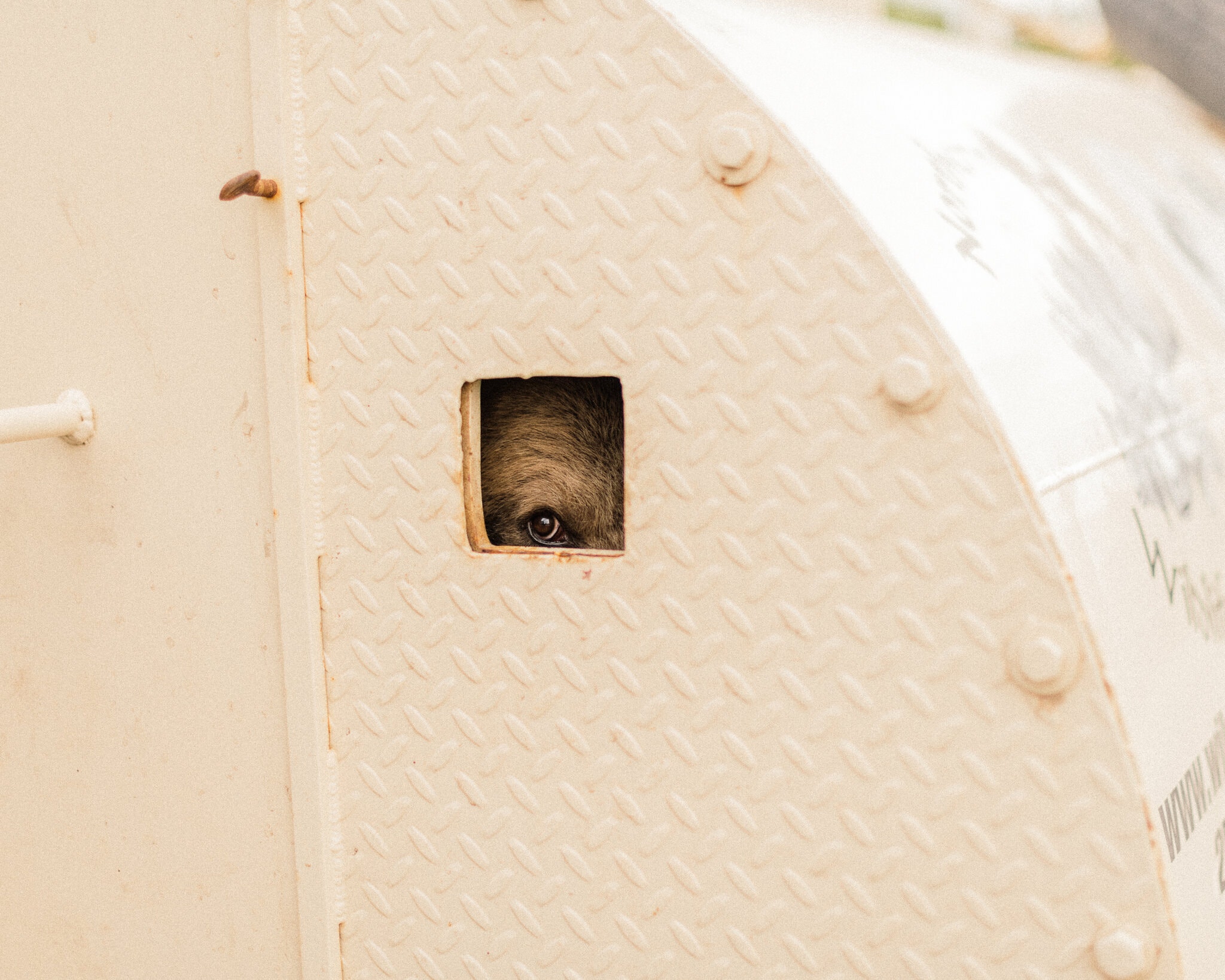 Predatory black bears are probably worse than grizzlies - unless you run into a predatory grizzly.

Predatory black bears are probably worse than grizzlies - unless you run into a predatory grizzly.

This black bear attack happened in May just a few miles from our home.

Back to WTW Lounge

Also tagged with one or more of these keywords: Grizzly, sos, alaska, mining