187 replies to this topic

Pricey stuff but my Atlas's have been taking a beating.

where did your source your l-track ??

where did your source your l-track ??

Sorry for the delay

Need to catch this thread up to date, sorry for the delay.....

Been quite a while since I've posted.  We've put over 5k miles on the van in our travels and have seen some amazing sights, I'll be posting pictures of our travels soon.   Here's a few misc photo's to catch the build thread up to date.

The covers have rare earth magnets sewn into the edges of the covers and they just stick in place.   The front units are the only ones that need to be removed and stowed, the remaining covers stay in place and just fold up or down (saving a ton of storage space!).

The split design on the rear windows came out great!

I went with the silver reflective covering on the windshield to help keep the heat out.

Here's a video walk through showing how the shades function, Simon turns out a great product!

A few more details....I like labeling :-)  Cut some custom stickers for the passenger seat base.

Time for Adventure Van Expo!  Headed down to St. Helens OR for this years AVE.  The event was quite a bit smaller than last year, I'm sure it was due to Covid, the event being pushed out twice while they tried to find a venue and it being later in the year.   I told Simon I would park my van in his Vanmadegear vendor booth and we had an awesome time.   Got to meet a ton of really cool people at the show, thanks to all who turned out.

Hanging at the show.

Setting up camp on the first day, the forcast was calling for rain and more rain.....ugg.   Had to make a temporary gap seal between the rack and the awning to keep water from dripping into the van when I left the door open.  Here I used a garbage bag but up into strips, worked perfectly.  I'll be fabricating a permanent solution to this in the near future.

While at the show I pulled the Maxxfan trim rings and installed rare earth magnets on the back side of the covers to accept Simon's insulated fan covers.   The magnets get taped in place then the trim rings re-installed.  The fan covers are great and just like the other covers they can be folded and left in place....nice!

Stopped at the WW1 Stonehenge memorial on the way home....always a cool stop.

While heading to the Adventure Van Expo in Oregon I was heading down the highway when a truck ahead of me started loosing large sheets of plastic out of their trailer. I tried to avoid them but one went under the van and I didn't see it come out, as soon as I was able to pull over I did so and found the plastic wound tight around the rear driveline. I cut the plastic off with my knife and all looked good, fast forward a bit and I get back home and start smelling burning oil, pull to the side again and yep...oil everywhere from a failed pinion seal and nice burning oil on the muffler...eewwww. Plastic must have made it to the seal......dang!!  Time to replace the Pinion Seal.

I ordered an OEM seal, nut and 4 replacement driveline bolts (these are set with stretch and non reusable).

I followed the Mercedes procedure and all went smooth. I used a 0-3.5nm torque wrench to measure the rotational drag torque both before nut removal and after I was finished, right on the money. The pinion nut is torqued to spec (30nm) then advanced in two stages at 15 deg each with 30 axle rotations (15 in each direction) between each step.. Zero axial play verified and then check again for proper drag torque, .1nm more than the starting torque....perfect.

Hard to see here but the entire underside of the van is wet in gear oil.

Up on the jack stands.

You can safely use a floor jack to lift the rear of the vehicle, just make sure you don't bend the diff cover.  My jack has a rubber pad in the lifting surface and I place the jack just forward of the cover.

Using a paint stick to index the propshaft to the hub, always a good idea to replace everything on a drive line exactly as it came off.

Propshaft tied up and out of the way.

Here I have the wheels removed and the diff drained of fluid.  I'm using a 0-3.5nm torque wrench to measure rotational drag torque before disassembling the flange.

Best not to use impact guns here.   I used a large pipe wrench to back up the flange and a large breaker bar to remove the nut.

Using a puller to remove the flange, not a lot of pressure is needed which was good since this was a poor puller and the only one I had on hand that would work :-)

Now we get a look at the old seal.....yep a piece of plastic stuck in the seal and caused the failure.   Dang plastic!!

A seal puller made quick work on removing the old seal.

The new seal comes pre-greased and ready to install.

A oil filter wrench made a perfect seal driver to install the new seal.

The new flange nut is first torqued to 30nm then you verify zero axial play, then rotate the axle 15 turns in each direction.  Next you tighten the nut 15 deg then rotate both ways again.  Next tighten an additional 15deg then rotate again.  At this point you check rotational torque again and it should be .1-.3nm higher than the original reading, mine was .1nm higher so It's right in spec.

Again I used the pipe wrench to back the flange while torquing the nut, it didn't leave any marks in the flange.

Now stake down the new nut to lock it into position so it can't move.

New propshaft bolts.  These bolts are tightened to stretch and can't be re-used.

The propshaft bolts are first torqued to 15nm then tightened an additional 90 deg of rotation.

Wheels back on and torqued to 177 ft/lbs.

And back on the road!

Picked up a low mile used 2018 Ural Gear Up.  Years ago I drove a BMW R69S with a Steib LS-200 hack and racked up a ton of miles on it over a couple year period.   Feels great to be back on 3 wheels again and the kiddo loves it! 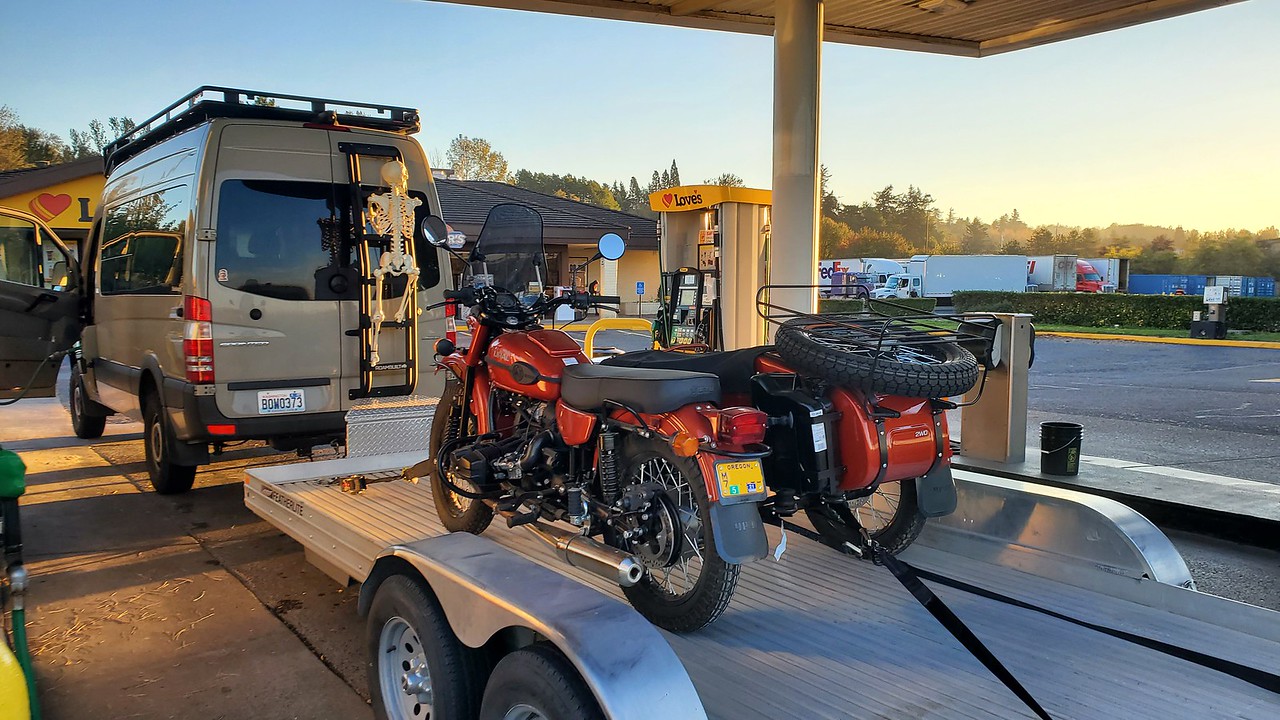 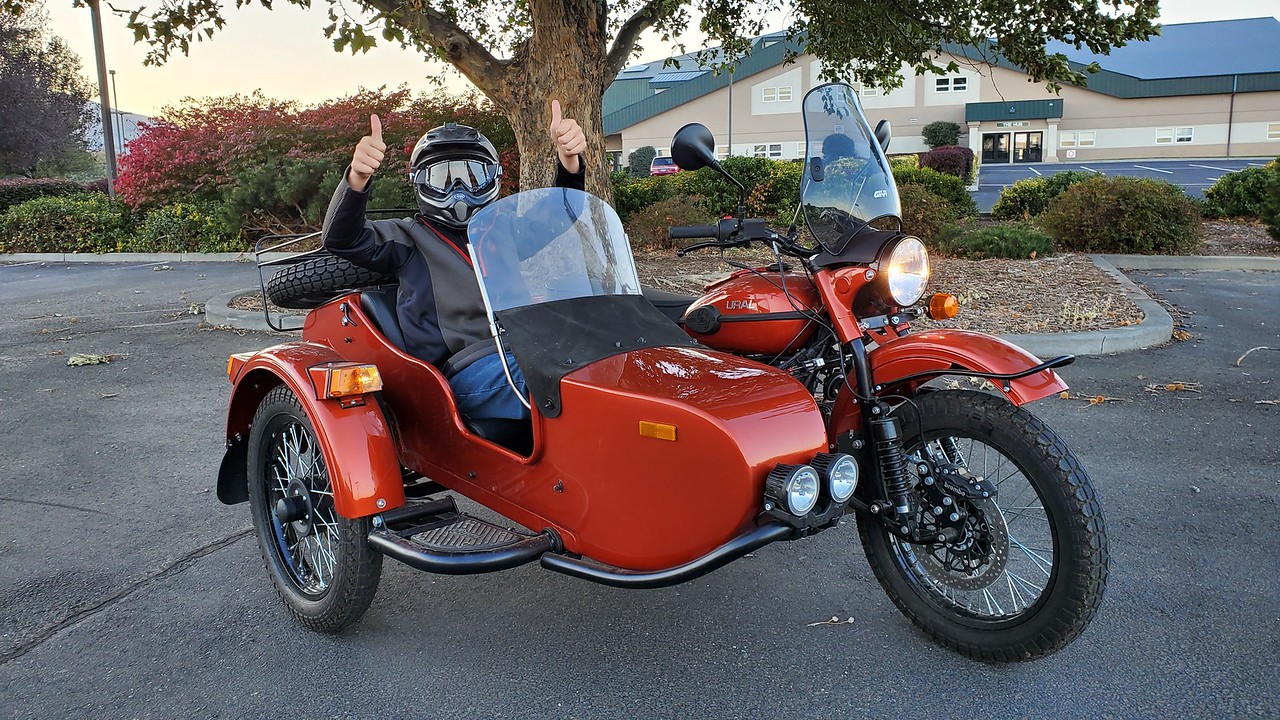 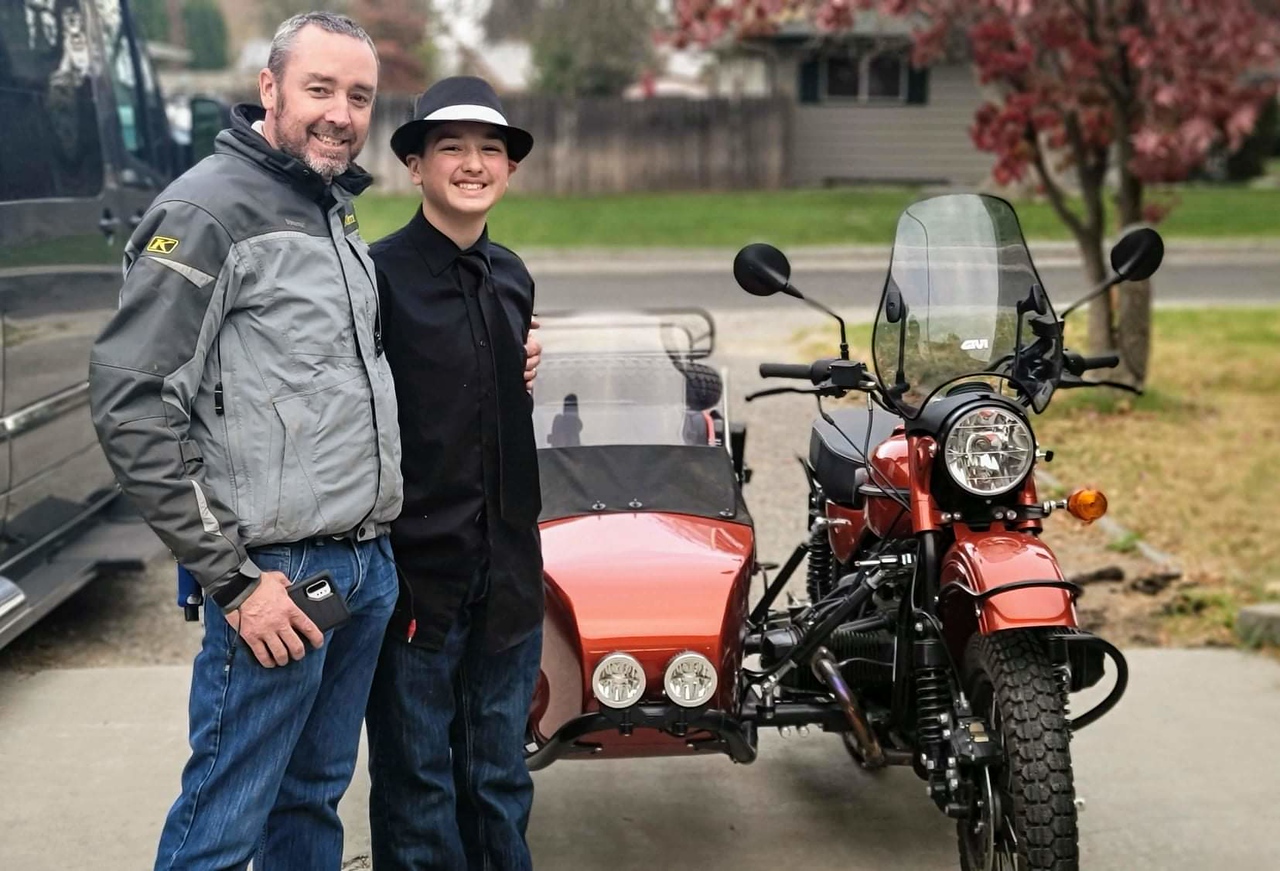 Time to finally start posting the TONS of photo's from this summers travels, It's been ages since I've caught the build thread up and with the holidays over it's time to start going through pictures and posting about the numerous road trips that we have taken with the Van this summer.

So I don't clog up the build thread with hundreds of photos I've started another page that I will be posting all of our travel photos and trip reports on.   I'll provide the link here and a few teaser pics below....

And a few teaser photos....

Also tagged with one or more of these keywords: sprinter, 4wd, 4x4, hodakaguy, hodaka